PARIS, June 4, 2019 /PRNewswire/ — Gustave Courbet was born on 10 June 1819 in Ornans, a small town in Franche-Comté that has been home to the Courbet Museum since 2013. This Monday, to mark the bicentennial of the birth of this major artist (more in terms of Art History than on today’s market…) the museum is opening an exhibition entitled “Yan Pei-Ming face à Courbet” that shows works by the painter of the Origin of the World alongside works by Chinese painter Yan Pei-Ming, who has been living in Dijon since 1980. 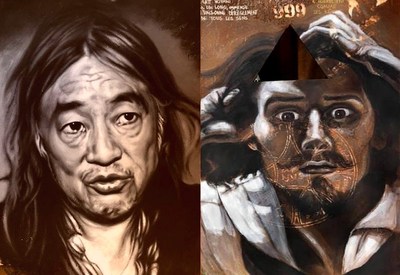 Some of Courbet’s self-portraits (The Desperate Man, The Wounded Man) and genre scenes (Burial at Ornans, Bonjour Monsieur Courbet [The Meeting]) are among the most famous paintings in art history. But Courbet’s œuvre also consists, above all, of a large number of landscapes and hunting scenes. Throughout his life, Courbet continued to paint what he really wanted to paint, true to his origins and to a fundamental attraction to woodland scenes, craggy cliffs and seascapes. It’s these works that make up the bulk of his auction market nowadays.

According to thierry Ehrmann, founder/CEO of Artprice: “Sometimes dark, sometimes radiant, there is something quintessentially contemporary about Courbet’s painting. In 2014, the Fondation Beyeler exhibited his works alongside works by market superstar Peter Doig who claims to have been heavily influenced by Courbet. We also know that Jeff Koons counts among his greatest admirers and also collects his paintings.”

Gustave Courbet’s work has been popular outside France for a very long time. His thirteen best auction results were all hammered in England and the United States and his current auction record – $15.3 million for Reclining Nude (1862) – was set by Christie’s New York in 2015. An exceptional amount for an exceptional painting. Confiscated in 1943 by the Nazi regime, it was returned to the heirs of Baron Ferenc Hatvany 62 years later. It was subsequently shown in the major Gustave Courbet retrospective presented at the Grand Palais in Paris, then the New York MET in 2007/2008.

However, that result was, and has remained, quite exceptional because Courbet’s larger works are extremely rare at auction: less than 2% of his auction lots reach the million-dollar threshold. The core of his market consists of works fetching between $10,000 and $200,000, mostly small oils-on-canvas, landscapes measuring less than a square metre. Courbet’s œuvre is almost entirely painted; only 20 drawings and 9 engravings have been auctioned since 2000, versus 352 paintings.

Like most 19th century artists, Gustave Courbet’s market is relatively immune to Art Market euphoria. But that hasn’t always been the case. His prices have stabilized over the last 30 years after enjoying extremely rapid growth in the 1980s. The successive sales of his painting Lisière de forêt (Forest Edge) (1865) – sold seven times at auction since its creation – perfectly illustrate the evolution of his market:

The most intense period of price growth corresponds to the Impressionist bubble of the 1980s, which economists have linked to the strong growth in the purchasing power of Japanese buyers who focused their acquisitions on European works from the second half of the 19th century and the beginning of the 20th century. It was at this time (29 October 1987) that Japanese collector Michimasa Murauchi acquired Le Chêne de Flagey (The Oak at Flagey) (1864) for $462,000 at Sotheby’s in New York. Five years ago, the Courbet Museum in Ornans managed to acquire the work, but it had to pay $5.5 million, i.e. 10 times more than its 1987 price.

The Oak at Flagey is a much larger canvas than Forest Edge (1865), but the difference in price between the two works in the late 1980s ($462,000 for the former, $198,000 for the latter) was much smaller than it later became in 2013 ($5.5 million versus $118,750). Congratulations to Murauchi for making such a superb acquisition in 1987. The following year the price of Forest Edge ($192,000) was probably already inflated by the impressionist bubble. Over the past 30 years, the price of this painting has fluctuated, while that of the The Oak at Flagey, on the contrary, has soared.