Artprice by Art Market: Will the Paris FIAC Be Able to Live Up to the Success of Frieze London?

PARIS, Oct. 16, 2019 /PRNewswire/ — These days, you are unlikely to bump into the new Giacometti or Picasso on the streets of Montmartre or Montparnasse. If you’re into visual arts, your best bet is to hit the Marais district and check out the galleries. At Emmanuel Perrotin’s on rue de Turenne, you’ll find works by the American Josh Sperling, the Korean Park Seo-Bo and the Mexican Gabriel de La Morta… while David Zwirner’s new space in the rue Vieille-du-Temple exhibits the creations of American artist Raymond Pettibon, his first solo show in the French capital since 1995. 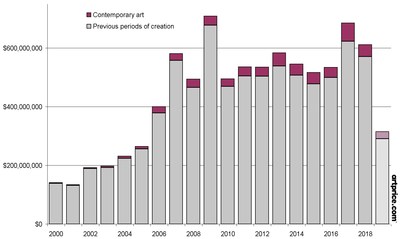 Better still, head to the Grand Palais this week, which is hosting the core of Paris’s International Contemporary Art Fair (the FIAC) until Sunday. Three weeks after the Frieze and the Frieze Masters in London, the FIAC puts Paris at the center of the Art Market with “197 galleries from 29 countries”. The FIAC also hosts France’s biggest artistic prize, the Marcel Duchamp prize, this year awarded to Eric Baudelaire, and the fair is now followed by several new Parisian art fairs (Asia Now, Art Elysées, etc.). But is that enough?

thierry Ehrmann, founder/CEO of ArtMarket.com and its Artprice department: “In Paris, Contemporary Art has accounted for 8% of fine art sales at auction for several years. In London the equivalent proportion is 20% and the UK capital’s total turnover on Contemporary Art is four times higher than that of Paris. The best-performing Contemporary French artist on the auction market, Robert Combas, ranks only 50th in our 2019 Contemporary Art Market Report behind 16 American artists, 11 Chinese, 9 English, 5 German, etc.

The French Art Market has not yet understood that Contemporary Art is the real driving force of the Art Market. The French capital clearly suffers from a sort of faddish institutionalised risk aversion that affects its museum programming, its public spaces and its auctions, giving preference to better-known and more consensual works.

Parisian museums clearly prefer the great Old Masters and the Modern avant-garde. Just look at the shows currently available: El Greco and Toulouse-Lautrec at the Grand Palais; Francis Bacon at the Pompidou Center; Hans Hartung at the Museum of Modern Art… and of course, the blockbuster “Leonardo da Vinci” show at the Louvre, as of 24 October.

Meanwhile, in London during the Frieze week, the Tate Modern hosted a massive fountain by the African-American artist Kara Walker in its huge entrance hall… a work that openly criticises British colonialism, funded by the Hyundai Commission. Apart from Paul Gauguin at the National Gallery, the museum programme in the British capital is dominated by Contemporary Art, with Olafur Eliasson at the Tate Modern and Antony Gormley at the Royal Academy.

London embraces Contemporary creation and plays the Art Market game without complex, especially vis-à-vis corporate patronage. Paris, in contrast, seems timid, often choosing to turn towards its glorious past when it attracted the likes of Leonardo da Vinci, Pablo Picasso, Zao Wou-Ki, etc. In short, France seems to distrust Contemporary Art: this past year, we have had another good example of this with several of the country’s prominent intellectuals expressing their distaste at the arrival of Jeff Koons’ Tulips… “Eleven colored anuses mounted on rods!” (according to Yves Michaux in l’Obs, 5 October 2019).

The difference between Paris and London is also reflected in the two capitals’ auction rooms. During the Frieze, Christie’s and Sotheby’s each hosted three sales of Contemporary & Post-War Art in London whereas in Paris, during the FIAC, the two major Anglo-Saxon auction houses will be hosting sessions of Impressionist & Modern Art.

Top 5 works available in Paris during the FIAC (estimates):

France remains an extraordinary “attic” for old masterpieces, as we have seen with the recent discovery in Dijon of a Christ Mocked by Cimabue (late 13th century). This exceptionally rare small painting will be offered for sale on 27 October 2019 by the Acteon Auction House in Senlis (near Paris) with an estimated value of $4.4 – 6.6 million.

However, even in that department, London has no reason to envy Paris. At the Frieze Masters, Trinity Fine Arts was offering a portrait of Michele Marullo Tarchaniota attributed to none other than Botticelli… for $30 million.

13th Edition of Renewable Energy India 2019: Witnesses a Strong Growth of 20% in Support of Green Energy