PARIS, Aug. 16, 2019 /PRNewswire/ — Although Photography currently accounts for just under 2% of the total value of the global secondary art market, the medium has become a permanent feature of the art world after a lengthy process of acceptance that dates back to the end of WWII and which has markedly accelerated in the last two decades. Today, the world’s most influential galleries all devote energy and space to the photography medium. David Zwirner, for example, officially represents 66 artists, of whom nine are photographers. 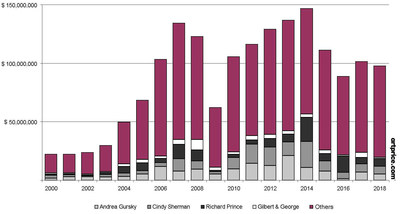 thierry Ehrmann, Artprice’s founder/CEO, sees extraordinary potential: “Photography’s share in the Art Market is not yet fully developed so it still offers exceptional opportunities for young art-lovers to start their collection. As the medium has morphed from analog to digital, an entirely new market has emerged with its own codes, its own references and even its own specific museology. This new market has managed to encompass the iconic photos of the major press agencies along with photographs created as art. The market recognises that as soon as the personality of a photographer permeates his/her work, the author of that oeuvre may be considered an artist. Artprice – the world leader in the collection and distribution of Art Market information since its creation in 1987 – has always considered photography an artistic medium in its own right. In the 1980s and 1990s it was still considered a ‘distant relation’ to Contemporary art.”

In historical terms, photography’s artistic maturity is happening now! That is why international events like the Rencontres d’Arles are so important and significant and why we are seeing the emergence of a number of new photographers whose market prices are moving very rapidly.

The four pillars of the market

Photographers whose works regularly fetch 7-digit sums (in USD) at auction can be counted on one hand. There is the German, Andreas Gursky, the Americans, Richard Prince and Cindy Sherman, and the British duo, Gilbert & George. Born in the 1940s and 1950s, these artists are represented by the prestigious galleries Gagosian, Skarstedt, Thaddaeus Ropac and White Cube who continue to show their new works.

At the 2013-2014 highpoint in global auction sales of photographs, these four top-selling signatures accounted for 38% of the segment’s total auction turnover. But their performances have substantially contracted over the past four years, as indeed have sales of all Post-War photography around the world. To a large extent, the results of these four photographers reflect the appetite of collectors for photography in general.

Nevertheless… the photography market is still four times bigger than it was twenty years ago.

Some 19 photographers, other than Gursky, Prince, Sherman and Gilbert & George, have generated at least one result above the 1 million-dollar threshold over the last 20 years. Among these we find Hiroshi Sigimoto (4), Jeff Wall (2), Piotr Urlanski (1).

Helmut Newton died in 2004 at the age of 84 and his prices are continuing to climb. He was in fact the top-selling photographer at auction in the first half of 2019 thanks to the sale of Sie Kommen, Paris (1981), a quadriptych measuring 193 by 88cm from an edition of 3, the first of which reached $1.8 million on 4 April 2019 at Phillips in New York. That result set a new personal record for Helmut Newton, but, more significantly, it was the year’s highest photography result so far.

Demand for work by Portuguese photographer Helena Almeida is also growing rapidly, albeit in a lower price range. A retrospective in Paris in 2016 and her death last autumn have largely contributed to inflating the prices of her works. On 20 February 2019, her Dentro de mim (2000) reached $128,000 in Lisbon, a posthumous consecration for an artist who twice represented Portugal at the Venice Biennale, in 1982 and again in 1995.

Photography remains a niche market in Asia… with the exception of Japan, of course, which clearly established itself as a world leader of the photography industry and has produced some of the most famous Post-War and Contemporary photographers, including Nabuyoshi Araki (b. 1940) and Hiroshi Sugimoto (b. 1948).

Chinese artists seldom choose to work exclusively in the photographic medium, but some use it occasionally like the artist Liu Wei (b. 1972). Recognized by the 2016 Award of Art China (AAC), he is famous for his futuristic oil paintings, as well as his videos and installations. But Liu Wei also produced one of the few Chinese photographs that has ever sold above $100,000 at auction. On 1 April 2019, one of five prints of his very large 5-part work entitled Landscape – shown for the first time at the Shanghai Biennial in 2004 – fetched $191,000 at Sotheby’s in Hong Kong.

Partners since 2009, in 2018, Artron and Artprice signed a historic agreement to create a “New Silk Road for Art”. This initiative is perfectly coherent with China’s “One Belt, One Road” (OBOR) or “Belt and Road Initiative” (BRI) launched in 2013 and known in Europe as the “New Silk Road”.