PARIS, Sept. 26, 2019 /PRNewswire/ — The 17.4% contraction in global art auction turnover in H1 2019 has highlighted the new disequilibrium between declining supply and ever stronger demand, especially for Modern Art masterpieces. Meanwhile… Sotheby’s Q2 2019 financial report (one of its last before the company is delisted) clearly points to rising operating costs. In short… the major auction operators urgently need to adopt strategies capable of perpetuating the growth of the Art Market (which essentially began half a century ago) by greatly enhancing the circulation of works and substantially reducing transaction costs. 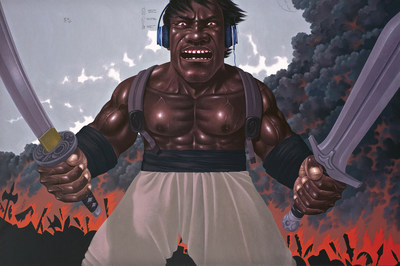 thierry Ehrmann, founder/CEO of Artprice, observes that, “the first results of the second semester already suggest the outlines of a new Art Market structure – a configuration that facilitates greater exchanges on a global scale and focuses much more on online sales.”

Christie’s kicks off the season in China

The world’s biggest art auction operator on the planet opened the second half of 2019 with a major Fine Art session in Shanghai. Benefiting from the absence of its Anglo-Saxon rivals in mainland China (since Sotheby’s quit Beijing in 2015), the first big sale of H2 2019 (20th century & Contemporary Art) generated handsome results showing a steady progression over 3 years for its late September Shanghai sale:

With a single unsold from the 30 lots offered during this prestigious session, including an imposing sculpture by Salvador Dali, a small abstract painting by Gerhard Richter and a rare photograph by Andreas Gursky, the Chinese art market proved it is not turning its back on the West…. However, East/West exchanges are currently being dampened by China’s import policy. The sales catalogue clearly indicated that the main lots “come from abroad” and can only definitively enter the People’s Republic of China after the relevant taxes and customs fees have been duly paid.

Among the lots covered by this clause was the evening’s star lot, Voie Lactée – 09.11.1956, by Zao Wou-Ki, which generated the world’s best Fine Art auction result this September. The work’s price has increased substantially over the last 20 years, during which Christie’s has auctioned it three times in Asia:

Christie’s has been trying to stabilize its sales in China for nearly 20 years now by developing a second marketplace to support its Hong Kong activity. After opening an outlet in Taipei from 1994 to 2002 and then testing Beijing for a year in 2006, Christie’s appears to have found the right solution with this prestigious Shanghai sale in late September. Earlier in the day (21 September) the same auctioneer also generated over $1.3 million from another sale entitled FIRST OPEN | Shanghai: Living With Art.

The British artist Stik (born 1979) already has a new auction record as the second semester gets underway. His work Liberty (2013), a complete set of 5 colour screen-prints (numbered AP 4/5) fetched $250,000 at Christie’s on 18 September in London. Stik’s work, first auctioned in 2016, is enjoying exponential demand growth: his 31 lots sold at auction this year have already generated more than a million dollars. He is now one of the most sought-after street artists on the market alongside Kaws and Banksy.

Meanwhile, the world’s top two auction houses both organised online Banksy sales in September. Sotheby’s (6-19 September) and Christie’s (11-24 September ) brought together a total of 74 small Banksy works… all of which were purchased. Girl with balloon (2004), numbered AP 51, reached $493,000 at Christie’s, suggesting a highly favorable context ahead of the sale of his painting Devolved Parliament (2009) which could well beat his current auction record of $1.87 million hammered at Sotheby’s New York for his Keep it spotless (2007) in February 2008.

In Paris, New York, Shanghai and Jakarta, the initial sales results for H2 2019 are therefore extremely promising. They show a strong demand for all segments of the Art Market and also illustrate the desire of collectors to dissolve the barriers that still hinder the circulation of works.

Saudi Arabia Opens to Tourists from Around the World