Artprice by Art Market: Cimabue… Another French Success, Along With the Lalanne Sale Last Week and Paris Photo 2019 Next Week

PARIS, Oct. 30, 2019 /PRNewswire/ — A small painting depicting The Mocking of Christ, and attributed by Eric Turquin’s team of experts to Cimabue, sold at Senlis Auction House near Paris for no less than $26.8 million on 27 October 2019. This is the best Fine Art auction result hammered in France since October 2017 when Alberto Giacometti’s sculpture Grande femme II (1960) fetched $29.5 million. 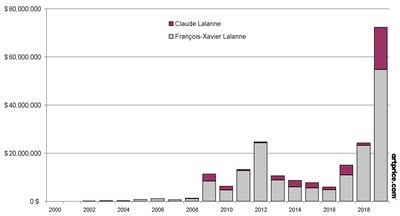 According to thierry Ehrmann, Founder/CEO of ArtMarket.com, “this is the third time in just two weeks that France has hit Art Market headlines. After a sensational record at $22.3 million for Nicolas de Staël’s painting at Christie’s Paris during the Fiac, and then the huge success of the ‘Univers Lalanne‘ sale at Sotheby’s, it’s a small panel attributed to one of the fathers of the Italian Renaissance and modestly estimated at $4.4 – 6.6 million that generated a sensational result in Senlis (not far from Paris) on Sunday. France has proved it is not only capable of attracting exceptional pieces to its museums, it is also capable of attracting exceptional works to its auction rooms and of hammering exceptional results. Moreover, with Paris Photo next week, France will once again prove its pioneering role in the global Art Market.”

The ‘alpha’ of the Italian Renaissance

In Art History, Cenni di Pepo, known as Cimabue, is recognised as the key figure in the start of the Italian Renaissance, during which Western Art finally emancipated itself from Byzantine art. While he still used an egg tempera technique, his work introduced fundamental innovations regarding the representation of space, people and light, which were explored and developed by Italian painting for several centuries thereafter. Cimabue taught Duccio and a shepherd named Giotto, both of whom went on to play major roles in the history of the Sienese and Florentine schools.

The only other Cimabue work to be auctioned in the last forty years, Madonna and Child, belonged to the same polyptych as The Mocking of Christ. Offered for sale by Sotheby’s in July 2000, the work was finally acquired by the National Gallery in London. The third known panel from this polyptych, The Flogging of Christ, has been in New York’s Frick Collection since 1950.

Cimabue’s place in Western Art History is fundamental and the rarity of his works justifies the value of this small panel: more than $51,000 per. That’s well below the $150,000 per square centimeter paid for Leonardo da Vinci’s Salvator Mundi in November 2017, a painting that is expected (but has still not appeared) in the Louvre exhibition commemorating the fifth centenary of the Tuscan genius’s death.

96% of lots sold above estimates at the “Univers Lalanne” sale

The French capital excels at exhibiting works from all periods of Art History, with the same enthusiasm. Thus, while Christie’s and Sotheby’s organised sales dedicated to the first half of the 20th century, and Contemporary art took centre stage at the Grand Palais with the FIAC, the city’s museums have been simultaneously showing:

As the French capital entertains a positive attitude to Art & Design, one of the key moments of this month of October 2019 was the sale of the Claude & François-Xavier Lalanne Collection at Sotheby’s. Organized over two days, the session saw almost all of the 274 lots reach beyond their estimates, generating a total of over $100 million.

Among the most impressive results: $55,700 for a set of two Lettres aux colombes drawn and written by Yves Saint Laurent, estimated between $700 – 900!… and the star lot of collection, François-Xavier Lalanne’s Rhinocrétaire, reached $5.4 million against an estimate of $780,000 – 1.1 million.

Ahead of the major New York sales, the French capital is once again poised to blaze with Paris Photo, undoubtedly the world’s biggest fair dedicated exclusively to the photography medium. The event brings together the market’s most prestigious players including the Magnum agency, the galleries Xippas, Karsten Greve, Lelong, Nathalie Obadia, Les Filles du Calvaire, and a collaboration between the galleries Gagosian and 1900-2000.

Photography accounts for just 0.9% to 1.2% of global Fine Art auction sales. But, unlike painting or sculpture – which nowadays are seeking new modes of expression – photography is an art form in the making, evolving with the latest technological advances and whose most sought-after artists are alive and active today.

Nevertheless, the Photography segment of the Art Market has contracted somewhat over the last 5 years. In 2014, the segment’s global auction turnover reached $220 million compared with just $135 million last year. But… with 17,000 lots sold in 2018, the market has never been so dense. We can expect to see a return to growth in 2019, with 13,000 photographs already generating more than $100 million so far this year.

Discover the alchemy and universe of Artmarket and its artprice department http://web.artprice.com/video headquartered at the famous Organe Contemporary Art Museum “The Abode of Chaos” (dixit The New York Times): https://issuu.com/demeureduchaos/docs/demeureduchaos-abodeofchaos-opus-ix-1999-2013