Artmarket.com: Frieze London in the context of Hong Kong’s rapid growth and other art market changes observed by Artprice

PARIS, Oct. 13, 2022 /PRNewswire/ — After the UK posted an overall art auction turnover up 26% for the first semester of 2022 (its best start to the year in three years), London is hosting Frieze and Frieze Masters. Alongside these fairs (open to the public from 12 to 16 October in Regent’s Park) there will of course be several prestige sales in the city. Long the capital of the world’s art market, London remains the second biggest marketplace on the planet. But faced with the consequences of Brexit, the rise of Hong Kong, and the digitalization of art, London can no longer take its position for granted. 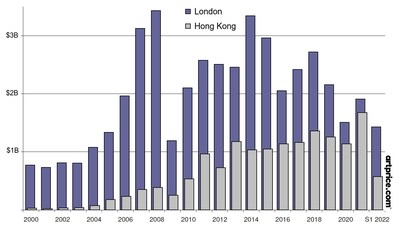 “In the 18th century, London saw the birth of the major auction houses Christie’s, Sotheby’s, Phillips, and Bonhams” recalls thierry Ehrmann, CEO of Artmarket.com and Founder of Artprice. “In the 20th century, New York became the nerve center of an increasingly globalized art market that become substantially more fluid with the arrival of telecommunications, and then later, the Internet. Today, you have masterpieces selling at top prices in Hong Kong, you have Paris hoping to take advantage of the fallout from Brexit, and you have a whole section of the art market heading into Web3 which will further intensify the market’s decentralization“.

As global competition grows and multiplies, London can count on a rock solid reputation for sales of Old Masters, Modern art, and Post-War art; but it must also assert itself as a center of exchange and innovation for Ultra-Contemporary art. Fueling and fueled by massive price hikes (and the NFT revolution), this segment has become the primary driving force of the global art market, and Hong Kong’s growth has entirely captured this phenomenon.

A network of Frieze-branded fairs

In the art world, a synergy generally emerges from a mixture of styles and eras, hence, for example, the incursions of Jeff Koons, Takashi Murakami or Anish Kapoor at the Palace of Versailles. This type of mix also partly explains why galleries like to present young artists alongside the most well-known and recognized names of 20th century art, whose estates they represent. Frieze also plays this card by jointly organizing a fair dedicated to Contemporary Art and another dedicated to Old Masters, putting contemporary creation into an art-historical perspective. Some prestigious galleries, including Continua, Kamel Mennour, and Skarstedt, actually prefer to focus more on the ‘past’ than on the ‘present’, whereas one would have expected the reverse.

The Frieze Group has also recognized the advantages of geographical diversification in the premium art market, following in the footsteps of major auction houses. Launched in the early 2000s in the center of the English capital, Frieze was subsequently exported to the USA; first to New York in 2016, then to Los Angeles in 2019. This year, it has been replicated in Asia with the first edition of Frieze Seoul, and can now claim to be the most serious competitor to the MCH group. The latter organizes the prestigious Art Basel fairs in Basel, Miami, Hong Kong, and, very soon, in France, with Paris+ (from 20 to 23 October 2022) at the Grand-Palais Éphémère.

In 2021 Hong Kong ($1.7 billion) was not far behind London ($1.9 billion) in terms of Fine Art auction turnover. But if we look specifically at the Contemporary Art segment (artists born after 1945), the comparison is favorable to Hong Kong ($700 million vs. $432 million in London). Asian buyers are driving the prices of Contemporary works faster than anywhere else in the world. Indeed… with just 2,160 Contemporary lots (a third of London’s 6,500), Hong Kong’s art auction market posted by far the highest average price for Contemporary artworks on the planet: $325,000 in 2021.

2021 auction turnover by period of creation, London vs. Hong Kong

The major auction houses appreciate the energy flowing through China’s “Special Administrative Region”, and they are increasingly preferring it to that of the English capital for some of the most emblematic signatures of the 20th and 21st centuries like Jean-Michel Basquiat, Gerhard Richter, and Adrian Ghenie. Indeed the major auction houses’ strategy of alternatively offering works by the most fashionable artists in New York, London, and Hong Kong is having a defining impact on the relative successes of America, Europe, and Asia on the global art auction market.

In this context, Phillips is increasingly relying on this dynamic to incentivize its sales of Contemporary and Post-War art which, along with watchmaking, jewelry and design, have become its specialties. In parallel, Phillips has recently announced a partnership with Yongle to host sales in Hong Kong and Beijing, underscoring the enormous attraction of the Chinese art market. Already in 2021, Phillips partnered with Poly Auction to organize four sessions that totaled $176 million.

As the art market reconfigures…

For the time being, London retains an undeniable place in the triumvirate that dominates the global art market. The UK capital even seems to have found its way back to growth, although its auction turnover totals are still much lower than in 2008 or 2014. Moreover, while London outbid Hong Kong in H1 2022, that may not have been the case if China had not imposed a drastic zero-covid policy in H1. The Hong Kong market will most likely pick up again in the second half of this year.

Meanwhile… just a week after Frieze London, Paris will be hosting the prestigious Paris+ by Art Basel fair. A lot of questions and expectations surround this first edition of Paris+ (which replaces the FIAC).

As regards the digitalization of art and the art market, things are moving rapidly with the deployment of Christie’s 3.0: nft.christies.com.

London may be able to draw on its long history and strong reputation for Fine Art sales. But it cannot ignore the energy that is today emanating from the Ultra-Contemporary and art-NFT market.

Artmarket is a global player in the Art Market with, among other structures, its Artprice department, world leader in the accumulation, management and exploitation of historical and current art market information in databanks containing over 30 million indices and auction results, covering more than 793,000 artists.

Artprice by Artmarket, the world leader in information on the art market, has set itself the ambition through its Global Standardized Marketplace to be the world’s leading Fine Art NFT platform.

Artmarket with its Artprice department accumulates data on a permanent basis from 6300 Auction Houses and produces key Art Market information for the main press and media agencies (7,200 publications). Its 5.4 million (‘members log in’+social media) users have access to ads posted by other members, a network that today represents the leading Global Standardized Marketplace® to buy and sell artworks at a fixed or bid price (auctions regulated by paragraphs 2 and 3 of Article L 321.3 of France’s Commercial Code).

The Artprice 2022 half-year report: the art market returns to strong growth in the West:
https://www.artprice.com/artprice-reports/global-art-market-in-h1-2022-by-artprice-com

Index of press releases posted by Artmarket with its Artprice department:
serveur.serveur.com/Press_Release/pressreleaseEN.htm

Discover the alchemy and universe of Artmarket and its artprice department https://www.artprice.com/video headquartered at the famous Organe Contemporary Art Museum “The Abode of Chaos” (dixit The New York Times): https://issuu.com/demeureduchaos/docs/demeureduchaos-abodeofchaos-opus-ix-1999-2013

ZettaScale to demonstrate Zenoh and Cyclone DDS protocols at ROSCon 2022