Artmarket.com: Banksy is the top living artist in Artprice’s turnover ranking for H1 2021. The Art Market recognizes Street Art as a major and globalized discipline

PARIS, Aug. 31, 2021 /PRNewswire/ — Will future generations consider Banksy the most important artist of the early 21st century? In any case, that’s what the $123 million hammered in the first half of 2021 suggests, giving Banksy 5th position in Artprice’s general ranking (all periods combined) just behind the giants Picasso, Basquiat, Warhol and Monet.

Whether we like it or not, a page in Art History is being written and it can no longer be seen as ‘just a fad’. After 25 years tackling universal issues (that are far from being resolved) by taking them into the streets and inviting them into our daily lives, Banksy’s highly topical works are today driving the growth of his market more than ever before. 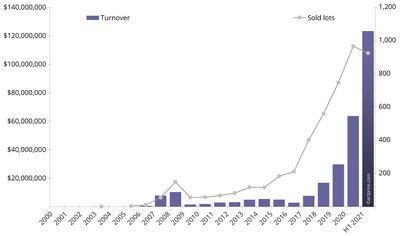 thierry Ehrmann, CEO and Founder of Artmarket.com and its Artprice department: “Demand for Banksy’s works has been growing exponentially for five years. It is already too late for museums to hope to acquire original works at reasonable prices. But who could predict that this anonymous street artist, turning his back on the system, would become the most successful living artist on the Art Market? A few years ago, the Tate Modern apparently refused a donation from the artist … Since then, Banksy has become a genuine symbol, made stronger by each crisis (financial, health, etc.) that our world encounters.”

Banksy’s work has pursued a tradition that began with Ernest Pignon-Ernest and Blek le Rat, but he brought the art of stenciling into the 21st century. Each new work discovered in the streets of Bristol or the ruins of Gaza or on the back door of the Bataclan in Paris or in the New York subway has been photographed, publicized, liked, shared, even appropriated … before being removed, as is still too often the case, by the city’s cleaning service, or, in some cases stolen.
A brilliant drawer and very clever with his locational choices and the diffusion of his works, Banksy has brought to life an oeuvre that is spectacular and rhizomatous in nature. Each new piece carries a message for everyone, regardless of our age, language or knowledge of art history.

Taken together, Banksy’s works have, for a quarter of a century, formed a gigantic fresco that depicts the sorrows and challenges of our society, both present and future: climate change, war, inequality, terrorism, etc. His work increasingly stands out as a political weapon via projects with an audacity unprecedented in art history: his ‘bemusement’ park Dismaland (2015), the Walled Off Hotel in Bethlehem (2017) and his migrant boat Rescue (2020), to name but a few.

While Banksy remains first and foremost a committed street artist who seeks a sort of perfect equilibrium in both space and time, his work has subsequently been made available practically ad infinitum. By reusing his stencils for several years on canvas or cardboard, by printing limited editions, by uploading photos to his Instagram account and by having his works reproduced on cups, magnets and key rings, Banksy has made his work omnipresent in our daily lives.

John Russo, Group CEO of Maddox Gallery: “When you consider the widespread and global acclaim that Banksy has achieved as an anonymous living artist, whose practice is an art form that for centuries has been considered vandalism, he’s single-handedly changed the face of contemporary art as we know it. This, combined with his engagement with current affairs and witty immortalization of public opinion has not only allowed him to capture the zeitgeist of our time, but also to open the gates of the contemporary art world to a new era of creatives.”

Compared with Beeple, whose digital works are followed daily by 2.2 million followers on Instagram and whose NFT Everdays fetched $69.3 million in March 2021, Banksy’s work actually responds to an extremely pressing demand for art that looks straight into the eyes of our present and sounds alarm bells for the future. Paradoxically, his work criticizes the very society that acclaims him. Highly cynical (Laugh now), his work nevertheless gives a preponderant place to tenderness (Flower thrower), humour (Che Guevara on Skates), hope (Girl with balloon) and it always seeks to surprise.

Banksy’s pieces are rarely sold on the primary market, except as a happening (in New York, Venice or on shop.grossdomesticproduct.com), but they circulate abundantly on the secondary market, whether in galleries, on the internet or in public auctions. More than 1,200 of his works were offered in auctions during the first semester of 2021, three-quarters of which found buyers (only 23% unsold).

Entire sessions are devoted to him at Sotheby’s, Christie’s, or Forum Auctions, covering all price ranges from original works at several million dollars and highly sought-after artist’s proofs to prints and sculptures in more or less limited editions, signed or unsigned. This intense transaction level is overseen by an authentication system set up by the artist himself, the ‘Pest Control Office’.

John Russo, Group CEO of Maddox Gallery: “The magic behind the story of Banksy is that he has achieved what every artist wants to achieve: success on the secondary market. With Banksy last releasing an edition in 2010, purchasing a Banksy on the primary market has been impossible for most collectors.

With Pest Control at hand, however, to authenticate works in circulation on the secondary marketplace, Banksy has engaged his followers in a simple game of economics. By drastically limiting the supply of his work, he’s driven up the value of the pieces in circulation, allowing his early followers the opportunity to realize an incredible return on their purchase.

For those that have purchased from a reputable gallery with a close working relationship with Pest Control, as we are proud to say that we have at Maddox, Banksy investors will have achieved a considerable profit in the past decade, with our own clients realizing an average profit of 42.6% in 2020 alone.”

I Can’t Believe You Morons Actually Buy This Shit

When Banksy has tried to undermine the very market that has elevated him to stardom (albeit anonymous), it has had the opposite effect: when his Girl with balloon (2006) partially self-destructed just after being hammered down for $1.4 million in 2018, its value is said to have risen substantially. This spectacular turn of events was so well orchestrated that some suspected collaboration between the artist and Sotheby’s: how could the shredder have escaped the prestigious auction house’s attention? Clearly Banksy doesn’t suffer too much from bad luck.

And yet… he is also capable of playing the market’s game when it is for ‘a good cause’. Earlier this year, he sold his canvas Game Changer (2020) in order to refinance Southampton hospital in the midst of the health crisis. The work fetched a record $21.9 million, i.e. 17% of his total auction turnover in the first semester of 2021.

In H1 2021, Banksy’s market was mainly split between the United Kingdom (64% of his auction turnover), the United States (15%) and Hong Kong (13%). This triangular market, more and more evenly distributed between the three major capitals of the global art market, fully contributes to the rise in the value of his works. This is perfectly illustrated by the three auctions of his small canvas Laugh Now But One Day We’ll Be in Charge (2000):

At 47 (his assumed age) Banksy is an international superstar, adored by the street art community and art market professionals alike, with 11 million followers on Instagram. But unlike many influencers, Banksy cares less about his personal image than about his art, which questions the future of our planet and Humanity as we know it.

Artmarket is a global player in the Art Market with, among other structures, its Artprice department, world leader in the accumulation, management and exploitation of historical and current art market information in databanks containing over 30 million indices and auction results, covering more than 770,000 artists.

Index of press releases posted by Artmarket with its Artprice department:
serveur.serveur.com/press_release/pressreleaseen.htm

Discover the alchemy and universe of Artmarket and its artprice department https://www.artprice.com/video headquartered at the famous Organe Contemporary Art Museum “The Abode of Chaos” (dixit The New York Times): https://issuu.com/demeureduchaos/docs/demeureduchaos-abodeofchaos-opus-ix-1999-2013