PARIS, March 30, 2021 /PRNewswire/ — Investing tens of millions of dollars in works by Beeple or Banksy may seem extravagant today, but acquiring the most expensive artworks is statistically a winning strategy. Academic studies[1] have shown that a masterpiece effect does indeed exist on the art market: the most expensive works continue to gain more value than the rest of the market. This is corroborated by the analysis conducted by Artprice’s valuation service – Artpricing – on the five top-selling artworks in 1999. 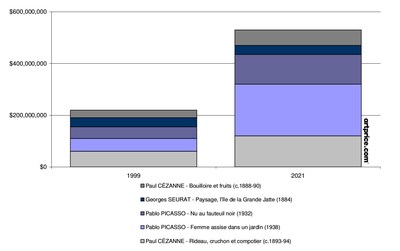 “By following the five most expensive masterpieces of 1999, Artprice finds that what was considered ‘exorbitantly expensive’ 22 years ago is no longer considered as such today, explains thierry Ehrmann, President and Founder of Artmarket.com and its Artprice department.

“Imagine that in the first quarter of 2021, you acquired the Boticelli portrait, Beeple’s NFT and the three paintings by Basquiat, Banksy and Picasso. How much will these works be worth in a quarter of a century? The future will tell us which are the best operations, but experience so far suggests that a strategy of buying the most expensive works pays the highest dividends”.

The 5 most expensive works at auction in 1999 vs. Artpricing’s low estimates in 2021

The price of Paul Cézanne’s still lifes has thus doubled since 1999. This has been confirmed by several other examples, including Still Life (c.1890) purchased for $3.8 million at Sotheby’s in New York on 11 November 1999 and resold for $8.1 million on 14 November 2017 by the same auction house, generating a capital gain of +110%.

Nude in a Black Armchair (1932) purchased in 1999 has a twin work on the market: same title, same year of creation, same dimensions, same subject (one could be mistaken for thinking they were the same painting). However, in May 2010, the price of this twin work reached $106.5 million. It therefore seems reasonable to estimate the current value of each of the two works at around $120 – $150 million.

On the other hand, the value of Georges Seurat’s Paysage, Île de la Grande Jatte (1884) has probably not changed much in 22 years. The work still holds the artist’s auction record, but unlike Paul Cézanne’s still lifes, which have doubled in value, recent Seurat results suggest the value of this painting hasn’t evolved that much.

In May 2018, La rade de Grandcamp (1885), a canvas of the same dimensions as Paysage, Île de la Grande Jatte (1984) and of the same quality, reached $34 million at Christie’s in New York. This result suggests that collector demand for Seurat’s works has remained roughly constant over the past 22 years.

In conclusion, the combined purchase value of the five top results of 1999 was $219.8 million, and, according to the analysis conducted by Artprice’s Artpricing service, the current low estimate for the value of this group of works is around $530 million.

Artpricing, price estimate reports by Artprice: Fill out the form online and receive an estimate report produced by our specialists within 3 days: https://www.artprice.com/estimate

Artmarket is a global player in the Art Market with, among other structures, its Artprice department, world leader in the accumulation, management and exploitation of historical and current art market information in databanks containing over 30 million indices and auction results, covering more than 770,000 artists.

Index of press releases posted by Artmarket with its Artprice department:
serveur.serveur.com/press_release/pressreleaseen.htm

Discover the alchemy and universe of Artmarket and its artprice department http://web.artprice.com/video headquartered at the famous Organe Contemporary Art Museum “The Abode of Chaos” (dixit The New York Times): https://issuu.com/demeureduchaos/docs/demeureduchaos-abodeofchaos-opus-ix-1999-2013 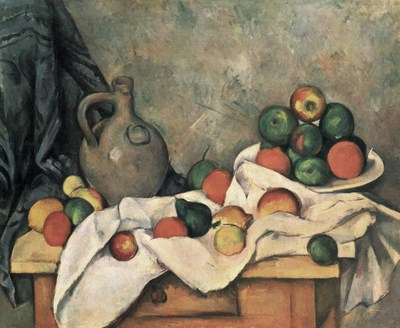