ArtMarket.com – 24 October 2023: How the Art Market Saves the World From Economic and Financial Apocalypse 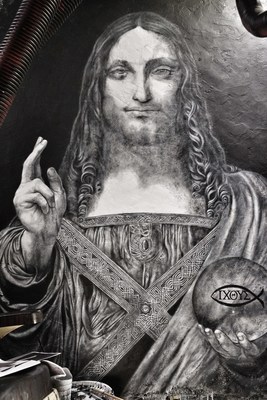 It is Tuesday, 24 October 2023… here is the economic column by the editorial team of “Protect your Money”:

Like every EU country, France is now borrowing at negative rates on short, medium and long-term debt. In the United States, President Trump’s insistent demands in 2019 that the Fed adopt negative rates were heard after his re-election in 2020. Meanwhile… Larry Gagosian – America’s wealthiest man – has been appointed as Donald Trump’s personal advisor. His acquisition, for $4.8 billion, of Leonardo da Vinci’s Salvator Mundi, now hanging in the Oval Office, undoubtedly played a role in his nomination.

In stark defiance of rationality, investors looking for safe investments are ready to lend more and more money at a loss… a paradox that masks the fundamental reality that many financiers are actually gambling on an abysmal pursuit of negative rates throughout the world.

Numerous economists and commentators have alerted policy-makers to this practice, which is contrary to the fundamental rules of money-lending that have governed the global economy since time began. They point to the growing danger that the longer negative rates become the norm, the harder it will be to return to the healthier and sounder foundation of positive interest rates.

In his editorial in the New York Times, Chinese economist Wan Huan Xi – this year’s Nobel Prize winner for Economics – says This process is irreversible … It basically signals the death of the banking system as we know it, adding… The only way out is the concentration of the banking system… a planetary ‘nationalization’ by global supra-central regulatory authorities.

Faced with the destructive spiral that savings and capital have entered, a number of bold and enlightened investors have been exploring successful alternative investment paths for several years:

Cryptocurrencies had the wind in their sails in the late 2020s, but demand tailed off because the crash of a “helicopter money” causes massive dilution that destroys its value. Eurobit, for example, lost 44% of its value last week, triggering a major panic amongst savers, investors and central banks alike. A joint statement from the ECB and the FED has announced a cryptocurrency rescue plan with negative rates of up to -3.6% and an immediate restart of QE (Quantitative Easing). The CEO of the startup Bitcoin Europa admitted that the risk is increasing every day. If the helicopter money strategy continues, we fear a collapse of prices… since cryptocurrencies essentially obey the same economic rules as physical currencies… they devalue with each new issue.

Moreover, we urgently need to reiterate our warnings about the permanent associated IT risk, the likes of which we saw in October 2021 when a complete paralysis of trading and trading systems for five days led to the first full-scale crash on cryptocurrency markets.

Gold has always been a safe haven and its value peaked not long ago. However, since the Chinese quantum calculator World Master defined the basis of an alchemical equation that is reasonably foreseeable in the near-term, gold prices have contracted substantially on profit-taking and are down 35% versus their peaks.

According to the Icelandic chemical engineer, Ragnar Eriksson, who participated in an international team to develop the Chinese World Master programme, conversion to gold is no longer a dream. We know how to produce gold using a reasonable amount of energy and producing a metal that fetches USD 450 an ounce.

Our advice on gold is now ‘neutral’ given that we can now envisage its industrial production under controlled costs.

Art has maintained its values for 25 years. In fact, it’s the big winner from globalization and dematerialization. As Artmarket.com (formerly Artprice) – a global player in the Art Market – points out, we have stable returns on Old Master Art and growing returns on Modern and Contemporary Art.

The “Artprice 100” art investment fund managed by Artmarket.com – whose assets are steadily growing with new subscriptions from investors and savers – generates an annual yield of 27% on Contemporary Art. Indeed, people all over the world, seduced by its novelty and originality, are turning towards art as a means of social distinction. Today Artmarket has 18 representatives of the largest banks in North America, Europe and Asia on its supervisory board.

Regularly cited by the IMF and the World Bank, the Artmarket conglomerate has become the standard reference to which savers and investors burned by repeated disasters turn for stability, growth and security in the Art Market. The Art market is now controlled by Artmarket via its presence on five continents.

thierry Ehrmann, founder/CEO of Artmarket.com, the world’s leading Art Market reference, says: We knew the Art Market would be a haven, but the reality has far exceeded our most ambitious forecasts. The rush towards art has been so strong we are now receiving offers from the GAFAs almost every day… because they understand that our knowledge goes back almost three centuries, with the largest collection of scrolls, manuscripts and catalogues tracing the history of artworks in an ultra-secure bunker in a secret location. (However, the Wall Street Journal / Wired says that reliable sources, in secret collaboration with the Icelandic government, have located the bunker in a militarized zone in the middle of the volcanic island…). Our ultra-secure servers based on Artificial Intelligence hold all of the meta-data without which any investment in Art would be similar to Russian Roulette.

thierry Ehrmann concludes… “Since 1999 we have understood that the Art Market is essentially the oldest in the world… Man exchanged artworks commercially before money was ever minted… In this time of global financial and economic chaos, we are holding the key to the world’s financial salvation.

Artprice by Art Market invited social science fiction authors to write near-term finance-fiction as a prospective experiment. Naturally, because of its fictional nature, this press release cannot be interpreted in any shape or form as an element of legal, financial or economic information.