Art is magic, Cinema the magician to blur lines of reality and fantasy states Imtiaz Ali at Chandigarh University, Gharuan

Ali discusses finer nuances of filmmaking, current trends in industry, his journey in the Bollywood at the 2nd Chandigarh Music and Film Festival

CHANDIGARH, India, May 11, 2022 /PRNewswire/ — “Art transcends the boundaries of reality and fantasy and when you leave out logic in art, the magic happens,” remarked Imtiaz Ali. The renowned film director, producer, actor and writer, discussed the finer nuances of filmmaking, current trends in the cinema industry as well as his journey in the Bollywood in a candid chat at the sidelines of the second edition of Chandigarh Music and Film Festival, which commenced at Chandigarh University, Gharuan. 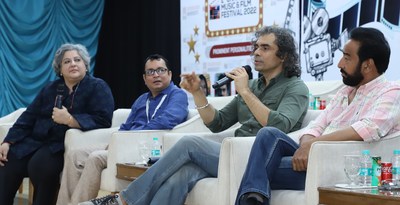 The annual two-day-long Chandigarh Music And Film Festival (CMFF) kicked off at Chandigarh University Gharuan, with renowned filmmakers and artists from Hindi film industry including Imtiyaz Ali, Saurabh Shukla, Abhishek Dudhia among others enlightened the audience with their insights into the art.

As many as 150 short films made by students of Film Schools are being screened during the Festival, which also witnessed Imtiyaz Ali’s Talk Show with senior journalist and author Kaveree Bamzai and interaction with University Institute of Film and Media Studies; giving a glimpse into finer nuances of filmmaking, current trends in the cinema industry as well as his journey in Bollywood.

Speaking on the occasion, famed actress Preeti Sapru said that Punjab deserves to prosper in a way that one should not even think of leaving this great land for another country.

“There is no Punjab without Punjabi’s. We need to preserve all the good things about our history and contribute towards their preservation,” she said, adding that efforts of Satnam Singh Sandhu towards the promotion of art and culture of Punjab were huge and would go a long way in its preservation.

In his address, S. Satnam Singh Sandhu, Chancellor, Chandigarh University, said, “Cinema is the medium of expression of ideas and thoughts. It is thus important that art in the form of cinema is preserved and promoted, and in this light, festivals like these assume greater significance. While this gathering does no justice to the stars present here, I propose that a bigger festival be organised later this year, with 50 thousand in attendance to be inspired from these personalities.”

During the special interaction session with the students of University Institute of Film and Media Studies, which was moderated by senior journalist and author Kaveree Bamzai, Ali spoke at lengths about the underlying themes in his movies, his relationship with the storyline, music and actors, besides advising the aspiring filmmakers in the audience with his wealthy experiences.

When asked to express his views about the importance of cinema in the world of art, Ali said that the boundaries of the reality and fantasy can be transcended only by the art.

“When you leave out logic in art, the magic happens. And cinema is that magician which blurs the line as it binds the audience beyond the boundaries of the reality and fantasy. Cinema is not just something you can think or express, but also something you cannot understand,” said Ali.

Asserting that some fragments of his works are related to his life, Ali also underlined that it was important to enjoy the journey, than to reach a destination. “Imtiaz of this day and Imtiaz of twenty years ago felt the same way. I am still in the middle of a journey and I am enjoying it more than ever,” he added.

Answering a student on whether he tried to ‘mock the system’ with Tamasha and whether Ranbir’s character wearing Identity Card was a ‘symbolism of slavery’, Ali said that it is our power to rationalise and think, that separates humans from animals and thus we have to think whether the system we are part of is a good one or not.

“We are sitting in Chandigarh University and here also, everyone is wearing an identity card and is administered by a system. But this system is good, it is positive and it doesn’t enslave any of us. In fact it liberates us with education. So we have to think and rationalise whether the system we are part of, is a good one, or does it require any improvements,” he elaborated.

“I am so glad that this film festival organised by Chandigarh University is enabling the opportunity to have discussions about cinema, the genres and the characters, in such detail. The viewpoints are diverse and the discussions are deep and elaborative. This is something rare and organisers deserve all the praises for putting up a great show,” said Ali.

Ali suggested the students of Chandigarh University Institute of Film and Media Studies to train as much as possible for a successful career in the industry. “Training is a life-long process. You will always be distracted by superficial things such as the looks and the body but it is important that you stay focussed on learning and growing as an actor or director,” he said.

“Not having fun is a waste of time!” - PUMA CEO Bjørn Gulden and Giorgio Chiellini Talk About Leadership

Disprz Celebrates Its Success of Having over 1.7 Million Users Employ Its Solutions Worldwide