Arctech Win Awards for Team and Tech Excellence in India 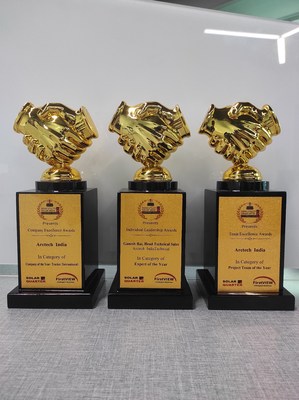 These awards have proved that Arctech has firmly held the No.1 position in the solar tracker industry in India. Arctech is the key technology partner for the biggest developers in the region, where it has a portfolio of 2432 MW across the region by the end of 2021.

“We are getting stronger as a team and will continue to strengthen our portfolio in the region!” Remarked by Gail Chen, General Manager of East Asia and India at Arctech.

The company had its debut Indian project in 2015. The company completed the delivery of its 420MW solar structure to Tamil Nadu, India, the 780MW DC project. It was followed by the 172 MWp Solar Power Plant commissioned by Renew Power in the state of Telangana, India. Now Arctech has established a solid customer foundation with International well-acclaimed partners including Adani, Renew Power, O2 Power, NTPC, Ayana, L&T, SWL, Vikram among others.

Last year, despite the pandemic disruption in India, Arctech struck a deal with one leading Indian developer to supply 1.7 GW of 1P SkyLine trackers to two projects in Rajasthan. In particular, the 860MW AEML solar power plant is the largest bifacial tracker power generation project in India.

Wood Mackenzie’s annual report shows that Arctech has maintained strong momentum in India in 2020, According to the report, Arctech topped the ranking in the Asian Pacific region with a 35% market share, aided by the unparalleled leadership in the Indian solar market. The company has maintained the number 1 tracker supplier in the region for three consecutive years.

This year, as the company launched SkyLine II, the latest offering of the famous “Sky series” tracker, the team has geared up to unleash the potential of the untapped market.

“India is like the second homebase for Arctech” Gail said. The team is celebrating its fifth anniversary and its new success of being the top Solar Tracker Supplier（cumulative shipments） in India as of June 2021 by The Market Share Leaderboard report from Mercom.

The company built its business development staff at the India office 5 years ago as it anticipated an immense growth in solar development in the country. Now the team of 30 has provided engineering and manufacturing support for Arctech’s local operation, with a possibility of acting as an extension to the headquarter in China and supporting the global business. The company also intends to source materials for its tracking systems from within the country.

Leveraging the rich experience in overtaking international projects as well as the solid understanding of local market demand, the Arctech Indian team members are capable to support clients in providing customizing solutions, installation, debugging and after-sales service, which help optimize the capability of its champion solar tracker products.

Delta Air Lines Named as the World’s Best Performing Airline of 2021; All Nippon Airways as the Most On-time Globally