NEW DELHI, Feb. 17, 2022 /PRNewswire/ — Architecture Discipline, a New Delhi-based architectural practice was honoured with a commendation in the infrastructure category from the Indian Buildings Congress for their work on Mohalla Clinics, primary healthcare facilities for The Government of Delhi. The aim of the awards is to bring much needed attention to contributions made by professionals in the field of built environment with particular emphasis on designs for public impact. 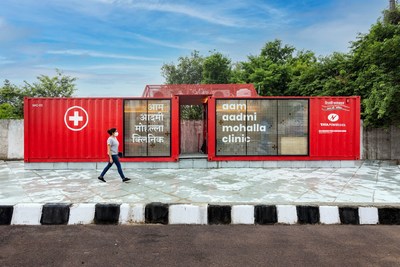 The Indian Buildings Congress, headquartered in New Delhi, was founded in 1992 by then Director General (Works) CPWD, Shri OP Goel. Today, with 130 institutional members and 6000 individual members, it is uniquely placed in the building and construction industry. Its Chief Patron is Honourable Union Minister of State for Housing and Urban Affairs Shri Hardeep Singh Puri. The Mohalla Clinics, which were developed by Architecture Discipline and set up with the support of Tata Power-DDL, use upcycled shipping containers to provide a compact, portable, and sleek primary healthcare solution for neighbourhoods in Delhi. In the first phase of deployment, two clinics have been installed in the urban settlements of Shakur Basti and Rani Bagh in Delhi. Five hundred such clinics are to be set up across Delhi in subsequent phases.

“The Mohalla Clinics aspire to provide an affordable, space-efficient, and high-quality model of healthcare to all neighbourhoods in Delhi, especially in dense residential clusters that are hard-pressed for space and have limited access to premium healthcare facilities,” said Akshat Bhatt, principal architect at Architecture Discipline. “The most distinctive feature of the Mohalla Clinics is that they use discarded shipping containers to solve an important socio-economic problem—access to primary healthcare.”

The shipping containers were salvaged from various container yards in Delhi and Haryana. Two 20-foot-long containers are joined together to form a single clinic that includes an examination room, a reception and waiting area, a pharmacy accessible from outside, and a washroom. The clinics are fully equipped to support routine health checks, testing, and medicine purchasing.

The clinics are prefabricated and also come preinstalled with electrical and lighting fixtures, essential interior finishes, and furniture. Their compact size allows them to be easily transported to various locations and to be installed with minimal on-site construction.

The interiors are oriented towards creating a hygienic and optimistic patient friendly environment, with air-conditioning and insulated walls that protect visitors from Delhi’s searing heat. Interior finishes such as the anti-microbial vinyl flooring and medical-grade stainless steel countertops are designed to be sterile and easy to maintain.

“The advantage of the modular Mohalla Clinics, built using shipping containers, is that it can be assembled in the factory, transported with ease and installed at site with minimal work. This aspect is particularly useful when the clinics need to be installed in crowded and congested areas,” said Delhi Health Minister Satyendra Jain.

Founded by Akshat Bhatt in 2007, Architecture Discipline is a multi-disciplinary architecture practice based in New Delhi, India. The practice’s notable projects include Mana (Ranakpur, 2013), the Discovery Centre (Bengaluru, 2014), and the India Pavilion at Hannover Messe (Hanover, 2015). The firm’s work has been critically acclaimed in India: multiple Indian Institute of Interior Designers (IIID) Awards, an NDTV DAA Architect of the Year Award (2013); citations from Alliance Francaise (2012), Architectural Digest India (2015), and the National Gallery of Modern Art (2015); and a felicitation by the Government of India (2015). Notable ongoing projects include the refurbishment of the 19th-century edifice of The Oberoi Grand, Kolkata, a series of new modular, urban hotels for the hospitality group; and JDH, an urban regeneration project that aims to restore the old, walled city of Jodhpur, India, to its former glory.