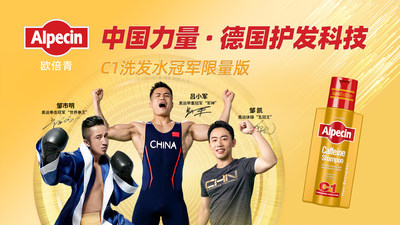 Alpecin has always formed great partnerships with major sports. From the sponsorship of European FENIX cycling team competing in the Tour de France, to the collaboration with United States Professional Basketball League (NBA), the Chinese Football Association Super League and other super level live sport events broadcasted in the Chinese mainland market and all around the world, sport is part of Alpecin’s brand DNA.

In order to celebrate the great success of the three Chinese Olympic champions and to show respect, Alpecin introduces a special “Champion Limited Edition” – C1 Caffeine Shampoo – Gold Edition. Combining the best of both worlds, “China Power” and “German Engineering for your hair”, Alpecin is proud to present this special edition to its Chinese customers.