After the fall: Real estate in the aftermath of the COVID-19 crisis

– In the initial three months of its episode, it halted the construction activities and fundamentally disintegrated the market

– Amid this situation, however, leading real estate developers like T&T Group have adopted unprecedented strategies to cope with the “new normal” of real estate

GHAZIABAD, India, Oct. 10, 2020 /PRNewswire/ — All across the globe, the year 2020 surfaced to a screeching halt as the COVID-19 pandemic disrupted different verticals of the world. The business sectors and markets globally have been severely impacted, witnessing a low record with a negative outlook. Similarly, in India, the pandemic outbreak has left a great deal of uncertainty. With GDP diving into negative figures, the nation is by all accounts confronting one of its most exceedingly terrible economic recession. It has also affected the real estate sector, which was on a development direction or growth trajectory over the past few years. The significant business bestowing to the national economy slowed down as 1.3 billion people quarantined themselves since 21st March 2020. 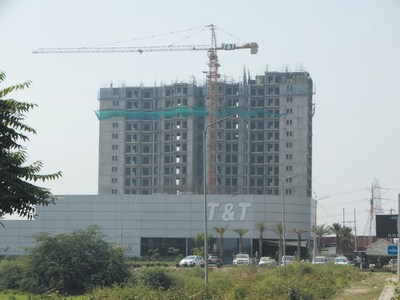 The government restricted the movement and production as an attempt to forestall the spread of the COVID-19 pandemic. The lockdown totally slowed down activities in April and the vast majority of May. As per the reports shared by Knight Frank’s India real estate H12020, Delhi-NCR saw a 6% Y-o-Y devaluation in weighted normal costs during the months of January-June 2020 to Rs 4,145 for every sq ft, which is calculated as the lowest over the recent years. However, quite surprisingly, developers like T&T Group stood apart among peers in the quarter finished in June even as volumes declined after the COVID-19 lockdown slowed down all activities.

The Group in this scenario not only performed proficiently in spite of challenges but also is anticipating further improvement with its distribution capacity network and brand value. Their adeptness and shrewd business acumen also helped them to retain their existing consumer base as well as expand their sales, especially when other businesses suffered insurmountable losses. The organization foresees that its revenue will expand further in the progressing fiscal year.  Additionally, higher proficiency during the quarter exhibits better-than-anticipated operational execution.

As per Ankush Tyagi, CEO, T&T Group, the organization outperformed during the pandemic with its sustainable plan-of-action and thus were able to safeguard and preserve the client base, which, Tyagi holds, was only possible because of the carefully carved out strategies by the management of the Group, including:

Focus on timely delivery: Keeping in mind their foremost goal of timely delivery, the Group ensured that the construction was carried out expeditiously even during the pandemic, which is why they are assured of not getting locked in project delivery.

Financial discipline: The Company also improvised effectively in its variable and fixed costs, as well as those related to interest and production.

No over expansion: The Company is rightly not concentrating to expand and formulate any new plans, except for the ones that are already in progress, so as to deliver the ongoing projects on time as well as with the promised quality.

Employee satisfaction and enhanced cooperation: The Company puts its sincere faith in its workforce and their cooperative efforts. Accordingly, with its focus on timely deliverance and driving sales, it also made sure to not compromise on employee satisfaction by adopting a “zero-payroll-deduction” policy.

Further discussing their future prospects, Tyagi stated, “We are overwhelmed and inspired by the success of T-Homes, Indian real estate’s first-ever venture into digital living. In line with the same vision of digitalizing Indian homes, we are now looking forward to one-up ourselves by introducing A. I. (Artificial Intelligence)-powered homes with our next project, set to be unveiled by the end of this month.”

T&T group contemplates to change the landscape of the homes to usher India into the futuristic era. It has already started with the T homes, and the next project will strive to better that on several fronts. It will leverage the win-win combination of Artificial Intelligence (AI) and the Internet of Things (IoT) and propel the living experience to a whole new level.

Tata Crucible Corporate Quiz, in an all new online format