LONDON, Oct. 5, 2021 /PRNewswire/ — Just ahead of today’s highly-anticipated group stage kickoff, adidas has been announced as the exclusive global sponsor of UEFA Women’s Champions League coverage for sports streaming platform and global broadcaster DAZN as well as partner YouTube. This marks the first global sponsorship of the landmark multi-year broadcast partnership between UEFA, DAZN and YouTube and will exclusively span all 61 live matches from Matchday 1 through to the finals in May. 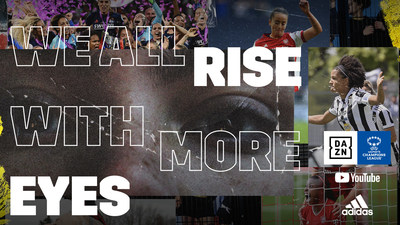 With fans for the first time finally able to follow the entire season of the UEFA Women’s Champions League, all around the world, in one single place – on DAZN and/or free globally on DAZN’s new YouTube channel – the competition is on the brink of unprecedented growth. Building on this long overdue global exposure, adidas will help it reach even more mainstream audiences.

The agreement with adidas makes the brand DAZN’s largest global sponsor in history. The deal includes sponsorship advertising in all 61 live matches, as well as related highlights and clips. It also includes adidas integration within DAZN’s new “We All Rise” six-part city series, which will premiere at halftime of all matches during each week of the group stages and shine a light on the rich local history and rise of women’s football. Over the course of the season, this will evolve to include deeper collaboration and co-creation between DAZN and adidas. Meanwhile, the advertising agreement between adidas and YouTube includes pre-roll globally across all live matches and non-live content across the DAZN UEFA Women’s Champions League YouTube channel.

Nick Craggs, General Manager, adidas Football: “The UEFA Women’s Champions League is the pinnacle club competition and this new partnership will take it to more fans than ever before. At adidas, we believe that through sport we have the power to change lives. More visibility, more coverage and innovative formats are another step in the rise of women’s football and we’re excited to come together with DAZN and YouTube to drive the game forward.”

James Rushton, Co-CEO of DAZN Group: “We are thrilled to officially announce adidas as a global sponsor of DAZN and our UEFA Women’s Champions League coverage. This makes adidas our biggest global brand sponsor ever to date and is a testament to the tremendous commercialization and unrivaled brand partnership opportunities that exist around women’s football, especially at this most elite level. We look forward to working with adidas to further elevate the competition by reaching new and more fans as well as continuing to build upon the ever-growing economical ecosystem of the women’s game.”

Nancy Elder, Chief Communications Officer of DAZN Group: “When we announced this landmark deal a few months ago, we simultaneously unveiled a short film titled ‘We ALL Rise With More Eyes’ – which conveys DAZN’s unwavering belief in the ripple effect more visibility will have on taking the women’s competition to new heights. With adidas on board as this season’s global sponsor, the powerful and virtuous cycle of growth is well in motion and we look forward to more eyes on the game leading to much, much more – more likes, more fans, more sponsors, more players turned into household names, and more of the next generation inspired to play and pursue their dreams.”

Ben McOwen Wilson, Managing Director of YouTube [UK & Ireland]: “YouTube is delighted to have adidas come on board as a global sponsor of the UEFA Women’s Champions League live coverage on DAZN’s YouTube channel that will be free to view for fans around the world starting today! This is a landmark deal, representing one of the largest ever investments in women’s football content, and is a massive signal of the value and appeal of the women’s game to fans.”

Marianne Stroehmann, Senior Industry Director of Google: “This is a major moment for women’s football with a first-of-its-kind sponsorship that will allow adidas to reach and engage global fans of the UEFA Women’s Champions League on YouTube. We know that there is a direct link between financial investment and breaking the visibility gap for women’s football. Thanks to adidas, with the support of great partners like Mediacom, we have taken another step towards full equality for the women’s game.”

About adidas in Football

adidas is the global leader in football. It is the official supplier of the most important football tournaments in the world, such as the FIFA World Cup™, the UEFA European Championship and the UEFA Champions League. adidas also sponsors some of the world’s top clubs including Real Madrid, Manchester United, Arsenal, FC Bayern Munich and Juventus. adidas is also partner to some of the best athletes in the game including Leo Messi, Paul Pogba, Mohamed Salah, Paulo Dybala, Vivianne Miedema, Lindsey Horan and Wendie Renard.

DAZN Group is one of the fastest growing sports media companies in the world. Headquartered in the UK and with employees in over 25 countries, our businesses touch every aspect of the way fans engage with sports; from production, through to content distribution and commercialization. DAZN Group is home to DAZN, the leading global sports streaming platform, DAZN News, the popular sports portal and DAZN Player, the proprietary sports VOD platform for publishers. DAZN is leading the charge to give sports fans around the world access to sport anytime, anywhere. DAZN guarantees affordable access on connected devices including smart TVs, set-top boxes, streaming sticks, smartphones, tablets, PCs and game consoles. DAZN is now live in more than 200 countries and territories. Visit www.dazngroup.com for more information.

Launched in May 2005, YouTube’s mission is to give everyone a voice and show them the world. We believe that everyone deserves to have a voice, and that the world is a better place when we listen, share and build community through our stories. YouTube is a Google company.