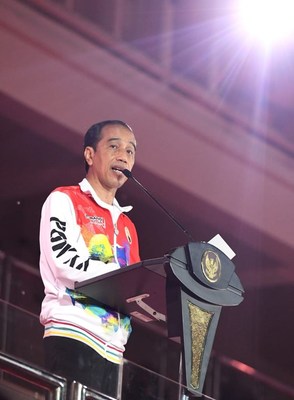 For the first time in history, the 20th PON was hosted in the Papua province, starting from October 2-15, 2021. Amidst geographical challenges, the national sport event has driven the momentum to spotlight Papua’s immense potential and strength, as well as sending a positive, unifying message across the country.

The success of PON has also illustrated the advancement of Papua, the readiness of infrastructure, and the preparedness of its community in organizing international and national-standard sports competitions.

Papua’s excellence is reflected in multiple international-standard infrastructures. Various sports arenas, including an aquatic arena, a cricket venue, an indoor and outdoor hockey field, and a shooting range were built across PON’s venues in Papua’s capital Jayapura city and three other regencies — Jayapura, Merauke, and Mimika.

PON’s main venue, the Lukas Enembe stadium, where the games’ opening ceremony was also hosted, spans 13 hectares and can accommodate over 40,000 spectators, making it one of the best sports stadiums in Asia Pacific.

Amidst health and security concerns

The local committee from Papua has proven to be successful in hosting sports events amidst covid-19 concerns. Held after a year’s delay due to the pandemic, the government has taken measures to put strict health protocols in place, including ramping up vaccinations and limiting the number of people who can enter the sports arenas. This measure has positively contributed to the surge of vaccination rate up in Papua, with some regions recorded as over 50% of people are vaccinated.

“Maintaining health and safety measures during the event is our top priority. We have required all stakeholders involved in the event, including athletes, committees, officials, and all audiences, to complete their two doses of covid-19 vaccines before attending the event,” said The Minister of Communication and Informatics Johnny G. Plate.

The event was completed efficiently without any security incidents, highlighting the region’s conduciveness as well as the unity and enthusiasm of the local public in supporting the event.

This year’s PON managed to bring together over 258 MSMEs from local communities in Jayapura to participate in the events through culinary and handicraft markets around the sports arenas.

Transactions at the PON’s MSMEs markets reportedly reached IDR82 million per day and were expected to close at IDR1 billion cumulatively by the end of the sports festival.

During PON, the government also worked to encourage tourism in the area, through the launch of Papua Tourism app to introduce and promote tourism objects in all four clusters of PON. This includes nature tourism, cultural tourism, and historical tourism. The app also acts as a platform for MSMEs to sell their products online.

As the nationwide sports event concluded, Papua province is now even more ready to welcome more visitors, to enjoy the beauty of the home of Cenderawasih, the birds of paradise.