XI’AN, China, Sept. 17, 2019 /PRNewswire/ — Under the theme ‘The Belt and Road Construction: High-Level Cooperation and High-Quality Development’, The 2019 Euro-Asia Economic Forum (The Forum) held in Xi’an, the capital of western China’s Shaanxi province, has gathered member states of Shanghai Cooperation Organization (SCO) to promote the mutual understanding between Asian and European countries as well as to discover the cooperation and development opportunities under the Belt and Road Initiative (BRI). The forum was also joined by representatives from 58 countries, international organizations and financial institutions. 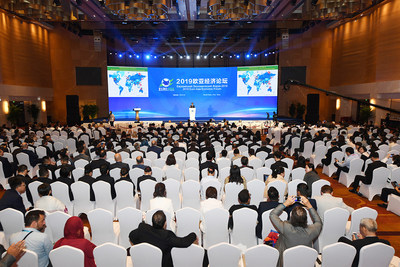 The Forum has integrated talent resources, logistics capital and information to co-establish the BRI with an upgraded SCO cooperation by accelerating the collaboration of the eastern and western regions in Eurasia. It sees this as a significant step between China and Eurasian countries to stabilize the world economy in many areas such as artificial intelligence and agricultural high-tech implementation.

“The BRI has made Shaanxi a frontier of China’s further opening up and has connecting Shaanxi with SCO members and Eurasian countries,” said Hu Heping, Secretary of Shaanxi CPC Provincial Committee. “Moving forward, Xi’an will take this opportunity to strengthen its exchange with partner countries in energy, advanced manufacturing, trade and investment, ecology and tourism, green infrastructure, logistics and many other areas.”

Aiming to strengthen national and international cooperation, uniting aspirations on creating single and common principles of development, the forum consists of 10 satellite events that cover finance, ecology, culture and tourism, meteorology as well as science and technology. The core dialogues of the Forum were highlighted by foreign exchanges in, economics and trade, industrial cooperation and public services.

Launched in 2005, the Euro-Asia Economic Forum is held every two years. Now in its eighth session, the Forum has shaped a crucial platform for China and Eurasian countries to jointly establish the BRI by promoting more than 70 cross-border cooperation intentions such as the energy club, urban development fund and multinational digital library.

Xi’an, following the initiatives of the Forum, will play its central role in western China’s economy and foreign exchanges in science and technology along the Silk Road, cultural promotion, opening-up model and transportation. As one of the experimental zones in China, Xi’an has furthered its strategic position and is strived to bring vitality in lifestyle, employment and humanity.

The capital of western China’s Shaanxi province, Xi’an is an international tourist destination with over 3,000 years of history and world-renowned attractions such as the Terracotta Warriors and Horses and its ancient City Wall. The city, dubbed “China’s outdoor museum,” was the starting point of the Silk Road, an ancient network of trade routes established during China’s Han Dynasty that linked the East and the West in commerce.