54% of farmers support the government’s farm bills while 46% oppose them, according to Krishify’s survey

– Support for farm bills differs from state to state, highest in Maharashtra and lowest in Punjab

– The survey was conducted between 12th March to 17th March on the Krishify app which has more than 3 million downloads predominantly in Northern, Central, and Western India.

GURUGRAM, India, April 1, 2021 /PRNewswire/ — In a week-long survey conducted on Krishify, one of the most actively used apps by Indian farmers, a fractured verdict has emerged for the farm laws government’s controversial farm laws. The survey was conducted between 12th March to 17th March capturing inputs of about 80,000 farmers from 12 states including Punjab, Haryana, Uttar Pradesh, Delhi, Rajasthan, Himachal Pradesh, Madhya Pradesh, Chattisgarh, Bihar, Maharashtra, Gujarat, and West Bengal. 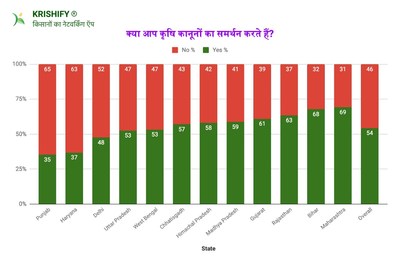 The Krishify app provides information, updates, news, and networking opportunities to more than 3 million farmers across the country. The survey asked users of the app just one question – whether they support the Modi government’s three farm laws or not and sought their input with just a click of the button in Yes, or No. The responses received from the respondents are as follows:

On this occasion, Rajesh Ranjan – Founder and CEO, Krishify, said – “As the protests against the three laws cross 100 days, the results from Krishify survey could be seen as a barometer of the success or failure of these protests. Barring Punjab, and Haryana, the majority of farmers from 10 out of the 12 states covered in the survey support the laws, however, the support could be labelled ‘overwhelming’ only in Maharashtra, Bihar, Gujarat, and Rajasthan. However, since the survey was conducted only on a smartphone app, the results don’t reflect the sentiments of farmers who either aren’t digitally connected or don’t use smartphones.”

Due to relatively lesser number of users in states where Hindi is not the primary language of communication for farmers, we could reflect the opinion of only 12 major states in the country. In the next few days, we will try to educate our users about the pros and cons of the bills so that they could make a more informed opinion about the bills.

Krishify is a professional network of farmers and other stakeholders in the agricultural ecosystem. The app is most popular among farmers from Uttar Pradesh, MP, Rajasthan, Bihar & Maharashtra. Farmers use this app to connect with each other and share knowledge or discuss issues related to farming & animal husbandry.