Exhibitors are continuously innovating their business outreach approach since Canton Fair first moved on cloud for its 127th session. This year, many exhibitors have introduced creativity to their live broadcasts.

To reach markets at home and abroad, Guangzhou Chemicals redecorated their showrooms and introduced a green screen effect to its livestream rooms so that products can be seen in the scenarios that applies to the target market. The company’s 30 live broadcasts are also open to buyers in different languages.

The new platform for doing business in the cloud, as a creative approach launched by Canton Fair, has enabled companies to further explore markets and opportunities. Huo Liyi, general manager of Golden Chef Machinery Co., Ltd. a food machinery manufacturer specializing in commercial food machinery and baking equipment, has been participating in the Canton Fair since 2006. The company also adapted to the digital age by joining the Canton Fair on cloud from the 127th session.

Recalling her first experience to join the Fair online, Huo told the story with Martha Soto, a Peruvian buyer. “We had interacted with Martha face-to-face at the offline Canton Fair, but he did not place an order at that time.” Without physical exhibition halls, Huo was afraid that although Martha had seen all products by visiting online showrooms, he may still question whether the company could produce the equipment in time during the epidemic. To allay Martha’s worries, Huo immediately arranged the online tour to show the factory ‘s production line, and finally succeeded in getting the order. 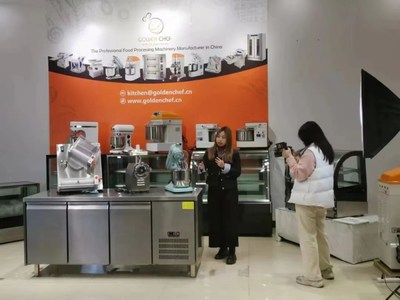 This year, Golden Chef started its first livestream on the opening day of the 131st session. With more than 42,000 likes within 2 hours, the livestream ranked number seven in the machinery sector. Huo is very excited by the increasing opportunities brought through the livestreams. The company has received sourcing intentions from buyers from countries such as Mexico, Chile, India, Russia, Colombia, Spain and Germany.

“Thanks to the increasing development of Canton Fair’s platform, we are well prepared to embrace these opportunities,” said Huo.

17-Year-Old Creates Platform to Support 100,000 Plus Women Affected by the Pandemic