Centuries of wisdom turns out be wrong — Men, not women, are the weaker s_x.

The novel coronavirus seems to attack with a bias. In couples, a coronavirus COVID-19 infection is more likely to kill the husbands than wives. The pattern is noted across countries – 70 percent who died in Italy were men, and similarly, in New York 62 percent of the dead are men. In South Korea, more women have been infected but the dead are mostly men.

Highlights! Wives have a better chance of surviving a coronavirus infection than husbands… Genetically speaking

The pattern has startled scientists and medical researchers globally, and while many initially pointed to probable reasons like higher male smoking rates and that men neglect hygiene, the truth to this supposed super-resilience of women lies in genetics. 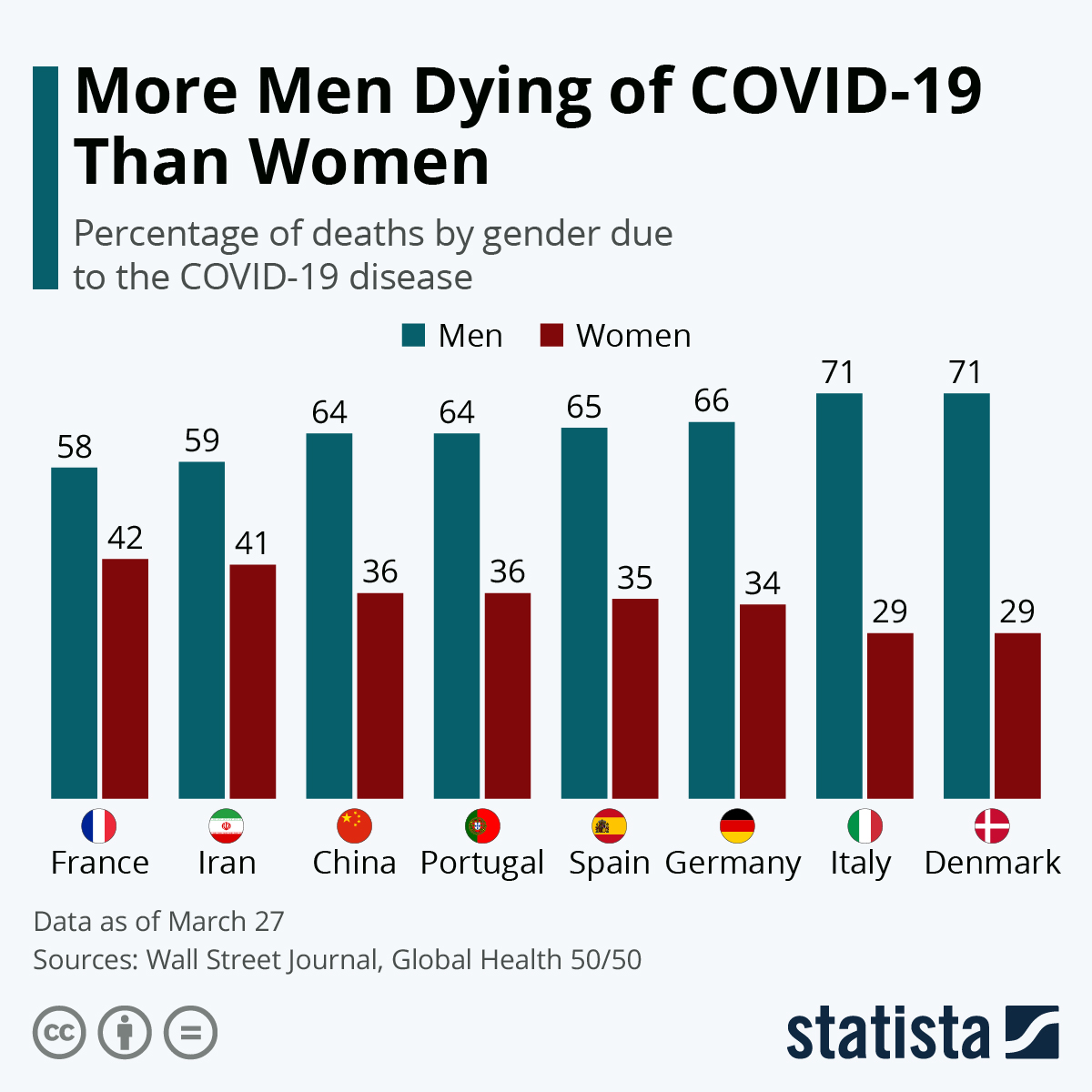 Across age groups, females are observed to have greater resilience. They are better at keeping infections at bay and better at recovery from diseases and injuries. Women also live longer – 95 percent of supercentenarians (humans who live longer than 110) are women. Similarly, a baby girl is more likely to make it to her first birthday compared to a baby boy.

Women live longer – 95 percent of supercentenarians (humans who live longer than 110) are women.

As per Harvard Health, 57 percent of 65+ are women and 67 percent when looking at those 85+ years of age. On average, women tend to live 7 years longer than their male counterparts globally. Scientists note that a female’s immune system outperforms that of a male throughout our lives. As per genetic researchers, this resilience or ability to survive is directly linked to having more X chromosomes in your DNA.

It’s all about Chromosomes

It is perhaps common knowledge that humans, both males and females, have a set of 46 chromosomes (23 pairs) in their cells. One of these 23 pairs determine our biological s—x. While a boy gets X from the mother and Y from the father, a girl gets Xs from both. While the Y chromosome, with only 70 genes, is responsible for the male reproductive system, it is the X chromosome, with 1000 genes, that creates critical human organs and systems like the brain and the immune system.

Females have a better defense system at the cellular level due to having more X chromosomes. In our systems, genes on the X chromosome are the ones responsible for recognizing a virus. That’s significant for the immune system to respond appropriately. As genetic researcher Sharon Moalem explains, “Right away, women have two different populations of immune cells that are best at spotting invaders.”

Females have a better defense system at the cellular level due to having two types of X chromosomes.

On the contrary, with a single X chromosome, males have a lesser agile immune system when it comes to identifying and fighting an infection. For males, the single X has to recognize the virus and can fight it too.

More so in the case of COVID-19

The COVID-19 virus directly attacks the single-X vulnerability of males. Researchers are seeing that as the coronavirus enters the lungs, it uses a spike protein as a key to break into our lung cells. The lock it breaks is an enzyme attached to the cell membrane’s outer surface called ACE2.

Now, the gene making ACE2 is found on the X chromosome. Now this gives women an inherent advantage in comparison to their male counterparts. The COVID-19 virus needs only one right key to infect all the lung cells of a male. However, in the case of a female who has two different sets of X-chromosomes, the virus is likely to be limited in the number of cells it infects.

This action of the virus damages the ACE2, which loses its ability to perform the other core function – prevent fluid build-up in the lungs during an infection. Lungs filling up and causing pneumonia is the number one cause of deaths from COVID-19.

So, in infected couples, wives have a better chance of survival than the husbands due to the two different X chromosomes being able to fight the coronavirus.

Genetic researcher Sharon Moalem calls this super immunity of females as the “Law of Homogameity” i.e. having the same gene. In essence, it means that the two of the same chromosomes give a genetic advantage in terms of immunity. Furthermore, this is as true in the case of animals as is in humans.

In the animal kingdom

Chimpanzees – Female chimps reach ages of around 39, while males live for around 32 years

Birds — Quite the Opposite but not an anomaly

Male birds live longer than females but that’s because it is the males that have the same sets of chromosomes in avians (ZZ compared to XX in mammals).

What Does Stay At Home Mean For 150 Million Homeless?

Beyond A Dystopian Reality: The World After Coronavirus Pandemic — Will You Survive?

Ever Wondered What Happens If The Queen Dies During The Pandemic