If at all, we agree that men are messing it up?

The world is witnessing major crises unfold. From COVID-19 led pandemic to the outbreak of the Russia-Ukraine war, it appears that the civilisation is failing. And at the helm of all these crises are the global leaders — old, overworked, combative and all men.

Enters the need to shift focus to female leadership!

Since 1960, only 63 countries have appointed women to hold the highest executive office to run the nation. 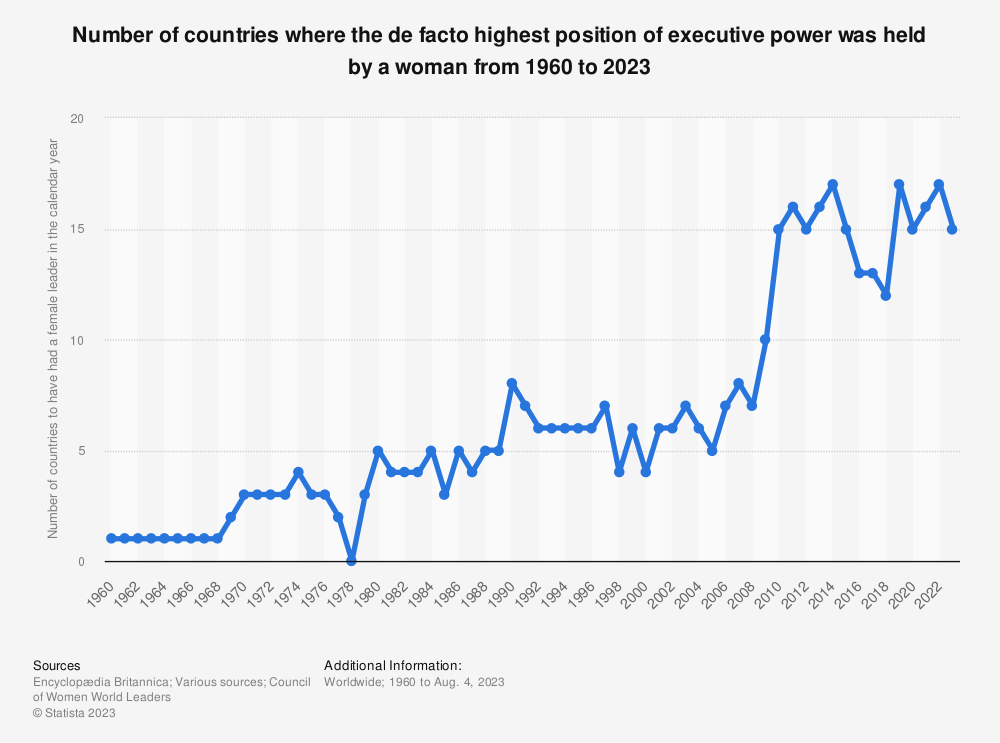 As we watch a series of unfortunate events unfold, there are only 15 female leaders in 2022 who hold the highest de facto position of national executive power. But surprisingly, these nations have done relatively better during the global state of alarm.

There is no perfect fit when you’re looking for the next big thing to do. You have to take opportunities and make an opportunity fit for you, rather than the other way around. The ability to learn is the most important quality a leader can have.

In a recent interview with CNBC, COO of Meta Sheryl Sandberg commented on the Ukraine and Russia war: No two countries run by women would ever go to war. And scientifically, Sandberg’s statement is not an exaggeration.

Video: Meta’s Sheryl Sandberg: Social media is bad for dictators, that’s why Putin took us down

Women are psychologically functioned to be compassionate and collaborative leaders rather than argumentative and aggressive. We have plenty of living examples before us to prove the fact- from New Zealand’s Jacinda Adern to Finland’s Sanna Marin.

The strength of a society is measured not by the wealth of its most affluent members, but by how well its most vulnerable citizens are able to cope. The question we need to ask is whether everyone has the chance to lead a life of dignity

And female leadership becomes even more essential when a company or a nation is undergoing a catastrophic state. There is even a term for it — glass cliff.

Every time an organization or a company is going through its worst time possible, a female leader is given the baton of leadership to save it. By now, this concept must have stirred your curiosity — what makes female leadership so indispensable during the state of utmost failure? Let us try to answer the questions.

According to research by HBR, the traits that people look for in a leader during challenging times are inspiration, motivation, good communication, collaboration, and relationship-building.

The study further revealed that female governors in the U.S. were more expressive, sensitive, nurturing and confident during a state of fear.

Female leaders are better communicators and good at adapting and learning. This is scientifically true as the part of the brain responsible for the understanding and processing of language, planum temporale, is more developed in females than men.

More From DKODING: The World’s 10 Most Powerful Business Women (CXOs) And What Makes Them Great

Why world need more female leadership — not just during crisis but also during peace.

Since time immemorial, the world has been run by men. The society we live in has been structured to function in a rigid form of power dynamic where the more tough, unforgiving and violent, the better the leader. As a consequence, the majority of global leaders have fixated on wars, conflicts and division to assert supremacy.

However, this certainly cannot be the right way to go ahead. It never was.

Studies reveal that the major global events that were handled with mass destruction and loss of human lives could have been averted through compassionate and collaborative leadership.

Popular On DKODING: The World’s 5 Most Powerful White-Collared Women In 2020

Video: The Story of Jacinda Ardern, PM of New Zealand

Ardern’s style of leadership is rooted in kindness, the sort of leader who actually cares for her people. She indulged in open communication during the COVID19 crisis and understands all forms of equality and not just selective — from women empowerment to LGBTQ rights.

Ardern and her administration directly practised solidarity with people during a crisis. When the pandemic hit its peak in 2020, New Zealand’s PM and her staff took a 20% pay cut alongside fixing the unforeseen challenge.

She is also highly adaptive and agile to the new situations that unfold- be it mass shooting at Christchurch 2019, or COVID outbreak where she quickly imposed lockdown in mere 100 cases. The move listed NZ among the very few nations that were highly effective in handling the COVID-19 outbreak successfully.

Adding to the list of good leadership traits, Jacinda Ardern also proved how female leaders are multitaskers. During her pregnancy, she worked from the office for the majority period of maternity. Even during the postpartum stage, she didn’t shy away from carrying her three-month-old daughter to the office. She even accompanied her child to the UN General Assembly.

I want to be a good leader, not a good lady leader. I don’t want to be known simply as the woman who gave birth.

Also Read: The Richest Woman In The World Right Now And The Top 10

Toughness, assertiveness and a bold quotient are undoubtedly essential for effective leadership. However, female leaders worldwide are reinforcing how a good leader sets these conditions on the table. It is absolutely possible to be kind and yet assertive, compassionate yet tough and collaborative yet set boundaries.

And during the turbulent times that we live in, being empathetic while showing the direction to the society is the only way to make the civilization sustain.

Now That the World is Falling Apart, Can Female Leadership Save Us? Please do leave your views and thoughts in the comment section.

The 10 Powerful Women In Crypto That Are Killing It