Latest reports suggest India’s Oxygen crisis will show signs of easing only by mid-May: That means the horror show may continue unabated for at least 10 more days.

India’s lethal second wave and an acute shortage in the supply of medical oxygen have brought the country to its knees in its fight against Coronavirus. The explosion of COVID-19 cases, and the heartbreaking pictures of patients desperately queuing up for hospital beds, while relatives run around trying to arrange oxygen cylinders and medicines, and hospitals sending out SOS’s for oxygen supplies on social media. A number of Delhi hospitals with no significant oxygen production capacity, even resorted to making frantic public calls last week seeking emergency supply.

Watch: India’s oxygen crisis: a barrier in its fight against the ‘grim reaper’- Covid-19

Why is India struggling to breathe?

Hospitals continue to blame the Delhi government for not sending them oxygen supply right in time. In turn, the state government continues to blame the Centre for not looking into the delayed shipments.

Even as a more ferocious wave of Covid-19 continues to grip India and the graph of infections that begun to soar vertically, breaching a global record on April 26 with 350,000 new cases. In comparison with 96,424 new cases on September 16 last year.

There are thousands of critically ill patients with a virulently invasive SARS-CoV2 virus blotting out their lungs. Now, they are pouring into hospitals across all 12 of the most seriously affected states.

By late April, the demand for medical oxygen witnessed a 10-fold spike, straight from 700 metric tonnes per day (MTD) to over 6,000 MTD. 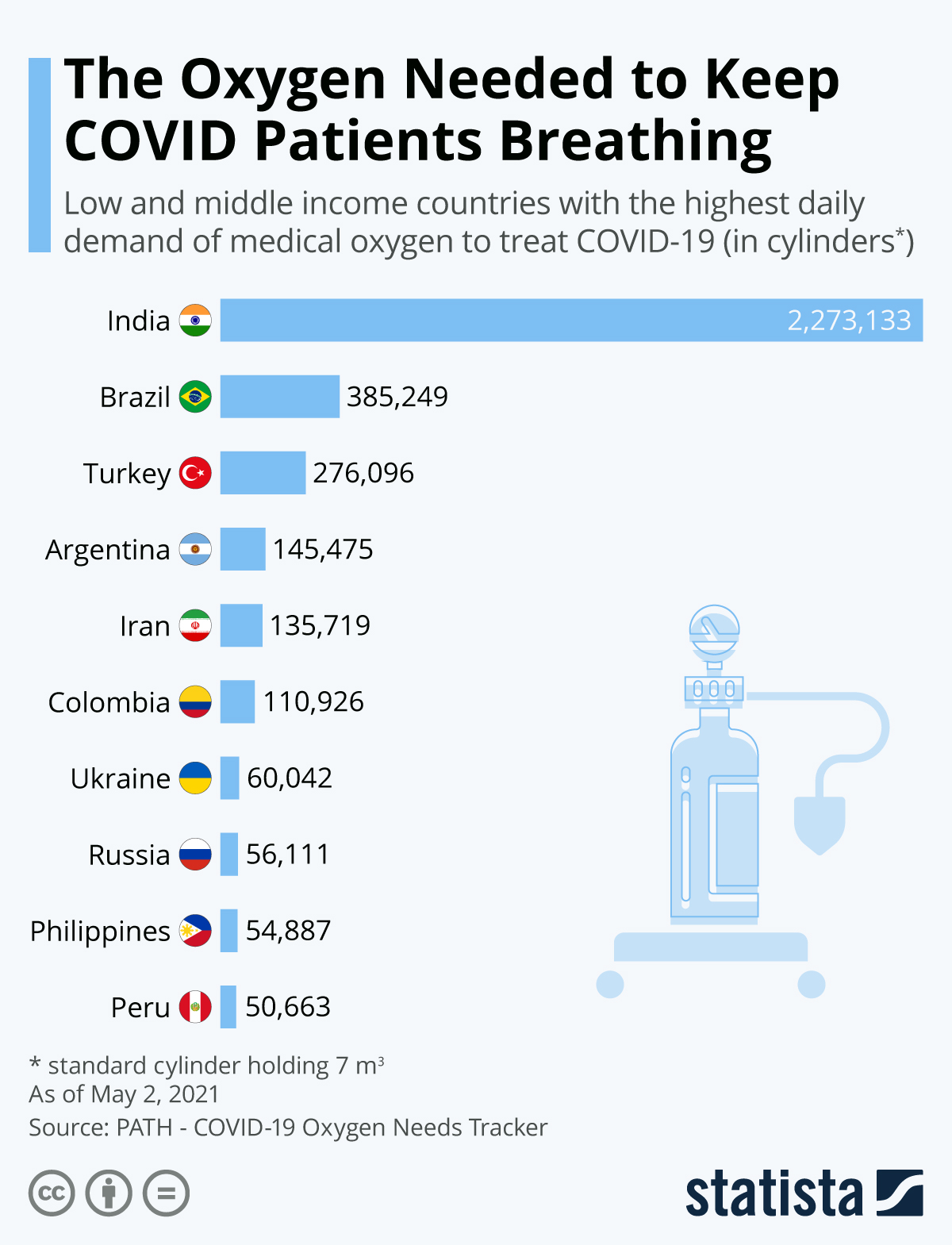 At 2,272,133 cylinders, India’s medical oxygen demand is nearly twice the combined need of next 9 worst-hit low and mid-income countries at 1,274,628 cylinders.

The country’s creaky medical infrastructure started to give way under the burden of new cases. Hospitals across India began to register more alarming dips in medical oxygen, and that too in quick succession.

By mid-April, Gujarat recorded a shortfall of 350 MTD; and at least 20 people had reportedly died due to lack of oxygen in districts such as Rajkot, Mehsana, Navsari, Surendranagar, and Banaskantha. Even an industrial powerhouse like Maharashtra, whose oxygen plants produce 1,250 MTD of medical oxygen, was desperate in a time like this and dialed Gujarat, Jharkhand, Chhattisgarh, Andhra Pradesh for help.

Even in Uttar Pradesh’s capital city of Lucknow, the demand spiked from 2,000 cylinders per day to 7,000.

However, New Delhi seems to be the worst affected so far. With the national capital recording 24,149 new cases and 381 deaths on April 27. The state had to rely on tankers from Himachal Pradesh, Uttar Pradesh, and Rajasthan for medical oxygen with no oxygen-producing plants of its own.

By late April, Delhi needed a total of over 700 MTD of medical oxygen supply but only got a hold of 480 MTD. The city saw a repeat of the Jaipur Golden Hospital tragedy, with hospitals posts frantic social media calls and appeals as their stocks dipped to a dangerous level and staff asking patients’ families to arrange for cylinders on their own.

The Black marketers had a sense of this opportunity, and in order to make a quick buck, the market hoarded scarce cylinders and even hawked jumbo ones for Rs. 64,000 each.

The police raided Dashrathpuri in southwestern Delhi and seized 32 cylinders from a black marketer’s residence. He was decanting them into smaller cylinders and then selling them for Rs. 12,500 each. 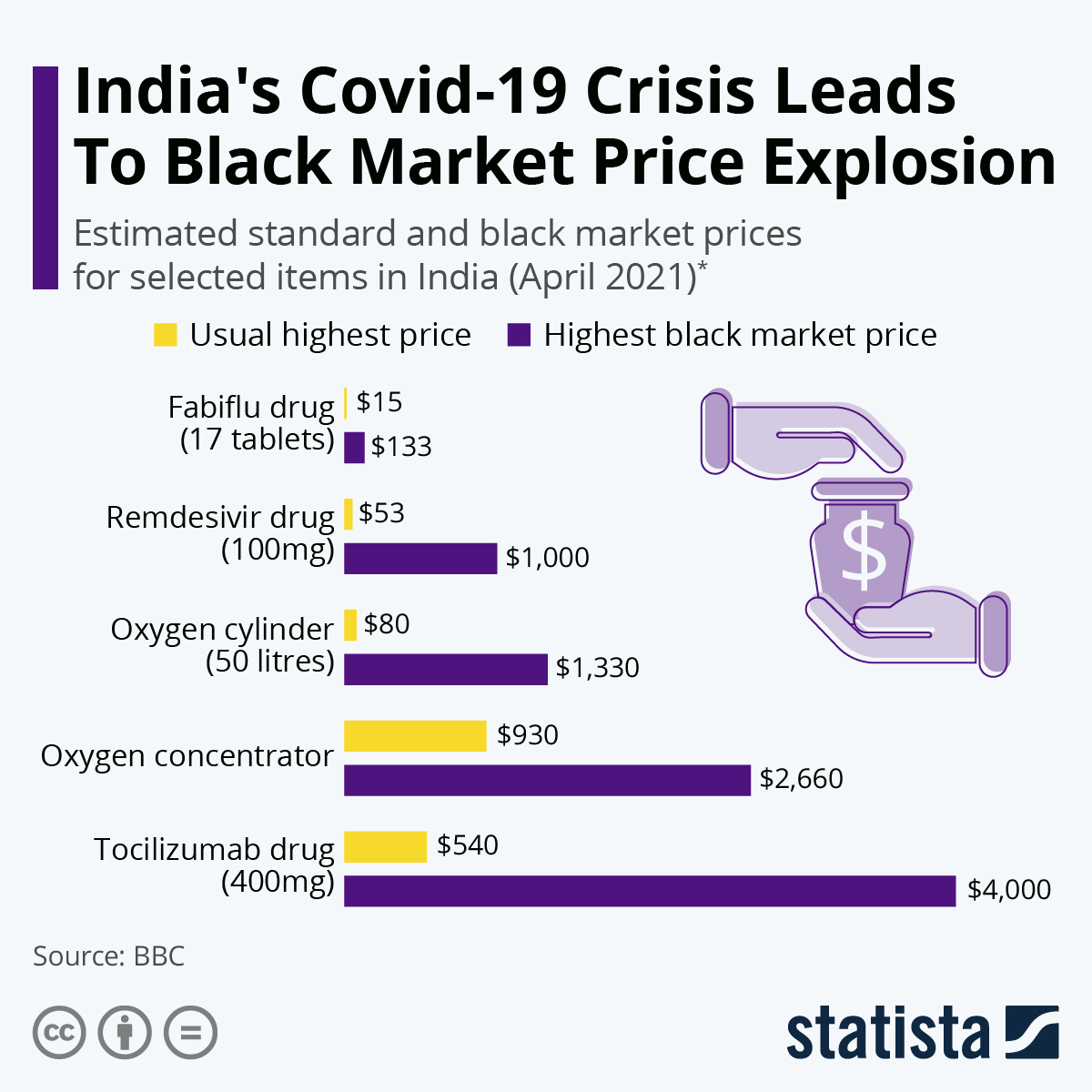 In many places across the country, the oxygen supply chain broke down fully. Even patients died due to leakages and low pressure. It spiralled into such a grave situation that it was only left to the volunteers and civil society to provide leads on cylinders and ICU beds when desperate families took to social media for help.

The slow-paced government bureaucracy only woke up when the crisis had exploded in their faces. But, only to realised it would be days before additional supplies from India’s eastern industrial centres could possibly reach out to the worst affected states.

The Union government projected shortfalls in-store in six worst-hit states by April 30 in an affidavit before the Supreme Court on April 27.

In fact, Uttar Pradesh, with a demand-supply gap of 400 tonnes, was likely to be the worst hit. The Hindon-based C-17 Globemasters, from the IAF’s strategic airlift squadron, flew empty trucks to oxygen factories in eastern India to speed up the movement of oxygen trucks.

Meanwhile, India’s foreign ministry also sent out SOS-es to other countries seeking medical help, such as cylinders, cryogenic oxygen tanks, and oxygen concentrators. But, it was too late for the grieving relatives by then.

The Centre failed to anticipate the impact a massive surge in oxygen demand would have on its distribution infrastructure. India has only 1,700 tankers to ship liquid oxygen, whereas the increased demand would double this fleet size. The sheer distances a truck would have to cover across the breadth of India, ferrying additional liquid oxygen from the production hubs in the east to the consumption points in the west, meant each truck would be out of action for close to a week. Cryogenic ISO containers, 20-feet-long cylindrical tanks that store oxygen, were also in short supply and had to be improvised. Maharashtra dispatched trucks onboard rail cars customarily used to transport military armoured vehicles to fetch gas from Vizag. The increase in the supply of medical oxygen cylinders during the lockdown, from 500,000 pre-Covid to around 1.3 million in the past year, proved insufficient as cases continued to mount.

Most states, too, were caught napping by the crisis. Gujarat, for instance, did not set up a single oxygen generation plant in the past year, assuming existing production was enough to meet any requirement. Rajasthan needs a minimum of 30 tankers, compared to the existing 14 in order to transport oxygen from the plants to hospitals.

According to a Reuters report, India’s severe medical oxygen supply crisis is expected to ease by mid-May, with output rising by 25 per cent. Also, transport infrastructure will be ready to cope with a surge in demand caused by a dramatic rise in coronavirus cases. This month, dozens of hospitals in cities such as Mumbai and New Delhi have run short of gas, sending families of the patients scrambling for oxygen cylinders.

In April, India’s medical oxygen consumption has shot up more than eight-fold from normal levels to about 7,200 tonnes per day, explained a top executive from the country’s biggest producer of medical oxygen.

According to the top official, a logistics crisis impeding the movement of oxygen from eastern India is predicted to hard-hit northern and western areas. But, it would also be resolved in the coming weeks as more distribution assets are deployed. He told Reuters Media that some of the containers are being flown in by the Indian Air Force.

Looking forward, most of these containers would be placed on special dedicated trains that would cut to supply across the entire country. Each container would carry between 80-160 tonnes of liquid oxygen and deliver the same to multiple cities.

Linde plc, an industrial gases and engineering company aims to double the number of oxygen cylinders in its distribution network to a minimum of 10,000 to improve the supply to mainly rural areas with weak infrastructure.

All of this sure could have been avoided, and the crisis need not be posing itself as a crisis at all. At least not on such a massive scale that we are witnessing, currently.

So, when this critical phase is finally over, as a citizen, one can only hope that there will be inquiries held. There will be an explanation for this inexplicable lack of any action on the part of the Government. Significantly, over a problem, the media reports identified during the first wave and even suggested solutions for the same.

When experts discussed a second wave during the first wave itself, was it such a difficult job to predict the increased demand for oxygen? So, what was the Government or the private healthcare sector doing to be prepared for a situation as critical as this one?

IPL 2021 Indefinitely Postponed: What Next For Players, Sponsors And Fans?