Who Is Wall Street Voting For? 5 Sectors Rooting For Biden (& 5 Praying For Trump)

Health, securities & investment industries are backing Biden, while oil and gas and agribusiness are supporting Trump.

The polling for the US Presidential election 2020 will start in a few hours. Democrat candidate Joe Biden has taken over the edge over President Donald Trump in many of the national exit polls and on the sufficient swing states. But the path to presidentship won’t be easy for him as Trump is also within striking distance. Trump can repeat his success in the Midwest and the swing states. Trump’s late voters can be a surprise factor like in 2016 when he defied all odds to beat as strong a candidate as Hillary Clinton.

The path to presidentship is not yet clear for Biden with Trump within striking distance.

Come what may, the corporate sectors have opened their purse strings wholeheartedly despite the US economy going through a slump. However, Biden seems a clear winner as he has overtaken Trump’s haul of Wall Street’s contribution to his candidacy. Even in the business industry, corporate houses are partisan with one backing Biden aggressively and the other supporting Trump. The Centre for Responsive Politics, a non-partisan research group, recently came up with data of companies donating money to the political parties in the US elections. 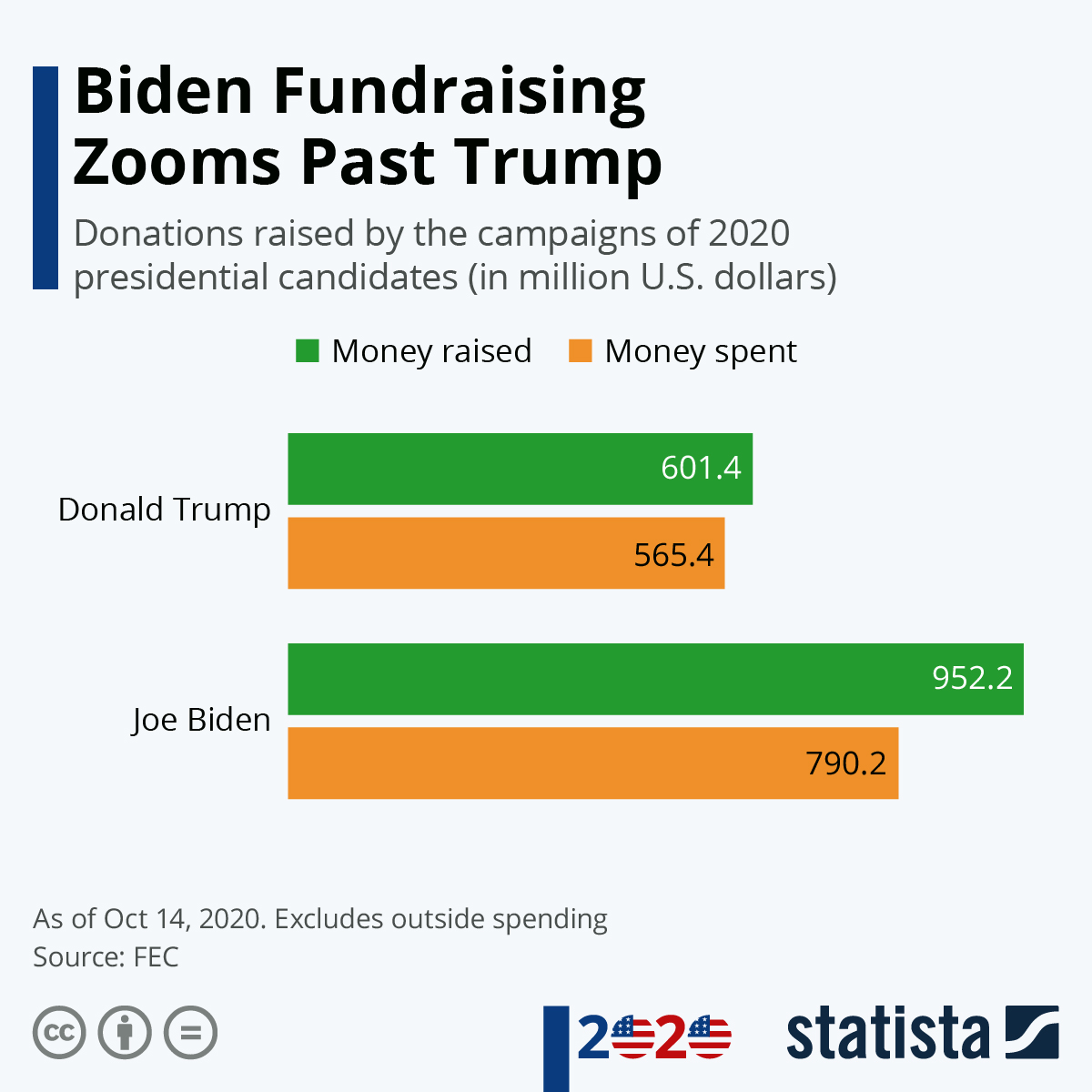 Let’s take a look at different industries which are backing Trump or Biden.

Others category is the largest single group to donate money to the US elections. The sector includes government employees (not their unions), nonprofit organizations, educators, religious groups and members of the armed forces. Democrats take the lead in others category with $831.4 million (56%) of the donation going to them. Republicans, on the other hand, have got $652.29 million (44%) for the elections. The University of California is Democrats’ biggest donor in this category with $9,711,414 in donations.

Miscellaneous business groupings include consumer retail goods, chemicals, steel, textiles and manufacturing. Democrats also have edge over Republicans when it comes to donation from miscellaneous business. For the current elections, Democrats got 56% donation at $233.4 million, while Republicans got $185.3 million (44%). Biden’s donations of $44,492,755 is way ahead of Trump’s $29,285,204.

Health sector most of the time lays its money on Democrats. As Trump drew criticism for his mishandling of COVID-19 and controversial statements, the health sector’s inclination towards Democrats became more significant. Its contribution to Democrats ($218.9 million) is almost double than Republicans ($113 million). In terms of donations to individual candidates, Biden’s $46,925,079 donations surpasses Trump’s $19,839,666 by miles.

The Healthcare sector’s contribution to Biden ($218.9 million) is almost double of what went to Trump ($113 million).

The insurance industry has reposed its faith in Biden with donations of $6.28 million and $4.33 million to Trump. The biggest contributors to him are Blue Cross/Blue Shield and New York Life Insurance. Blue Cross donated $2,045,088 to Democrats, while $1,113,385 to Republicans. However, Republicans ($38.8 million) are slightly above Democrats ($38.18 million) in donations.

Securities & Investments are heavily favoring Democrats with 63% contribution ($161.7 million) going to them and 37% ($94.5 million) to Republicans. This segment is also the single largest source of political contribution. The sector has pinned its hopes on Biden to a large extent. They gave $13,445,047 to Biden, while Trump got just $2,709,325.

Trump through his statements has created his image of a person not putting environment protection over oil industry jobs. As a result, oil industry is leaning more on Trump. According to an estimate, 83% of oil and gas industry donations have gone to Republicans ($48.5 million). Democrats got just $9.6 million (17%). Trump got $2,603,625, while Biden got a mere $1,280,239.

Two of the biggest oil companies, Exxon Mobil and Chevron, have increased their donations to Democrats compared to Hillary’s 2016 campaign. Chevron has donated almost $5 million in the 2020 election cycle, 28% of which went to Democrats. Exxon has spent a little over $1.5 million, 41% to Democrats.

Two of the biggest oil companies, Exxon Mobil and Chevron, have increased their donations to Democrats compared to Hillary’s 2016 campaign.

Electric Utilities companies keep a keen watch on the US government’s policies about clean air regulation and waste storage. They have been Republicans’ big supporters over the years. During the 2016 elections, they donated $21.6 million, 62% to Republicans and rest to Democrats. The current election cycle is no different. The industry has donated $23 million, 54% of which has gone to Republicans. The National Rural Electric Cooperative Association and Exelon Corp have contributed $1.82 million and $1.77 million respectively, giving 56% and 65.8% to Republicans.

Watch: Trump And Biden Battle It Out Over Minimum Wage

Commercial banks used to split their donations between Democrats and Republicans, but they have heavily favored Republicans for some last elections. However, they have gone back to their old strategy of splitting donations, giving Republicans slightly more money than Democrats. Republicans have got $22.7million against Democrats’ $20.7 million. However, as far as the individual performance is concerned, Biden’s donations of $4,851,728 far outpace Trump’s $1,990,296.

This industry has become relevant amid the US’s trade war against China. Ever since the 1990s, agribusiness has supported Republicans. In the current economic scenario, they are again supporting Republicans. They are donating $69.8 million to Republicans as against $36.9 million to Democrats. A similar inclination can be found for Trump who got $7,440,844 in comparison to Biden’s $5,007,449. Agribusiness comprises livestock and meat producers, crop producers, dairy farmers, poultry and egg companies, food manufactures and tobacco companies.

Construction is another sector where Republicans get much more support than Democrats. The sector includes home builders, general contractors, special trade contractors, building material, construction services and equipment companies. The sector has donated $81.6 million (64%) to Republicans, while Democrats received $45.9 million (36%). Trump is ahead in the individual race with $13,842,370 in donations. Biden has got $8,628,327.

Donald Trump, Narendra Modi, And The Power Of Rhetoric