Facing multiple scandals, Trump looks for a way to win and Biden is all set!

With less than two months until the polling date for the US Presidential Election 2020, our analyses reveal that President Trump is increasingly desperate to talk about the economy and law and order, but is struggling to change the focus from Covid-19 and his own scandals. Joe Biden remains the favorite to win.

Donald Trump and I have pretty different philosophies when it comes to giving our word.

When I tell the American people I’m going to do something — I follow through. pic.twitter.com/FCHpIGHtf2

President Trump seems to be settling on a message of law and order in an attempt to scare suburban voters into choosing him over Joe Biden. The problem here is that he is trying to say he can save America from the threat of impending lawlessness, while he is the current President.

Joe Biden is in the enviable position of having to merely persevere with a fairly risk-free approach and stick to the script. But this American politics, and his opponent is Donald Trump — two months will feel like an eternity, and there will be plenty more twists in the tale.

1. It seems increasingly unlikely that US Presidential Election 2020 result will be announced on same date i.e. November 3, 2020

Well into the twenty-first century, in the wealthiest and most technologically advanced democracy in the world, the expectation is now that the system will not be able to move with sufficient enough efficiency to determine who the President is by the morning after the US election 2020.

Due to the coronavirus, a vast number of voters, averse to the idea of queuing up in a non-socially distanced manner with other people, will opt to vote by mail. In many states, the availability of mail-in ballots has meant many votes have already been cast. The up-shot of this is that Democratic voters, more inclined to social distancing, are voting by mail, while Republican voters will be voting in greater numbers on election day. 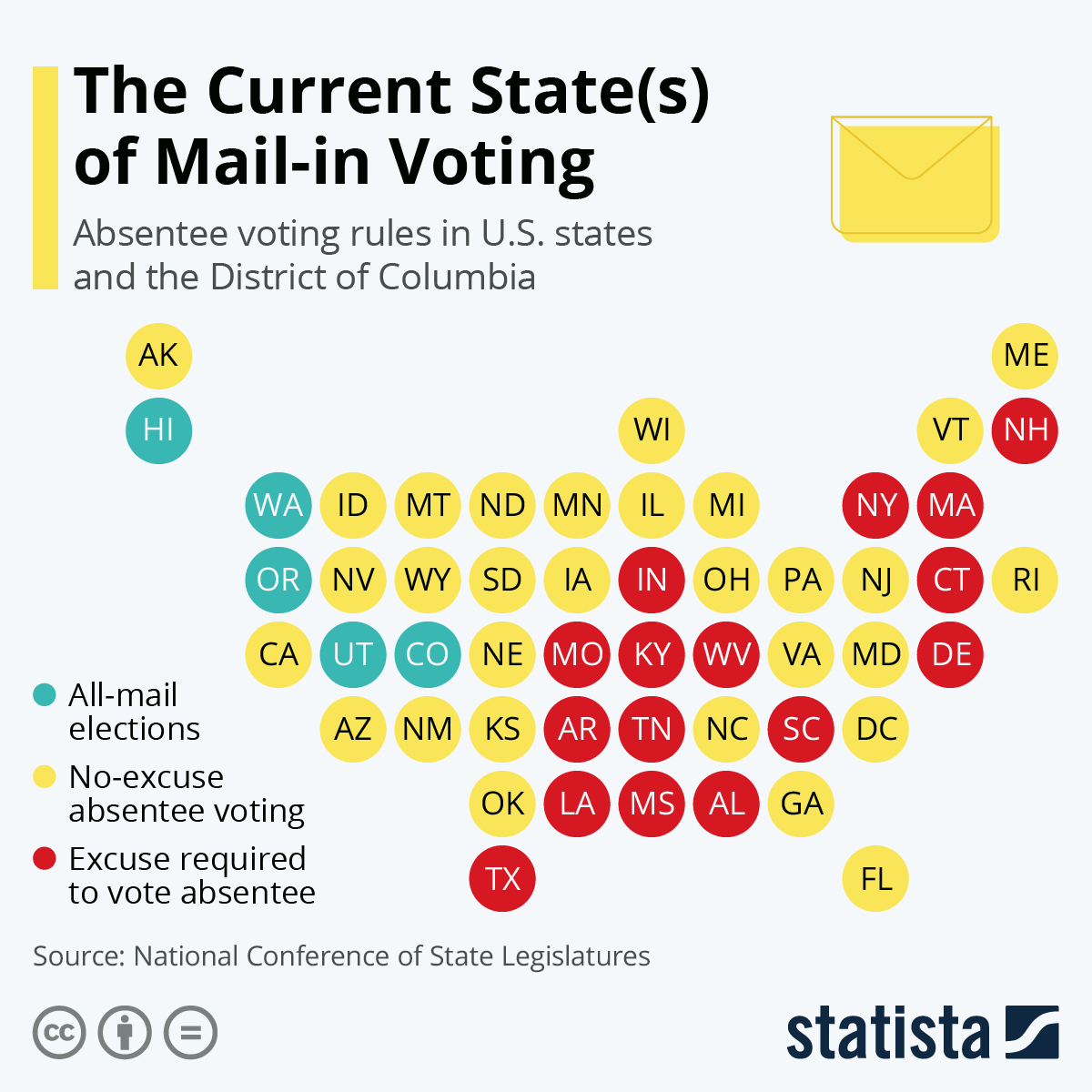 On election night, therefore, there will be what is being dubbed a ‘red mirage.’ Since in-person votes will be counted earliest, it will appear that Donald Trump has carried most of the swing states, and the election, by substantial margins. Over the ensuing days, however, as the mail-in ballots are counted, this ‘red mirage’ will fade, and Joe Biden will begin to overtake the president in the crucial swing states. It may be a week or more until the final results are known.

This is why President Trump has been trying to sow doubt about the validity of mail-in voting: if it appears that his margins are slipping in the days after the election, he will take to social media to push any narrative that he can about foreign meddling, ballot stuffing, and any other conspiracy theory he can think of to cloud the legitimacy of the result.

What happens if President Trump doesn’t accept the election results?

2. The polls still favor Biden, but the map may be expanding

President Trump’s post-convention bounce has faded, and his approval rating has subsided back to the consistent level he has maintained for most of his tenure.  Biden maintains a lead in most of the swing states, but most are in, or near the margin of error. In recent days, some states assumed to be well in the Democratic column, but have had little polling since the summer, have shown unexpected signs of tightening. Nevada, long considered safe due to its changing demographics and formidable local turnout operation, has also entered the margin of error in a recent poll, as has New Hampshire. Despite the tremors of discontent this may cause within the Biden campaign, they may find consolation in the fact that Nevada accounts for only five Electoral College votes, and New Hampshire a mere four.

Trump has always maintained an uncanny ability to ride out political storms, usually through a steadfast base, and by assigning blame elsewhere and distracting by moving dramatically onto something else.

The last week has provided an unusual circumstance in which two scandals are piled on top of each other:

The President’s alleged derogatory comments about veterans being ‘losers and suckers,’ and the revelations from Bob Woodward’s forthcoming biography, Fury, in which Trump admits, back in March, to downplaying the scale of Covid-19, and subsequently hosting massive rallies, despite knowing the dangers of the airborne virus.

Polling over the next week will be fascinating, because if he suffers no consequences in his approval ratings, it would be an unprecedented expression of solidarity, unprecedented from a political base; and if he receives a hit in the polls, it could be decisive, given his current underdog status.

4. The Democrats are betting heavily on Covid-19

Joe Biden’s campaign has bashed incessantly at the theme of Trump’s management of the coronavirus, and its ongoing strain. The fallout from Congress’s inability to settle on a new bailout deal, and a looming wave of evictions and business closures will certainly prolong the suffering; but the overall daily cases in the United States have receded a great deal over the last few weeks, and the mortality rate has also receded. By election day, American voters may feel the storm has passed, and agree with Donald Trump’s assertion that the country has ‘rounded the turn.’ If this is so, their attention may revert to pocket-book issues about the economy, and cast their vote for the candidate they feel may best get the country moving again.

5. The debates are on the way

There are three debates, and they may have an effect, but by the time they roll around, a huge number of voters will already have cast their ballots by mail. With so few undecided voters, it would take some severe incident or blunder or spell of disassociation from Joe Biden for the needle to be moved decisively toward Trump.

For many democratic voters, the debates may be little more than a box to tick. Dangerously for the President, most voters expect him to win the debates,a dynamic that sets the bar extremely low for Biden. Even an adequate performance may serve to transcend expectations, and therefore, the stakes are not especially high for him, and much of the pressure will be on Trump.

Nicholas Sheppard is a freelance journalist published in Politico, The Daily Beast, The Federalist, The Washington Examiner Flux Magazine, RT, and various Newspapers, and is the author of the novel Broken Play.

From Alexandria Ocasio-Cortez To Cersei Lannister: Lessons In Beauty, Power And Politics

Not Black Widow, Eternals Will Be Marvel Studios' Next Theatrical Release