The Trump administration issued a proclamation to suspend employment visas. The categories of visas suspended include; the H1B — a non-immigrant employment visa which enables US companies to employ professionals in specialty occupations which require special skills, H4 visas which are for spouses of H1B holders, and L1 Visas – which are transfer visas – till the end of 2020.

The Trump Administration cited rising unemployment as the main reason for this step and stated the decision would help create opportunities for US Citizens. This decision has prompted strong reactions within and outside the US.

Sunder Pichai, CEO of Google, and the US Chamber of Commerce CEO, Tom Donohue criticized the Trump Administration’s decision. Pichai said that the US had benefitted enormously from immigrants, his views were echoed by Donohue who issued a statement saying that such decisions will have an adverse impact on the US economy. Similarly, Donohue said, ‘Restrictive changes to our nation’s immigration system will push investment and economic activity abroad, slow growth, and reduce job creation,’

A number of other US policymakers have criticized Trump’s move. Alice Wells who recently retired as Principal Deputy Assistant Secretary of State for South and Central Asian Affairs said that the ability to tap foreign talent was ‘.. a US strength not a weakness’.

The total number of individuals likely to get impacted by Trump’s recent announcement is estimated at 3,75,000 and Indians comprise a large chunk of this. It is likely to impact IT Professionals (in the past five years, a staggering 67-72% of total H1B visas were issued to Indian nationals). The move will also have a lasting impact on Indian companies. 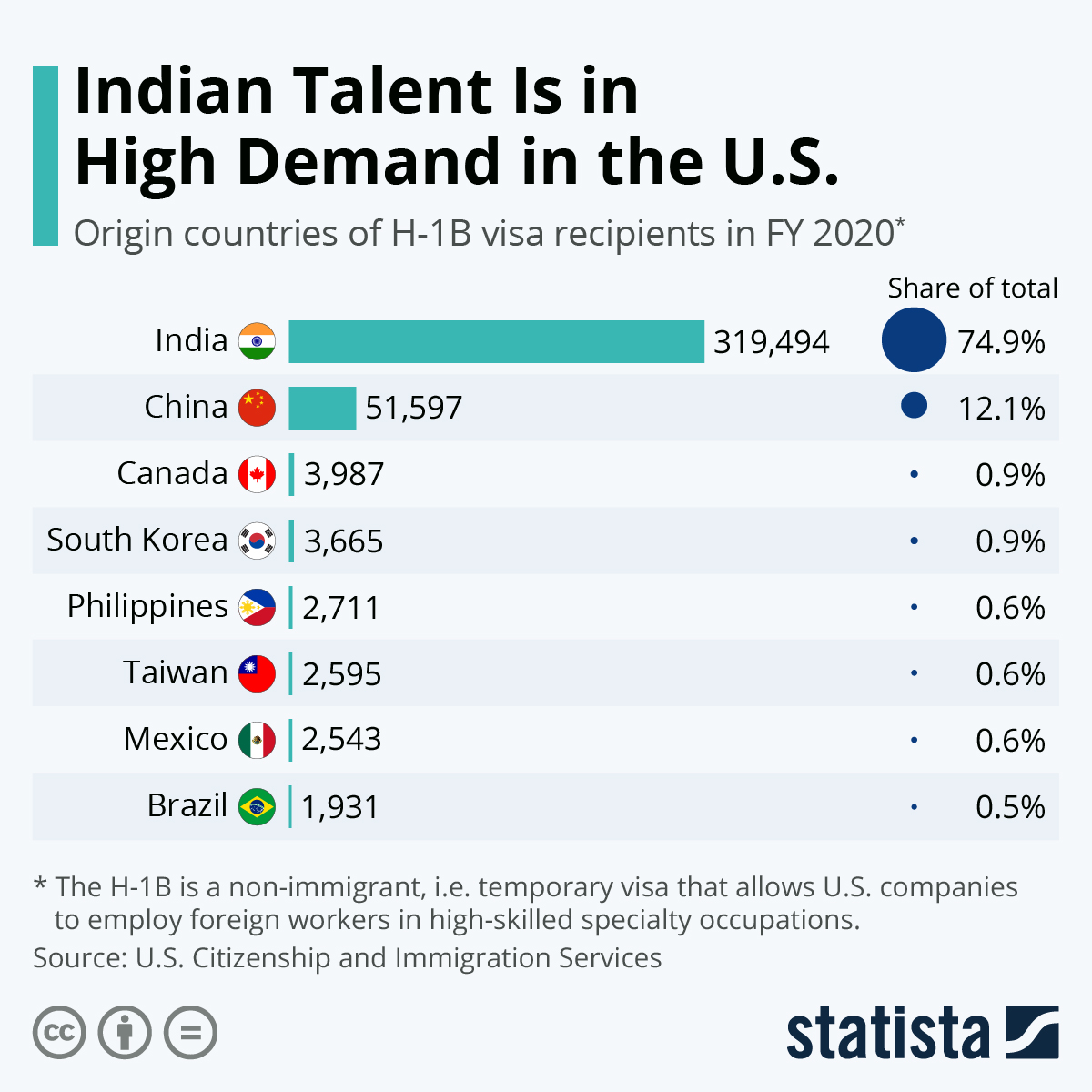 According to a rating agency, CRISIL, IT companies could be impacted by up to Rs. 1200 crore. IT industry body NASSCOM has argued that the latest decision will not just impact India, but the US economy too, since Indian companies have been providing employment to locals.

New Delhi was cautious in its response to the Trump Administration’s decision though, it did express concern, arguing that people to people contact linkages and economic cooperation are an important component of the relationship.

New Delhi was cautious in its response to the Trump Administration’s decision though, it did express concern.

The problems for India do not end at Trump’s decision to suspend employment visas. Recently the US also announced that student visas would not be issued to Indian students who were only pursuing online studies. The most significant reaction to Trump’s decision was from Democrat Presidential candidate and former Vice President, Joe Biden. Biden stated that, if elected, not only would he reverse Trump’s order, but that his immigration policy would focus on retaining talent and also encourage overseas students who have completed Ph.D.’s in Science Technology, Engineering, and Management STEM subjects to stay on.

Changes with regard to student visas

On July 6, 2020, US Immigration and Customs Enforcement (ICE) announced that students on non-immigrant F-1 and M-1 visas will not be permitted to remain in the US or legally enter the country if their studies were only online (students were permitted to only take one class online).

In spite of the Trump administration’s changes in the student visa regime, the number of Indian students pursuing higher education has been steadily rising in recent years.  Indians comprised the highest group after the Chinese and contributed not only in terms of tuition fees but by staying and contributing to the US economy, either through entrepreneurship or innovation.

US Academics have criticized the move, arguing that the shift to online education has been due to the coronavirus pandemic, and a large number of students will suffer on account of this decision. MIT and Harvard have sued the Trump Administration. In the lawsuit, both have argued that this is a way of compelling institutions to move towards classroom learning, and at this stage, it is virtually impossible for students to transfer to other institutions.

IT companies have already started reaching out to individuals impacted by the decision. In recent years, the number of Indians who have been granted visas as well as PR has witnessed a significant rise. A number of professionals have availed and benefited from the Global Talent Stream (GTS) which is part of Canada’s Global Skills Strategy program. Work visas of skilled professionals are processed within two weeks under the GTS

It is interesting to note that while the Trump administration has spoken about closer ties with India, and this is evident in terms of the defense relationship. But if one were to look at the economic realm — immigration and trade — the US President’s policies towards India have not been favorable. While some analysts have attributed recent decisions to the upcoming Presidential election, the differences with India over immigration and trade had begun to emerge soon after Trump’s election as President.

Observers of India-US relations, in both New Delhi and Washington DC, while acknowledging the expansion of defense ties between both countries, have expressed concern with regard to differences on issues such as trade and immigration, arguing that ‘Soft Power’ is an important component of the Indo-US relationship.

New Delhi needs to pay close attention to these developments, as immigration and education have contributed immensely towards bolstering Indo-US relations. While at this point in time, there is congruence on strategic issues, New Delhi needs to ensure that it can safeguard the interests of Indian Professionals, students, and IT Companies, and convey its reservations regarding recent US policies impacting these sections.

New Delhi should also not be too concerned about the result of the US Presidential election in November. Given the current economic and geopolitical dynamics, New Delhi’s importance is likely to rise and no US President can ignore that.

Stop Hate For Profit — Neither Is The Debate New For Mark Zuckerberg, Nor The Loss Big Enough

Coronavirus Vaccine ⁠— Why Scientists Are Optimistic About An Early Breakthrough

Reigniting The Free Speech Debate: In Defence Of The Right To Offend

When Trump Realized That Defeat Is Inevitable