Trump Decided Not To Pardon Himself. The Consequences Are Fatal.

Can the former president face legal troubles now that he is no more in the White House? Yes. Did he do anything before leaving the Oval to protect himself against any such possibility? Surprisingly, no.

Donald Trump is no more the president of the United States. This means he is no more immune to the transgressions that came into light during his presidency and also before that. In the last days of his presidency, Trump issued 73 pardons and further commuted the sentences of 70 people. But to much surprise of everyone, Trump didn’t pardon himself or any of his family members, including his adult children.

Why Trump didn’t pardon himself?

Not pardoning himself might have been the biggest mistake Trump made in his last days since there is enough legal trouble that can unfold for the former president. Let’s begin with the most recent one — inciting the US Capitol riots. Even if Trump had wished to pardon himself, it wasn’t in his capacity. The constitution of the United States provides the president the right to pardon offences but impeachment charges cannot be pardoned.

As for the other accusations, President Trump, according to the experts, prioritized impeachment and his public reputation over pardoning himself for the crimes he has been accused of. According to Carl Tobias, a professor at University of Richmond School of Law, specializing in the US court system, “I think that Trump was focused on impeachment, PR, rebuilding the brand, and 2024… Plus he would have looked weak and guilty with a self-pardon.”

Trump was reportedly warned by his legal team about his preemptive pardon for his children and himself that can make them look guilty. It is no secret that the former president has a desire of contesting elections again in 2024.

For the first time in history, the US Senate will be holding the trial of impeachment after the president has left the position. The 100-member chamber will conduct the trial in which former president Trump has been charged for ‘inciting violence against the US government’.

The trial shall continue everyday, except Sundays, until the Senate draws a conclusion. If Trump is convicted for inciting the mob to attack the Capitol building, the former president will be prohibited from holding a presidential office ever again.

Criminal offences for which Trump can face legal action

Beginning chronologically, first is the hush-money allegation that Trump faces. Allegedly, adult film actress Stormy Daniels and Playboy model Karen McDougal received money from the former president to stay silent on their sexual relationships with him. Trump’s former personal lawyer and “fixer” Michael Cohen accepted bargaining with the two women leading to campaign-finance violations for which, Cohen was sentenced to 3 years behind bar in 2018. Now that Trump is no more the president, he might face legal challenge for the same. The second criminal investigation is already under way in New York, scrutinizing Trump Organization’s business records. 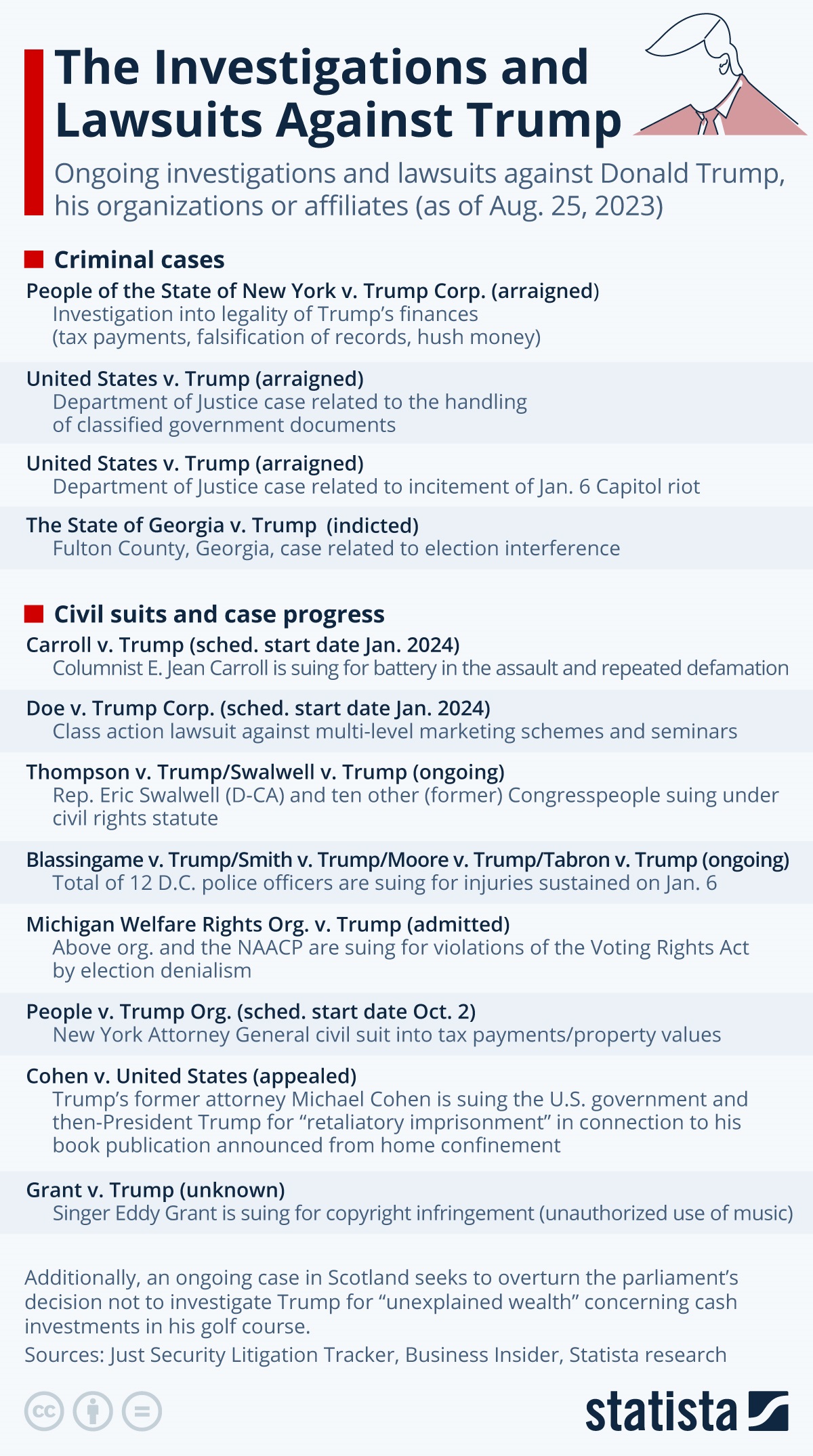 Next on the list is the tax-evasion case. According to an investigation by the New York Times, Trump paid only $750 a year in federal taxes. Despite being the wealthiest president in the history of the US, Trump’s income tax payment was approximately 140 times less than former presidents. Another grave criminal offence for which Trump might land in trouble is a real estate fraud. The needle again pointed to Trump’s personal lawyer, Cohen, in the year 2019 when he told Congress that the former president had inflated his property’s value to secure loans on his real estate assets. Not just this, he understated them to diminish the tax payable. Furthermore, Trump might also face legal consequences for ‘emolument’ which means, making profits or gains from holding public office or employment. According to US laws, every federal official requires consent from Congress to accept any gains or advantages from foreign state. The consent which Trump didn’t seek. And This includes hosting foreign diplomats and officials at his hotel in Washington DC.

Multiple women have accused Donald Trump of sexual harassment, many of whom have even filed defamation lawsuits against the former president. E Jean Carroll, a columnist for Elle magazine, accused Trump of raping her in the 1990s. She filed a defamation lawsuit against Trump which, he is still contesting.

Another similar lawsuit was filed by Summer Zervos, who was a contestant on The Apprentice, Trump’s television show. Last but not the least, Trump also faces a lawsuit from his niece, Mary Trump, for illegally stealing her legal inheritance and ruling her out of the family business.

Trump Set A Low Bar, But Will Biden Manage To Outshine Ex-Boss Obama?