The New Terrain In Post-Pandemic Tensions: Tech Firms vs The State

Senate hearings, apologies, and promises followed. But before the spectre of large tech firms influencing elections can be laid to rest, another US presidential election is upon us. In the last few days, Twitter, the incumbent president Donald Trump‘s platform of choice, labeled his posts as “unsubstantiated” (fact-checking) and “glorifying violence”. The president responded by signing an executive order limiting the rights of platforms to censor or restrict free speech. These are far from being just another salvo from an outspoken president, with a spotty record of acting on his threats. Neither are they restricted to concerns about free speech and fake news; though they are important components. They are portents of a reckoning that has been brewing for some time due to the friction between firms, which exercise enormous market power, and the state. These emerging frictions were exacerbated by Facebook’s involvement in elections, and now, they will be fast-tracked by the COVID crisis.

Sample some numbers to get a feel for the context of the present impasse. 7 of the 10 firms with the largest cash reserves are technology-driven. The total cash reserves of the 5 largest technology companies (Microsoft, Alphabet, Apple, Facebook, and Amazon) as of November 2019 was $461 Billion.

To put that in some perspective, the total spending by the governments of Italy and India in 2018 was $396 Billion and $305 Billion respectively. A substantial portion of this expenditure is financed by borrowings, while the firms sit on mountains of accumulated wealth available as cash liquidity. Besides their financial muscle, these tech behemoths also have unprecedented levels of market power, and with their control of data flows and information sharing platforms, social and potentially political power.

This extent of concentration of power is not likely to sit well with any nation-state, the recent impact of the pandemic notwithstanding. To better understand where the frictions originate from, consider an analogy, where a nation is a very large hotel and the hotel management is the state. The brief of the management is to maintain and provide services that cannot be otherwise provided for by individual members. The management imposes some rules on the residents and collects taxes for the service they provide. However, transactions among the residents are mostly left to the devices of the concerned individuals, although the ambit of these transactions is defined by the rules of the hotel. Consequently, the management and its residents have a symbiotic relationship. But, concentrations of economic, social, or political power in any group of residents (firms) can undermine the management and consequently threaten the stability of the hotel. The state is therefore likely to act to prevent such an eventuality. There have been calls, in the recent past, to check the concentration of wealth and power in tech behemoths, but the calls are likely to grow shriller in the coming months.

All the residents of nation sized hotels have had access to computers and use a variety of services offered by firms owned by groups of residents. Now, along comes a pandemic and the residents cannot leave their rooms without risking life and limb. Suddenly, almost all of their communication and economic transactions move to this parallel virtual world, where the hotel management has little say. Simultaneously, hotel management takes desperate measures to moderate the impact of the pandemic: they transfer money to the residents, try to make sure they retain their jobs, and ensure that enough hospital beds are available. But the more they invest in their residents, the more the value that is accreted by the firms operating in the virtual world. In fact, the accumulation is accelerated. Their operations are hardly affected, while their services are used more than ever. Every transaction is a data point that can be collected by these firms and the more data they have, the more valuable the existing stock of data. The rate at which value is generated therefore exceeds the rate at which the usage of these services grows. This creates an enormous imbalance, where the management explicitly funds an enormous expansion of firms that exercise outsized control in the virtual world and can, if they so wish, undermine the real-world hotel by the choices they make in the virtual world.

The extent of control that a few firms had over the information and data that drive the modern economy was already at the high-water mark before the pandemic.

In the coming few months we might be in the midst of a flood. Even more importantly, if we are to operate and interact primarily in the virtual domain, there may be increased demands that states get a bigger say in determining the rules of the game.

Immigration: Who is a resident?

The hotel management is vested with the authority to choose who can be a resident of the hotel and who cannot be. A resident gets many privileges, key among which are the ability to take a job with the many firms operating the hotel. In the old world of two months ago, this would mean that any firm that wanted to hire someone who was not a resident of the hotel, they would have to get permission from the management. Now, as everyone is working from their rooms in any case, a firm might be able to hire someone to work for them while sitting in some other hotel. Some would point out that this would be very similar to outsourcing or offshoring, however, these need not be low skills jobs that no one in the hotel wants to do. These might be top of the line, high-value addition, high wage employment. Cost is, of course, a driving factor behind the choice, but the more immediate determinant is the increased comfort that firms have with the idea of employees working from home. This would, at least in the technology sector, truly internationalize the labour market. But doing so would compromise the ability of the hotel management to exercise its power, at a time when its direct intervention is supporting the economy on which the firms survive.

Immigration has always been a hot button issue, not least in the Brexit referendum and previous presidential election in the US.

Given the amount of their tax payer’s money the governments have and will spend to counter the pandemic, it is very likely questions of immigration will be high on the agenda. Any perceived threat to their ability to regulate access to resources that they have either created or protected might be another flashpoint between the state and large tech firms.

Philanthro-capitalists: a not so hostile takeover?

The hotel management is comprised of individuals (politicians) concerned about their reputation among their residents. They might rely on help from these firms to manage their reputation, but if specific firm owners look like they will take over management, they will have to be dealt with. For instance, with the management struggling to make provisions for the pandemic, if one of the firm owners seems to be able to provide the money, foresight, and logistics required then the owner would be a threat to all in the management. Partly because she might take over their position, but more importantly because her actions will likely undermine the entire purpose of the management. If someone outside the management can perform the same duties and perform them without the bureaucratic delays and inefficiencies, then why bother with the current management. 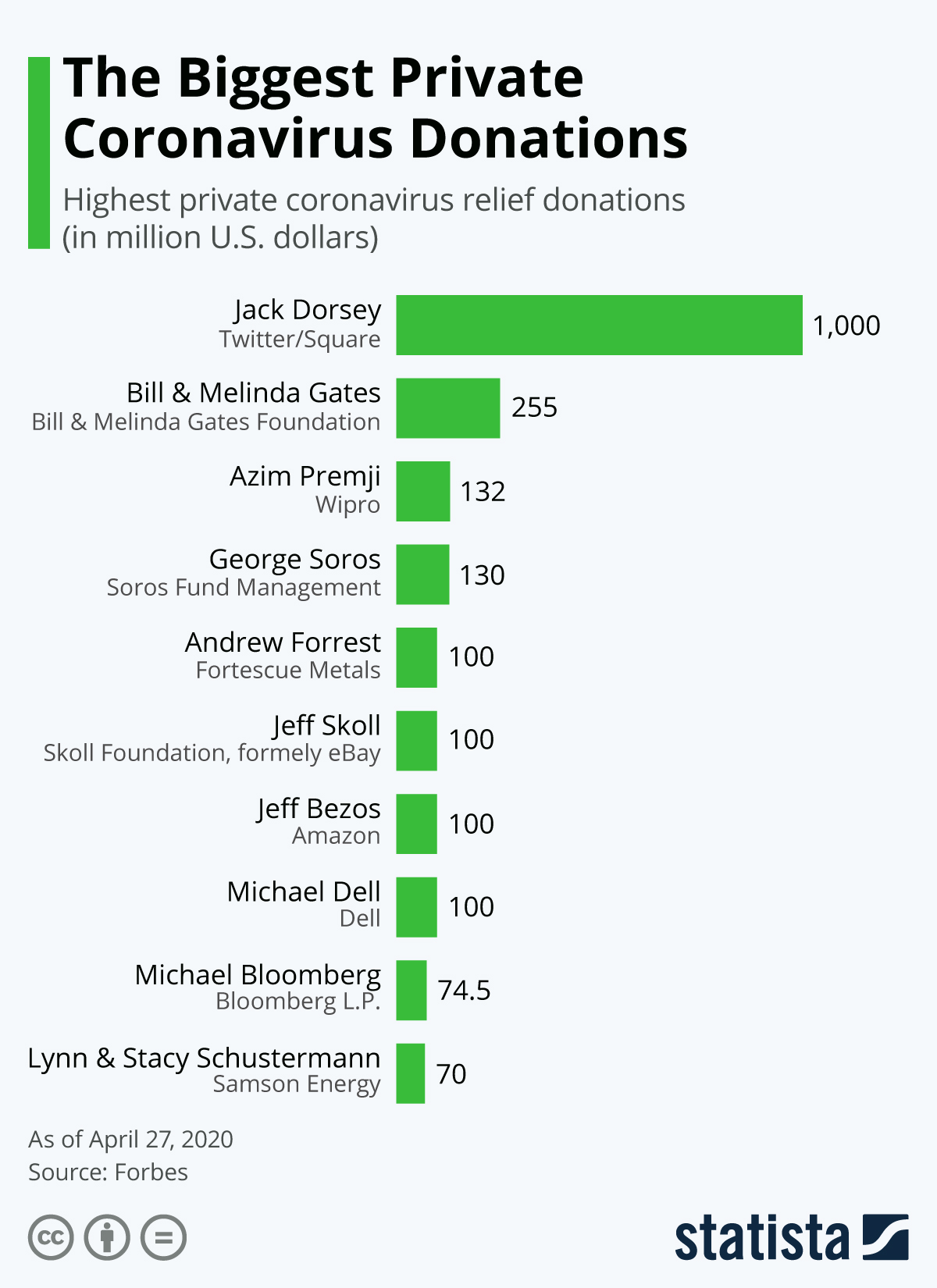 Anand Giridharadas, in his book “Winners Take All: The Elite Charade of Changing the World” provides an excellent exposition of the problems created by billionaire philanthropists. But one which might be most relevant to our present concerns is that they bypass the political system that we put in place to govern ourselves. The light in which people like the genius, soothsaying, philanthropist, Bill Gates, and the most generous billionaire as per the proportion of his net worth, Jack Dorsey, have been portrayed might have given pause to many planning to run for elections. While the public might hold them in high regard, the state itself might see their actions as an attempted takeover of public services.

This is not an economic analysis of the impact of large tech firms on social welfare. There has been and continues to be much work on it by competition policy experts. This is merely an attempt to identify the reasons for which frictions between governments and large tech firms might increase due to the pandemic. The European Union has already taken some actions to moderate the influence of these firms. The others may be forced to take a position soon.

Almost a century ago, anti-trust regulations brought an end to the gilded age in the US. Fueled by great technological innovations of that era, robber barons had become fabulously wealthy and politically powerful. The resulting concentration of money and power led the US government to reform itself, and actively break up firms like Standard Oil. It is difficult to predict if the scale of government’s intervention will be, or even can be of the magnitude that it was back then. It is very likely though that the debate surrounding the questions of fake news, freedom of expression, platform liability, and market power will be where the next big battle of ideas will be fought. The results will determine the extent and nature of government intervention for the information age.

America Starts A Game Of Monopoly On The Moon Without Russia

From George Stinney To George Floyd: The Evolution Of Systemic Racism In The US

Watch Atleast One Of These Lesser-Known Offbeat Films This Weekend