Report Card: How India Is Handling The Brutal Second Wave Of Covid-19

How is India handling this second wave of Covid-19 in comparison to other countries? What is the global media’s opinion about Narendra Modi’s image-conscious government?

India’s media houses continue to air stories of the grim and gloomy scenario. With all the time to prepare for the second wave of infections, India is today amid the biggest tsunami of Covid-19 cases in the pandemic’s history. According to the statistics shared by Our World in Data, India has already witnessed more than 18 Million cases, with 14.8 million recovered and killing 201,000 people.

Here is how India’s Covid-19 policy working out for the falling masses.

The number of deaths recorded all across the world was 400 million. Gibraltar is the nation on top of this unfortunate list, with the highest death of 2791 per million people. The United States comes second on this list with 3.2 million deaths, followed by India with 1.98 million deaths.

This chart shows us how Mexico has emerged out to be one of the toppers in the highest death rates while India has a record of lowest death rates. Primarily, India is at 1.11 percent (death rate) of the Covid-19 infected world population. So, compared with countries like Russia and the other EU countries, Mexico is seven times higher on this list than India.

In terms of testing, India has conducted over 25 Crore tests till now, with more than 13,00,000 sampled daily. With the cases of infection surging, the Central government has asked all the states to hike up the percentage of the RT-PCR tests to more than 70 percent. Though, experts believe that states like Maharashtra, Gujarat, Chhattisgarh, and Kerala account for the more extensive outbreaks in the country. But, these states are not engaging people to get themselves tested enough via RT-PCR tests.

The state of Maharashtra has the record of the highest deaths of 65,808 people.

Gujarat and Chhattisgarh may be recording a low percentage in testing as low as below 35 per cent. Meanwhile, India started the world’s most extensive vaccination program that began in January, but it fell short of the government’s goal. According to one of India’s most credible media houses, only a tiny population of about 5 percent has received the single dose of the shot, and 0.8 percent of the country’s population has received the second dose as well.

News media houses worldwide have started to publish focused opinion pieces, detailed reports, and editorials on India’s current grave situation. There is global limelight on how the government is lacking in key aspects to get a grip on it. An acute shortage of medical oxygen and even cremation grounds has taken the national capital up a storm. 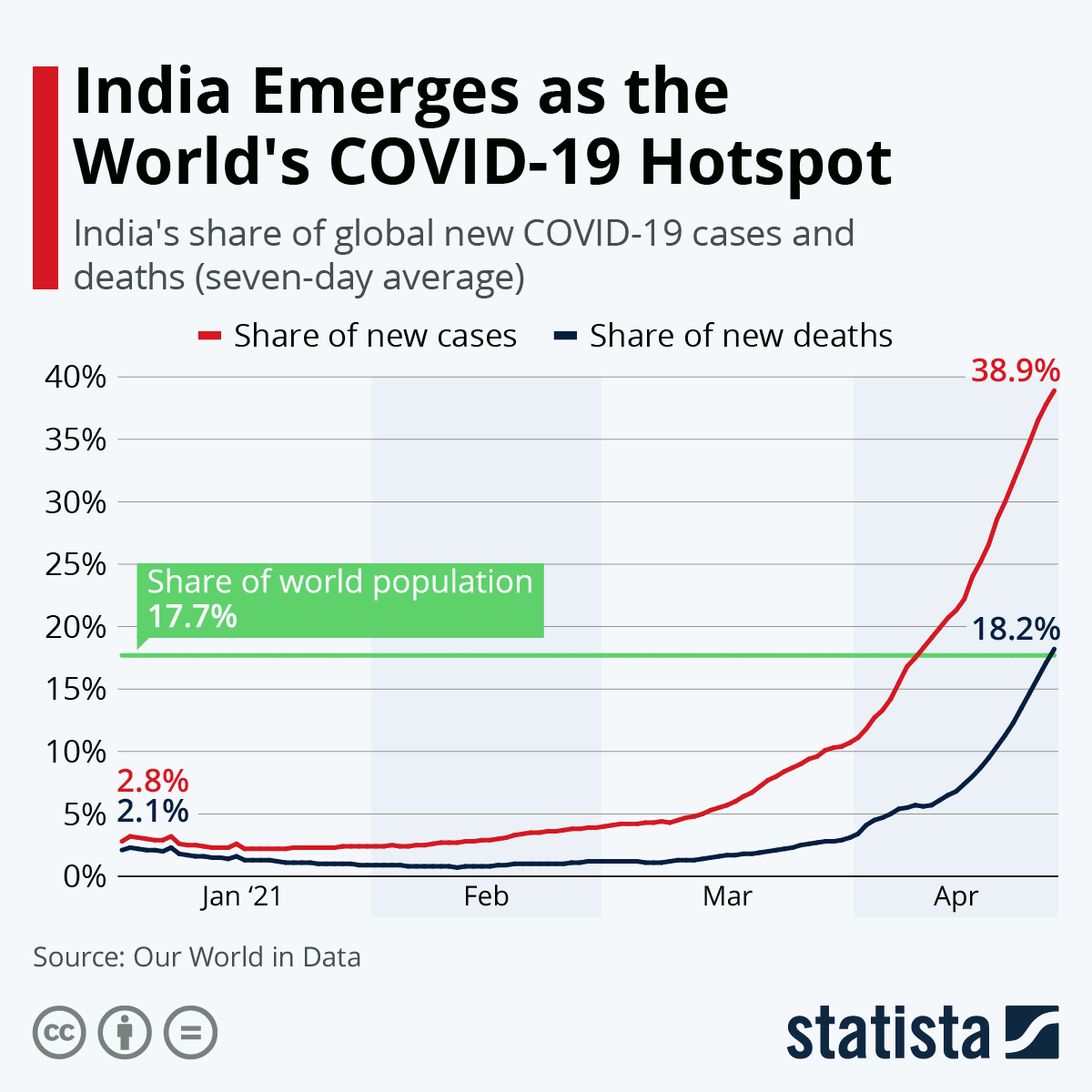 The Indian media is full of stories from all over the country that looks only scary and full of horrors. But, the world’s focus on the image-conscious Modi government may shift the political dynamics between India and other countries. Many countries are following how India is handling the current wave of infections compared to the rest of the world quite closely.

In the rollout of the vaccines in the initial stage, the Centre had only restricted the shots for people above 45 years, front-line workers, and healthcare staff. Though, now the times have changed, and so has the directive by the government. The states are now all set to decide how to manage the vaccination drive between 18 and 44 years. It is worth noting that this age bracket accounts for about half the population of India (595 million Indians).

Earlier, the Centre mentioned how India would play a vital role in the entire vaccination program. It primarily focused on how India was the factory of Coronavirus vaccines for the world. The initiative did provide the shots to all front-line workers, healthcare workers, and all above 45 years of age.

It looks like things may change from May 1. While the Centre will continue to provide vaccine shots for those above 45 years of age, it will now be the state government’s responsibility to distributing vaccines between the 18-44 years age group. According to another National Daily report, the cost involved in vaccinating this age group across the country could come up to about ₹71,349 Crores.

In the new vaccine policy, the Centre is to distribute half of India’s produced vaccines, and the remaining half would be made available for the states. It will also include private hospitals and open markets. Also, the Centre has declared that it will continue to support other states and the union territories out of the 50 per cent of vaccines that it will hold. So, the Centre’s role in the new Covid-19 vaccine policy is to play a crucial role in this vaccination drive scheduled to begin from May 1.

What is the Centre’s Budget for Vaccination?

During 2021-22, the Union government had provided ₹35,000 Crores for the vaccination drive. Now, it seems the cost of procuring the vaccines has increased, leading to a shift in vaccine policy. However, the change in this new policy only indicates that the states will have to double up vaccinating their people compared to the Centre. This way, the Centre could save up some money from the allocated vaccination budget.

Now, India needs to implement much stricter rules and behavior codes for the citizens to follow. Only this way could the country possibly stop this further spread of the infection. The current situation has already negatively impacted our health infrastructure, and it could further stress that space out. Shutting down schools, colleges, all educational institutions, restrictions on crowding, gathering, political or religious rallies should be put in place to flatten the curve. However, experts say it is quite a challenging time for the entire world, and it is equally challenging to predict India’s future, too. Now more than ever.