The Gorgeous Monarch Butterflies Are One Spring Away From Extinction

From millions just a decade ago to possibly none in the coming decade: A massive dip in Western Monarch Butterflies’ population raises fear of yet another species going down at the hands of Climate Change.

Butterflies are delightful, we all would agree. They are a source of joy and curiosity. But like every other good thing, 2020 affected the butterflies too. A report by the World Wildlife Fund and the Mexican Government found that the population of monarch butterflies that migrated to Mexico to ride out the cold winter months in the north fell 26% from a year earlier. The reason behind this is the deforestation in the monarch Biosphere Reserve in Michoacán. The reserve lost more trees in 2020 compared to 2019.

Western monarch butterflies head south from the Pacific Northwest to California each winter, returning to the same places and even the same trees, where they cluster to keep warm. The monarchs generally arrive in California at the beginning of November and spread across the country once warmer weather arrives in March.

Watch: Why the Monarch Butterfly population is declining.

The Devils for Monarch Butterflies

The trees provide shelter to the butterflies to roost. A combination of logging, falling trees and drought has hampered the process. This was accompanied by the reduction of milkweed in the butterflies’ breeding places. Another reason was the wild and erratic weather that the United States of America witnessed. This killed the milkweed blossoms which sort of act as monarch butterflies’ nest and breeding place. This affected larvae and the growth and health of the eggs.

But the biggest devil was climate change. The increasing greenhouse gases and the subsequent results have altered temperatures and other factors which are proving to be unsuitable for butterflies.

Despite the concern, the butterfly isn’t in danger of extinction, said Jorge Rickards, director-general of WWF-Mexico. He added, “Monarch butterflies show us how individual work, in this case, migration, can become an exceptional collaborative exercise, when all these migrants gather in the forests to hibernate together and buffer the climate.”

The Xerces Society, a nonprofit environmental organization that focuses on the conservation of invertebrates found out that only 29,000 butterflies last year. But this year, the numbers were dismal. Popular spots like Pismo State Beach Monarch Butterfly Grove and Natural Bridges State Park saw just a few hundred butterflies this year. 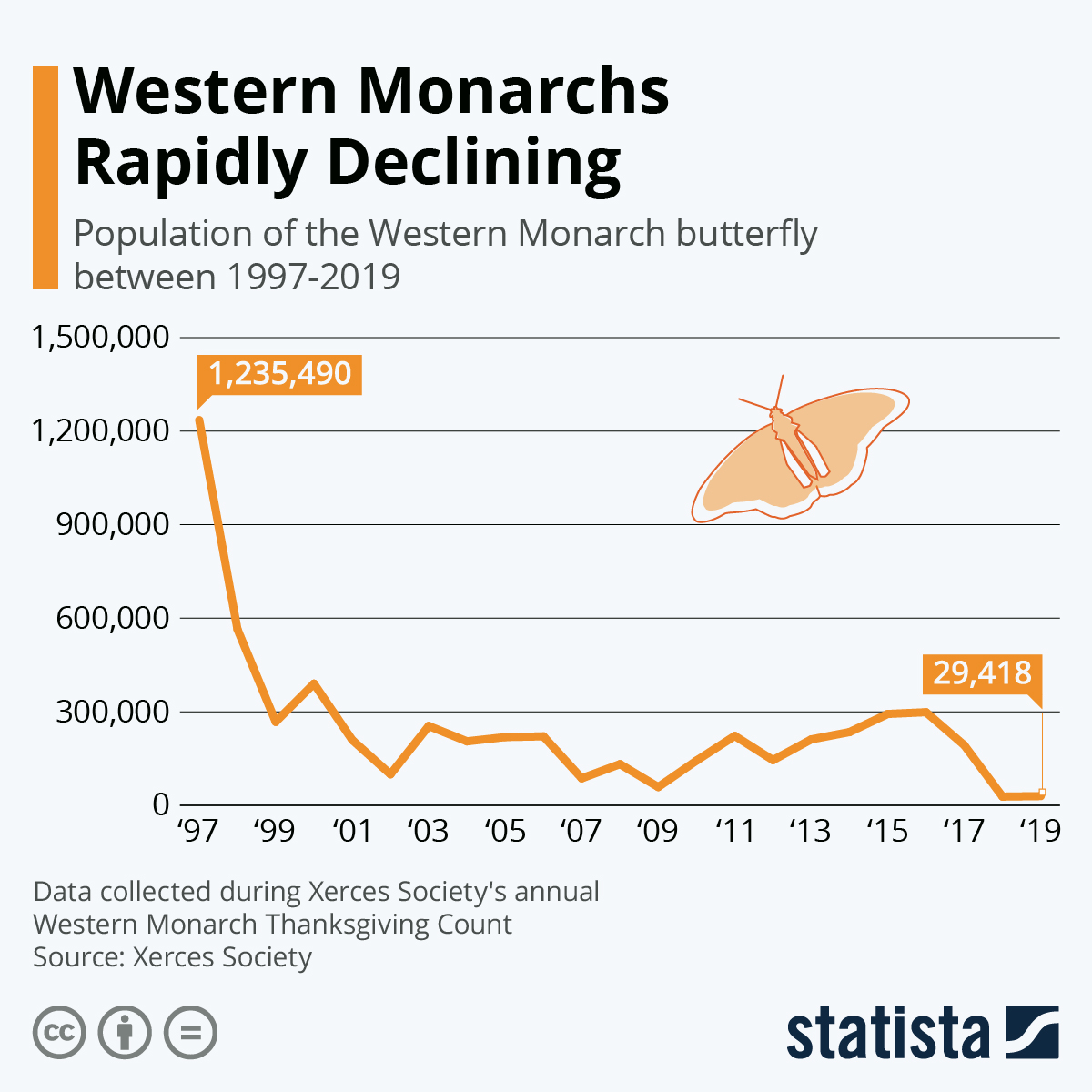 “These sites normally host thousands of butterflies, and their absence this year was heartbreaking for volunteers and visitors flocking to these locales hoping to catch a glimpse of the awe-inspiring clusters of monarch butterflies.”

Sarina Jepsen, director of endangered species at the Xerces Society

A Washington State University study from 2017 predicted that if the monarch population dropped below 30,000, the species would likely go extinct soon if nothing is done to save them.

What can be done?

Xerces Society recommends people plant early-blooming flowers and milkweed to fuel migrating monarchs on their paths to other states and provide them plenty of breeding grounds.

Monarch butterflies lack state and federal legal protection to keep their habitat from being destroyed or degraded. Federal officials did declare monarch butterfly “a candidate” for threatened or endangered status. But that doesn’t gather any help in terms of capital or manpower.

USA, Canada and Mexico have to collaborate their efforts in order to ensure the survival of the butterflies.

This is essential keeping in mind monarch is the only butterfly known to make a two-way migration like birds do, according to U.S. Forest Service. They cannot survive the cold winters up in the north, unlike other butterflies.

Mars Has Lots Of Water, Man Has His Lemons. So, Is 'Lemonade' Possible?