The government worsened the Covid-19 crisis through its own acts and omissions.

INSACOG conveyed “high concern” due to the greater transmissibility and virulence of the new variants to the Government of India in February 2021. Yet the government ignored the concerns and went ahead with Kumbh Mela and massive election rallies in several states.

The Covid-19 crisis rages on in India with nearly 350,000 new infections and over 4000 deaths being reported every day. The government, at the state as well as central level, is playing catch-up due to a chronic lack of preparedness, complacency, and, above all, a complete disregard of scientific evidence and clear warnings from experts. In short, we are paying dearly for not listening to those who knew best.

A recent report by Reuters, which has been largely ignored by the mainstream media – perhaps on purpose because the government doesn’t like being shown in bad light – shows governmental apathy towards an early scientific warning communicated to it in February 2021. The warning came from its own group of scientists appointed for the specific purpose of monitoring mutations in SARS-CoV-2, the Covid-19 virus.

According to the report, the Indian SARS-CoV-2 Genetics Consortium (INSACOG) informed the government officials reporting directly to the Prime Minister of India, that among the mutations in the Covid-19 virus strains, the mutations called E484Q and L452R, were of “high concern”. INSACOG is a group of 10 National Laboratories established by the Ministry of Health and Family Welfare on December 25, 2020, to carry out genomic sequencing and analysis of the Covid-19 viruses.

The draft statement said, “there is data of E484Q mutant viruses escaping highly neutralizing antibodies in cultures, and there is data that L452R mutation was responsible for both increased transmissibility and immune escape”. This means that mutated variants could spread more quickly and escape human immune response more easily.

INSACOG is tasked with correlating epidemiological trends with genomic variants, and supplying the government with the scientific understanding required to effectively deal with the Covid-19 pandemic. Simply put, INSACOG is a dedicated team of scientists whose job is to study Covid-19 virus and its emerging variants and keep the government abreast of the mutations occurring in the virus and their potential ramifications for public health so that the Central Government could move in quickly to minimize health risks to the public.

In an interview to Karan Thapar for The Wire, Dr. Rakesh Mishra of INSACOG confirmed that INSACOG’s concerns, as reported by the Reuters, were conveyed directly to Dr. Surjeet Kumar Singh, the Director of the National Centre for Disease Control (NCDC), to whom INSACOG reports. “It was a high concern and there’s no doubt about it. We were very, very concerned,” Dr. Mishra said, and added that INSACOG was “dreading something bad would happen”. Dr. Mishra also said it was impossible to believe that the Prime Minister was not apprised of INSACOG’s concerns.

Even without Dr. Mishra’s saying it, it’s not believable that despite a centrist, top-down governance, the Prime Minister was not informed of the grave concerns of an urgently appointed scientific group regarding the most pressing crisis of the day. Also, had he not been informed, it would have been a huge lapse on the part of the government, given the magnitude of the current crisis. And for such a slip-up, heads would have rolled, and Dr. Surjeet Kumar Singh would probably not have been the director of the NCDC any longer. That the government was aware of the INSACOG’s concerns for a while is also borne out by the press release by the Ministry of Health and Family Welfare on March 24, 2021. So by all accounts and informed surmises, the Prime Minister did know of INSACOG’s concerns, and just how grave they were.

The March 24 press release acknowledges that INSACOG had flagged as many as “771 variants of concern (VOCs) in a total of 10787 positive samples shared by States/UTs”, including the UK (B.1.1.7), South African (B.1.351), and Brazilian (P.1) strains. “The samples with these VOCs have been identified in 18 States of the country”, said the release.

Regarding the E484Q and L452R mutations, which the INSACOG had raised “high concern” about, the press release acknowledges “immune escape and increased infectivity” and also that the mutations had been “found in about 15-20% of samples” from Maharashtra, but plays the threat down, saying that “these have been categorized as VOCs but require the same epidemiological and public health response” and “treatment as per National Treatment Protocol”.

Not only was INSACOG’s “high concern” completed blotted out, but the Ministry also said that while these variants dodged the immune system effectively and were more infectious – meaning the variants could make a far greater number of people far sicker far more quickly – there was no real cause for concern, which was the exact opposite of what INSACOG had said. A democratically elected government cannot be excused for deceiving the people on matters of public health and safety. But one might still take a slightly tolerant view of it, if the government, despite failing to take the public in confidence, acts on the undisclosed information to weather the crisis. Not so, in this case. 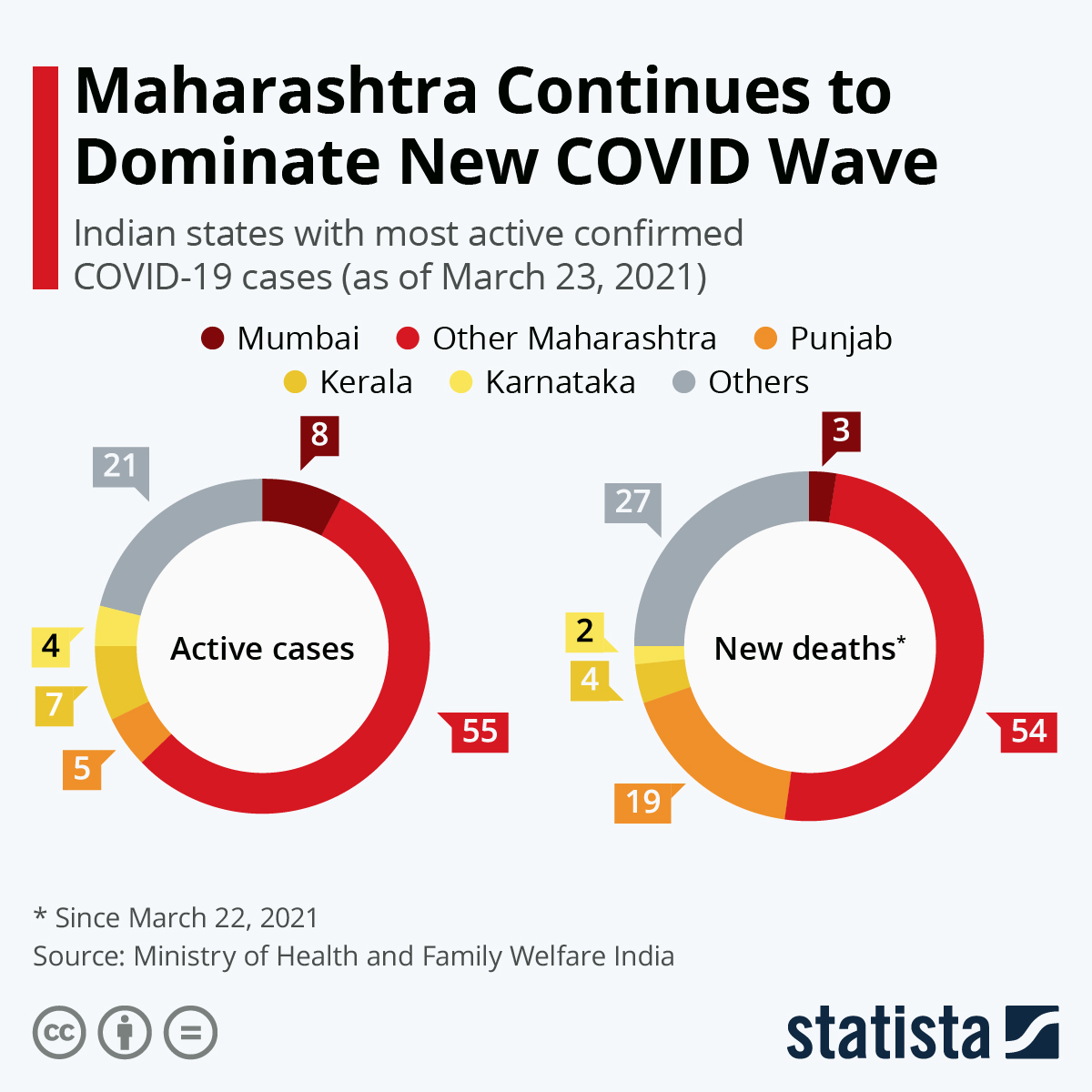 Beginning on February 10, 2021, with 11,000 cases, the second wave had started taking its toll when INSACOG had voiced its “high concern”. The government sat on the information for around a month before releasing it to the public with the “high concern” taken out. The usual defense of preventing widespread panic makes absolutely no sense because if fear keeps people cautious and saves lives, which it definitely does, it’s far more preferable to the widespread misery and heaps of dead bodies that we now have.

Instead of preparing for worse,  due to “continuous decline” in cases, the Union Home Ministry ordered the closure of two special Covid-19 care centers on February 23, 2021. This included India’s largest Covid-19 facility at Radha Soami Satsang Beas in South Delhi, which had to be later revived in April 2021 due to massive surge in cases. INSACOG’s well-founded concerns were completely disregarded, and the government went about its political business. While no expert had said it was time to let the guard down, the Prime Minister went ahead and declared victory against Covid-19 to the world in an embarrassingly arrogant fashion on January 28, 2021, itself.

When Shahid Jameel, chair of INSACOG, was asked about governmental apathy to scientific warnings, he said, “Policy has to be based on evidence and not the other way around,” adding, “I am worried that science was not taken into account to drive policy. But I know where my jurisdiction stops. As scientists we provide the evidence, policymaking is the job of the government.” The government had different ideas about what to do with scientific advice.

INSACOG had warned of increased communicability as well as the potency of the new variants in February 2021. It was acknowledged by the government in its March 24 press release, and soon after a Kumbh Mela was organized in April 2021. Seventy lakh (seven million) people participated with the social distancing norms and mask protocol thrown to the wind. The medical officer for the Kumbh, Arjun Singh Sengar, said, “The situation was challenging for us as the crowd, though relatively smaller this time was big enough to violate the norms of social distancing.” In fact, it could be a major super-spreader event, according to some experts. But, well, people’s faith couldn’t be ignored even if those with not as much faith were also at lethal risk.

On March 7, 2021, the Prime Minister launched the BJP election campaign for West Bengal Assembly polls. The on April 17, 2021, he expressed his elation at seeing a large crowd at his rally in West Bengal’s Asansol on the day when over 200,000 new Covid-19 infections were reported along with over 1000 Covid-19 related deaths. The massive rallies in the runup to the Bengal polls, in which large crowds rubbed shoulders with little regard for masks or social distancing, could be the super-spreaders just as well as the Kumbh Mela. And while Assam’s former Health Minister and now incumbent CM, Himanta Biswa Sarma, preferred to find no link between poll rallies and the surge in Covid-19 cases, the elusive “link” has been found. Although, link or no link, it was too great a risk to take in the circumstances.

The Bengal situation was not helped by the unprecedented eight-phase election schedule announced by the Election Commission on February 26, 2021, which the BJP welcomed and Mamata Banerjee bemoaned, with polling scheduled between March 27 and April 29. Noticeably, the Union Ministry of Health and Family Welfare had issued the press release with INSACOG’s “high concern” whittled down to little concern only on March 24, 2021, when the election campaign in all four states was well underway, even though INSACOG had sounded the warning in February 2021 itself.

It is difficult to not conclude that the government not only failed to prepare for the second wave but also actively contributed to the spread of a resurgent virus that was returning with enhanced virulence and transmissibility.