How Bad Is Your Child’s Smartphone Addiction?

Love them or hate them, smartphones have become omnipresent. While they have many positive uses, people remain concerned about the potential negative harms of excessively using them – especially in children and teens.

In 2018, there was a whopping increase in smartphone usage by the age group between 16-24 years old. However, alongside this increase in smartphone use, studies have also shown mental health has become worse in this age group. Smartphones have become such powerful and versatile tools that, people feel they are literally not dispensable. In fact, one feels lost when he cannot find his phone. Some researchers agree that adolescents are more likely to demonstrate addiction-like symptoms with their cell phone use than other age groups. Studies prove the usage of smartphones peaks during the teen years and gradually declines thereafter. A survey has shown that 72 percent of teens feel the need to immediately respond to texts, social-networking messages, and other notifications. 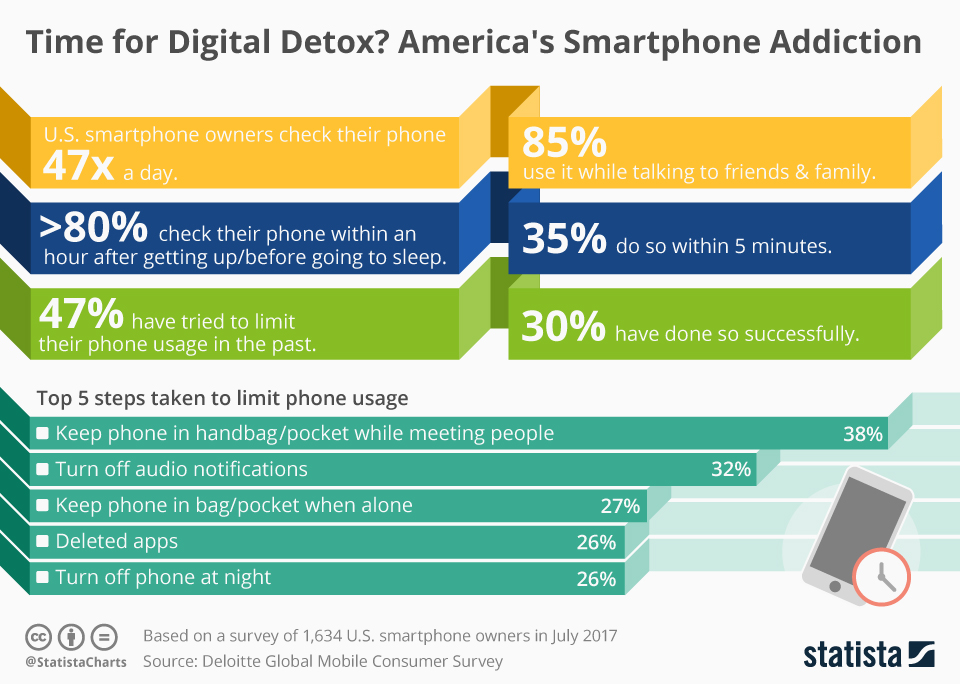 It is no big secret that teens these days have a complex relationship with technology. They are expected to use technology both in and out of the classroom to make their grades, manage their social lives through different apps and social media platforms and use technology to stay organized on top of their many, many activities. Smartphone addiction is not limited to children and teens. In fact, a study suggest that 75.4 percent of adults are addicted to their phones. 65 percent check their phones up to 160 times per day. Adults are also hooked to smartphones for work, social interactions, online gaming, etc. However, social media has become the main culprit for hooking into gadgets. According to a new study, the more parents demonstrate addictive behaviour with smartphones, the more difficulties they also have in regulating their young children’s use of the devices.

77 percent OF U.S. adults say smartphone addiction among their children is a problem.

Related: Why The Millennials vs Gen Z War Is Unhealthy For Planet Earth 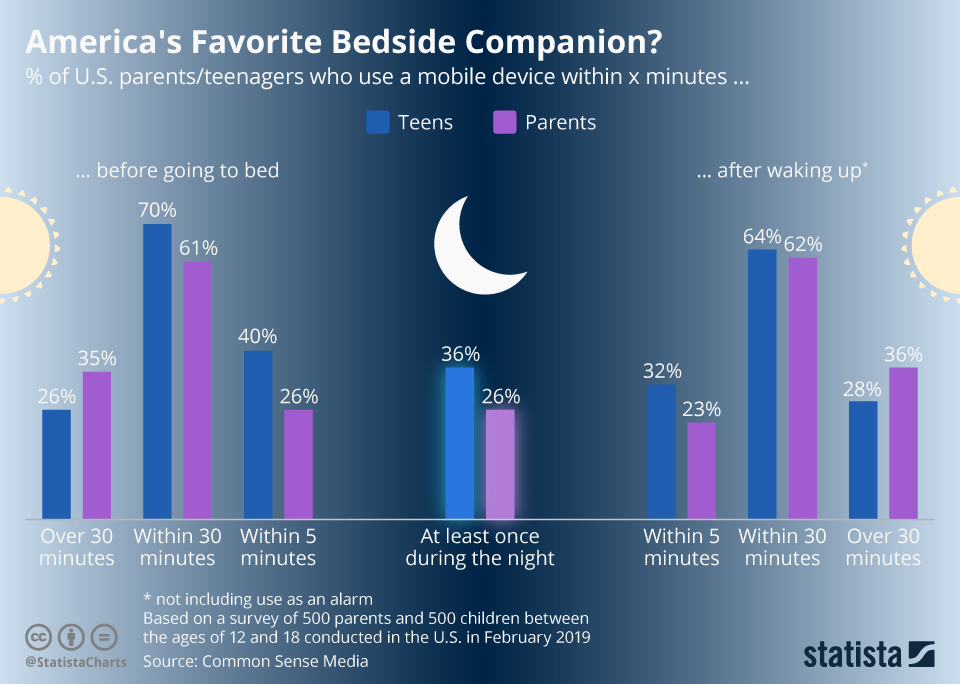 Behavioral Change is the Need of the Hour

High usage often leads to absent-minded behaviour, impatience, and disturbance in the family routine. Some research found a correlation between smartphone addiction and self-disclosure, anxiety, depression, and academic performance. If people are denied constant access, they become panicky and upset. Furthermore, young adults cannot control the amount of time they spend on the phone. Researchers believe that people who compulsively use smartphones may be trying to escape issues in their lives that feel too difficult or complicated to resolve. There is another similarity between behavioral addiction and cell phone overuse: the triggering of a chemical in the brain that reinforces the compulsive behavior. The brain contains several pathways that transmit a feel-good chemical called dopamine when you are in rewarding situations. For many people, social interaction stimulates the release of dopamine.

Watch: How Smartphones take away your Brain’s Ability to Focus

Smartphones are here to stay and there is a need to understand the prevalence of problematic smartphone usage. It is difficult to say whether it is the smartphone itself that can be addictive or the apps that people use. Nevertheless, there is a need for public awareness around smartphone use in children. Young people and parents should be aware of how much time their children spend on their phones. Parents should also learn to disconnect from technology once in a while to become role model for their children.

It is important to empower teens to take control of their own use of smartphones to create and maintain a healthy balance. As parents, we tend to be reactive when we see our children spending a lot of time on their phones and nag them to put it down. But that approach doesn’t teach good long-term habits. You could change your approach in a better way as mentioned below.

Make it a “we” Issue

It is just as hard for parents to dock their phones, and there is a reason for it. Both parents and children alike get a dopamine hit every time their phone pings with the arrival of a notification. It is also known as intermittent response and this is what makes it so habit-forming. Parents can talk about how they can turn off the notifications to help break that habit and take away some of the smartphone’s power to draw them back and show their children how to do the same. 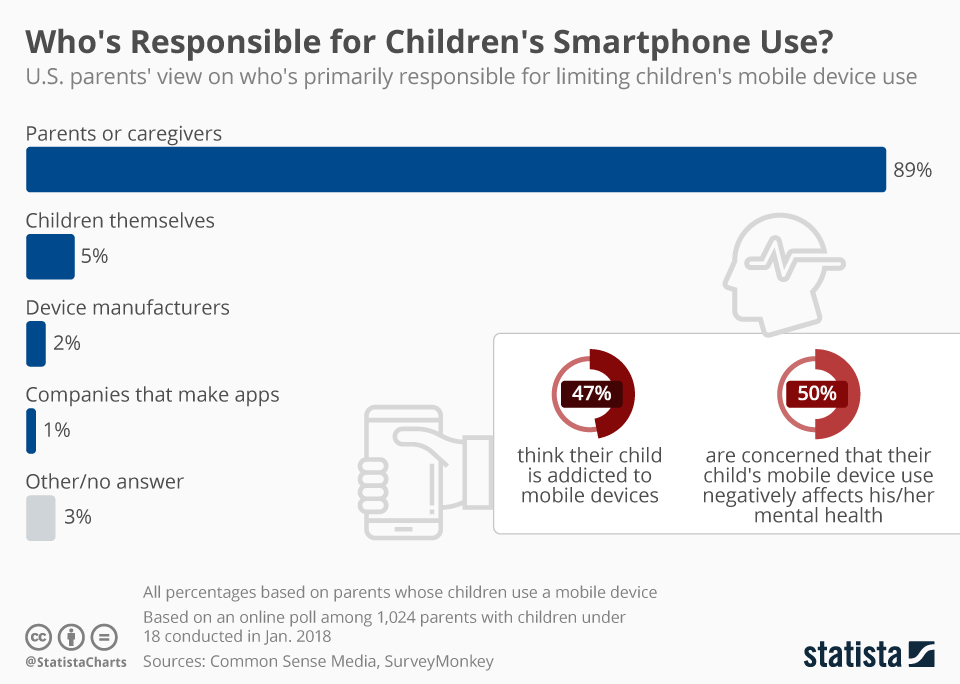 Related: Job Hunting Not Going So Well? Here’s How To Outsmart The Robots Scrutinizing Your Resume

Instead of demonizing technology, talk about the benefits of a smartphone like how it helps with research for school projects or to stay in touch with friends. Then gradually talk about how smartphones can creep into the time we could be spending doing other things we enjoy like hanging out with friends or going skiing, creating a negative impact on other parts of life.

Work with children to choose some appropriate times to use mobile devices, perhaps after completing school work chores, and decide how much time per day is acceptable. Once the terms are set, stick to them and parents should be good role models for children. Many types of research have also shown that having rules in place will make everyone more likely to follow good habits.

To summarize, the recent evidence indicates that smartphone addiction is becoming a serious social problem with psychological and physiological consequences. The number of children addicted to smartphones is growing. The evidence related to smartphone use, depression, parental control, and sleep time requires further investigation.

Crypto Art: What Is It And Why It’s Turning Into The New 'Rich Millennial Fad'