The Free World Is Divided On The Myanmar Coup. Here’s Why

The democracies of the world have condemned the Myanmar coup individually, but failed to do so in unison.

On February 1, 2021 the Myanmar military, also known as the Tatmadaw, launched a military coup to overthrow the democratically elected government led by Aung San Suu Kyi. In the third such instance since the country’s independence in 1948, power was handed over to Commander-in-chief of Myanmar Armed Forces Min Aung Hlaing. The military also announced that Ministers and their Deputies of a number of portfolios, including Finance, Health, Interior and Foreign Affairs had been removed.

Aung San Suu Kyi, State Counsellor and Chairperson and Supremo of the National League for Democracy (NLD) and other leaders of the party were arrested. Suu Kyi, a Nobel Laureate, was the leader of the decades-long pro-democracy power struggle in the country having stayed in detention from 1989 to 2010. Her peaceful resistance was acknowledged globally. On February 3, two days after the military seized power, cases were filed against Suu Kyi for illegally importing, six unregistered walkie-talkie radios and using them without consent.

The reason cited by the Junta, for the coup was alleged electoral fraud committed in the recently held election. Fissures between the Myanmar military and the civilian administration, which were already present, aggravated after the declaration of results of elections held in November 2020. Aung San Suu Kyi’s NLD won a landslide 396 seats out of the 498 it contested. In doing so, the NLD bettered its performance of 2015 by nine seats. On the other hand, the military backed Union Solidarity and Development Party (USDP) fared very poorly securing a paltry 33 seats. The military junta believes there were numerous voting irregularities – arguing that there were 8.6 million such instances. Myanmar’s election commission had dismissed claims of electoral fraud.

Famous commentator and author of numerous books on Myanmar, Thant Myint U had on the eve of the coup commented: ‘Dynamics since the Nov. elections have brought the three decades long contest btw the army and the NLD to a critical juncture. Over the coming days & weeks this relationship, crucial for every that happens next in Myanmar, will unfold in new directions. No business as usual’. In fact, Myanmar’s parliament session had originally been scheduled for Monday, February 1, 2021 but was delayed due to rumors of a possible coup.

Watch: Myanmar State counsellor detained in a coup by Military

Myanmar’s constitution of 2008, drafted by the Tatmadaw, had some crucial weaknesses skewed in favor of the country’s military – first, there is a provision which states that military can capture power during an emergency, second a quarter of seats were reserved for the military with important ministries such as foreign affairs and defense. This provision was important, because there can be no amendment to the constitution without support from 75 percent of lawmakers. Third, the constitution does not guarantee citizenship to all residents of the country.

While reacting to the military coup, United States Secretary of State, Anthony Blinken in a statement said in a Press statement: “The United States expresses grave concern and alarm regarding reports that the Burmese military has detained multiple civilian government leaders, including State Counsellor Aung San Suu Kyi, and civil society leaders,”

US President Joe Biden warned of sanctions against Myanmar, if Democracy was not restored (the transition towards democracy had begun significantly during Obama’s Presidency). Barack Obama had also visited Myanmar in 2012 with an aim towards strengthening the democratic process. Multilateral organizations like the UN, the EU also criticized the coup and expressed their apprehension with regard to its implications. Foreign Ministers of G7 countries (Canada, France, Germany, Italy, Japan, the United Kingdom and the United States of America) in a tweet said: ‘We are deeply concerned by the detention of political leaders and civil society activists, including State Counsellor Aung San Suu Kyi and President Win Myint, and targeting of the media. We call upon the military to immediately end the state of emergency, restore power to the democratically-elected government, to release all those unjustly detained and to respect human rights and the rule of law. The November election results must be respected and Parliament should be convened at the earliest opportunity’

China has been traditionally closer to the Myanmar military. In recent years China’s support for groups like Arakan Army has been well-known. Beijing was cautious in its response to the coup. Chinese Foreign Ministry spokesman Wang Wenbin emphatically dismissed the claim that it had in anyway lent support to the coup. He also expressed hope that all stakeholders would resolve their differences in a constitutional and legal manner and restore stability. China also blocked a statement by the United Nations Security Council (UNSC) which sought to condemn the military coup in Myanmar.

Likewise, India has also been cautious in its response to the Coup, expressing its stand in favor of democracy and the rule of law and also expressed ‘deep concern’ over the events. Yet it will have to work with whoever is in power. New Delhi has both strategic and economic interests in Myanmar which it views as a ‘Gateway to South East Asia’ and an important component of its Act-East Policy. Some of the major infrastructural projects include the India-Myanmar-Thailand Trilateral highway, the Kaladan Multi-modal transit transport network, and the Special Economic Zone at the Sittwe deep-water port. India also intends to work with Bangladesh and Myanmar in resolving the Rohingya Issue.

Myanmar, due to its geographical location, is important for China’s Belt and Road Initiative. Xi Jinping had established a reasonable rapport with Aung San Suu Kyi, best summed up by Thant Myint U in a title of one of his books: Where China meets India: Burma and the New Crossroads of Asia. It would be pertinent to point out, that China is the has become the second biggest foreign investor in Myanmar after Singapore. During Chinese President Xi Jinping’s visit to Myanmar in January 2020, the first after Jiang Zemin’s in 2001, a number of important agreements totaling to 33 were signed for pushing forward the China Myanmar Economic Corridor, an important component of the Belt and Road Initiative. The most significant agreements signed included the Kyaukphyu Special Economic Zone, and Deep Sea Port in the conflict-ridden Rakhine state. Kyaukphyu Deep Sea Port project had to be renegotiated and the cost had to be reduced from US $7.2 Billion to US $1.3 Billion due to domestic pressure. Another important project, the Myitsone Dam, estimated at US $3.6 Billion, has been put on hold due to increasing opposition. 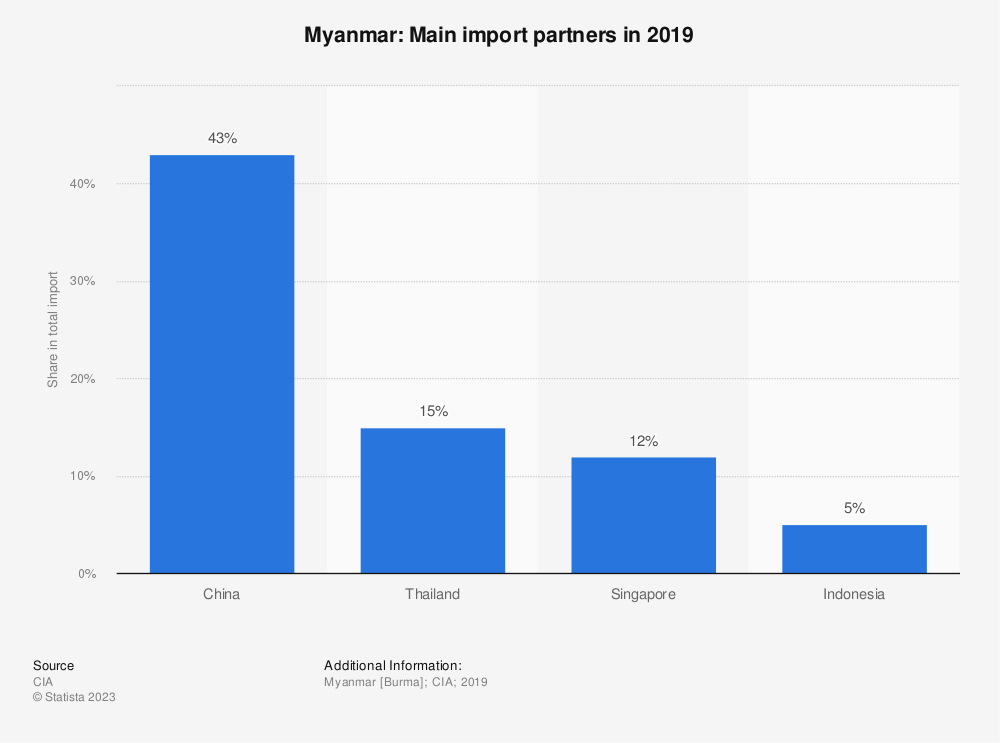 An opinion piece in the Irrawady sums up Myanmar’s strategic and economic relevance for China: ‘By setting up the KDSP, the Chinese are hoping to lower their dependence on the Straits of Malacca, which is China’s main trade artery, linking the Indian and the Pacific oceans. With a new cold war with the United States on the horizon, the Chinese are desperate to reduce their over-reliance on the straits, which are militarily dominated by the US.”

Currently a whopping 80 percent of China’s oil imports pass through the Malacca strait. In recent years there has been a growing apprehension in Myanmar, that it could also fall into a ‘Debt Trap’ but many argue that the ASEAN nation was left with no other option.

Impact on the Rohingya Crisis

Myanmar has veered towards China after being criticized for its handling of the Rohingya Issue by the West. Aung San Suu Kyi, who had been dubbed as a ‘beacon of hope’ by President Obama, disappointed many with her handling of the Rohingya crisis. She even defended the flagrant violation of Human Rights by the military. More than 7,40,000 Rohingyas were compelled to flee burning villages in Myanmar’s Rakhine State. A UN fact finding mission had called for the prosecution of top army officers including Min Aung Hlaing. In a report it also stated: “Myanmar continues to harbour genocidal intent and the Rohingya remain under serious risk of genocide.”

Vice President of the European Parliament, Heidi Hautala, while criticizing the coup also referred to the tarnishing of Aung San Suu Kyi’s image: ‘We won’t forget what she said about the Rohingya people in the International Court of Justice. She has spoiled her international reputation as a human rights defender with her very open support of the military in the genocide issue‘. 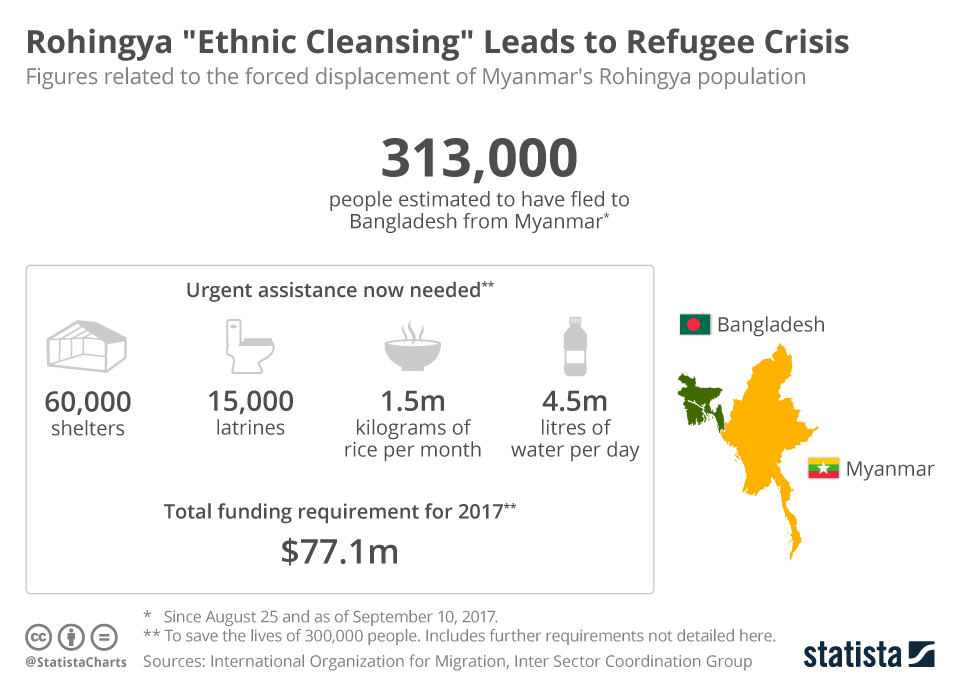 The Trump Administration, which was otherwise not considered vocal on Human Rights Issues, had issued sanctions against Min Aung Hlaing along with other senior military officers including Deputy Commander-in-Chief, Soe Win; Brigadier General, Than Oo; Brigadier General, Aung, for violations not just in the Rakhine Province, but also, in Kachin and Shan states over the past decade. The four officers and their families were barred from visiting the United States.

Economic Impact of the Coup

Myanmar had received commitments of US $5.5 Billion till September 2020 (real estate and manufacturing accounted for 20 percent each of that figure) while the ASEAN nation grew less than two percent in 2020 and six percent in 2021. While there have been mixed reactions to the coup, it has been argued that a lot will depend upon the scope of western sanctions. Also, in terms of FDI, Myanmar receives a bulk of the investment from Asia. In the Infrastructure Sector, the top investors are China (which accounts for 29 percent), India (14 percent) and Japan (11 percent). While Asian countries are likely to be cautious in their reaction to the coup, Western countries are likely to take a stronger stand. Many argue that China may benefit further from such a situation. 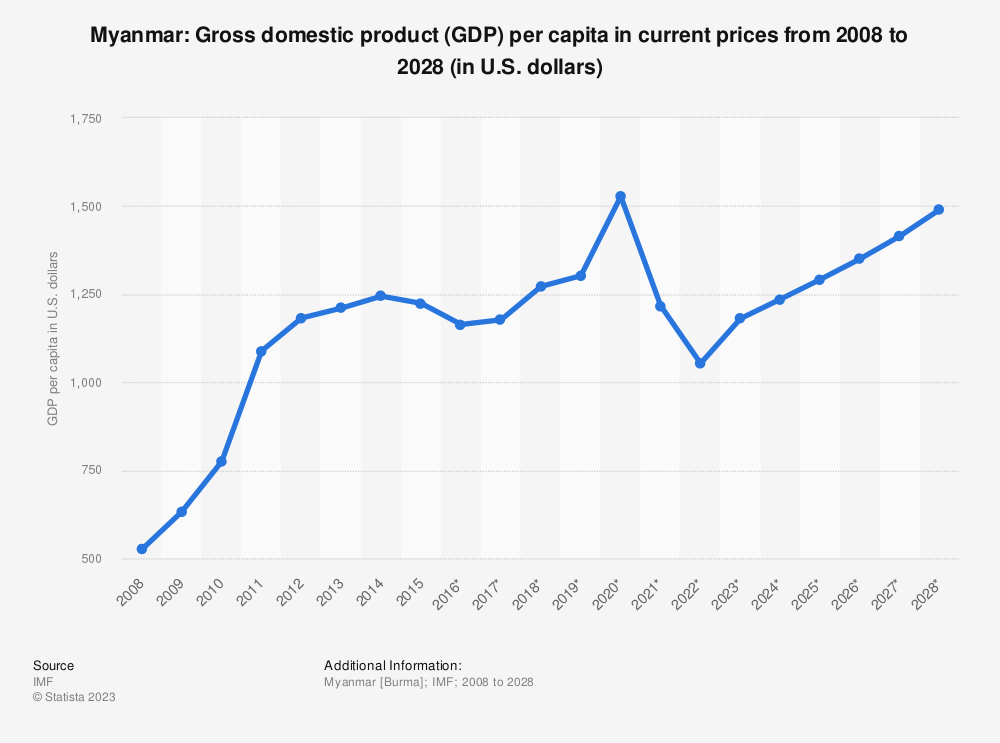 While the US and other western nations are likely to favour economic sanctions, many analysts believe that such a step will only result in Myanmar moving even closer to China. Even US allies in Asia like India, Japan and South Korea, which have economic interests in Myanmar, may not be on the same page as the US with regard to slamming sanctions. In a media interview, Japan’s state minister of defense, Yasuhide Nakayama had stated: ‘If we do not approach this well, Myanmar could grow further away from politically free democratic nations and join the league of China,”

The coup in Myanmar is thus important not just for Asia where countries opposed to China’s increasing dominance in the region need to work together to come up with a joint strategy, but also for the Biden Administration which will have to strike a balance on its firm commitment to democracy and ‘realpolitik’.