The EAGLE Act will now be looking to pave its way through the Senate to be presented in the White House for the president to pass.

The US House of Representatives was tabled with the new bipartisan legislation introduced by Democrat Zoe Lofgren and Republican John Curtis that specifically targets US-based Indians waiting for years to get employment-based Green Cards. The EAGLE Act seeks to eliminate the per-country cap for the Green Cards that now needs to be passed by the Senate before being presented to the White House to be signed by the president to make it a law.

The Equal Access to Green cards for Legal Employment (EAGLE) Act, 2021 has come as delightful news to the Indians living in the US whose fate has been hanging in limbo to get the approval of the residency applications. The Democrat Representatives stated that “This will benefit the US economy by allowing American employers to focus on hiring immigrants based on their merit, not their birthplace”. This bill is going to be beneficial for the Indian job-seekers whose career and future completely lie on temporary visas such as H1B or waiting for Green Cards.

What is EAGLE Act?

A Green Card of a Permanent Resident Card is an official document issued to the immigrants living in the US allowing them to reside in the country permanently and the document acts as an evidence of that. The act which was introduced in the mid-20th century is aiming to phase out the per-country cap that is right now limited to only seven percent on the employment-based immigrant visas. If the act becomes the law, then the per-country cap will be raised to 15 percent that would offer for nine years for excluding this limit. The seven percent limit has only benefitted the country that has a comparatively small population than the countries with a larger population.

The act that is seeking to “de-emphasize birthplace” also mentioned that “A person from a large-population country with extraordinary qualifications who could contribute greatly to our economy and create jobs waits behind a person with lesser qualifications from a smaller country”.

A terrifying backlog for Green Cards

It is no surprise to those who look forward to settling their life in the US already considering the fact that the queue for the Green Card is going to be humongous. Especially for Indians working in the US, the Green Card backlogs and immigration queues are never-ending. According to the data provided by the US Citizenship and Immigration Services (USCIS), the backlog for employment-based green cards exceeded over 1.2 million applicants in the fiscal year 2020 which has been recorded as the highest number till now. Though a few numbers of green cards were approved in the fiscal year 2021, it did not reduce the wait times for it. 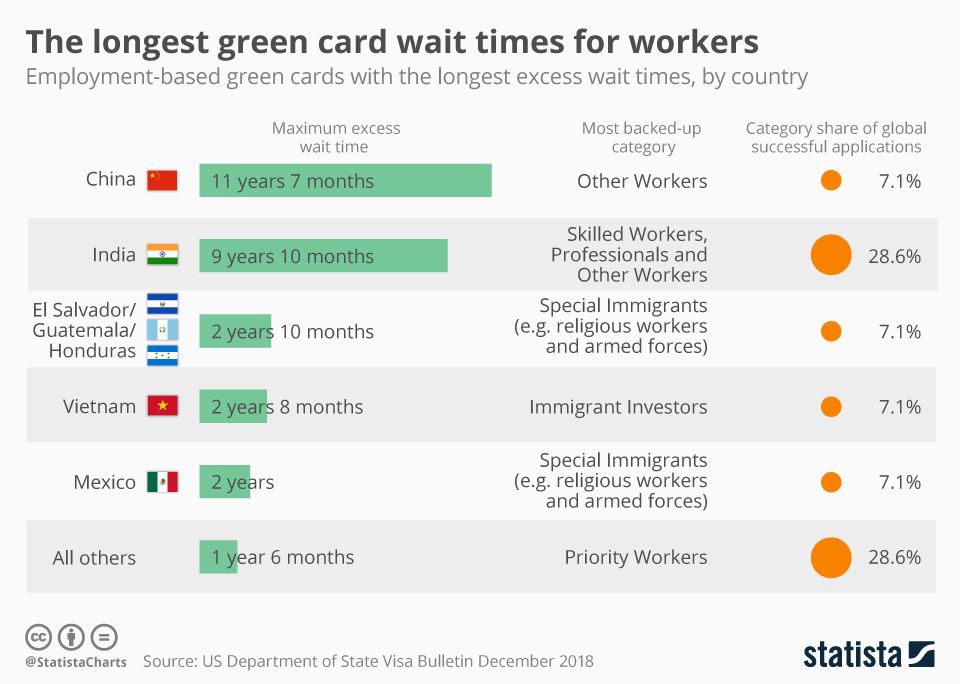 In July 2019, the House of Representatives had passed the Fairness for High-Skilled Immigrants Act (HR1044) which is the predecessor to the EAGLE Act. And the bill was also seeking to remove the seven percent per-country cap on the employee-backed immigrant visas. Another version of the bill was also passed by the Senate in its 116th session of the Congress but the legislation was declared as a failure as the two versions were not merged before the end of the session. But with the EAGLE Act, there are no such versions of it that would turn out to be a failure.

Related: Is Trump Planning Another Coup To Win Back Presidency?

How will EAGLE Act help Indians?

Right now, the workers falling under the EB2 category are facing the biggest backlog with a wait time of 151 years. And the majority of the workers are Indians in this category. If the bill passes and becomes the law, then it is going to be a positive win-win situation for the Indians living there. Right now as of May 2018 data from USCIS 308,601 Indian candidates were in line for the petition to be approved. And the overall backlog has always comprised of 75 percent of applicants being Indians.

The Act will remove the per-country cap, and this would help in accelerating the petitions for the Indians applying for the employment-based Green Cards. The bill also states that no country will be eligible to receive over 25 percent of the reserved visas and 85 percent of unreserved visas in the nine fiscal years.

Indians are the second-largest immigrant group after Mexicans with over 2.7 million living in the US as of 2019. If the EAGLE Act makes its way through the Senate and gets signed by the president, it would come as a delight and relief to the Indians who are spending their days living in insecurity.

Education: Master of Journalism and Mass Communication, Maharashtra Institute of Technology, Pune. Along with coffee, writing is a vital part of Mrunmayi’s life. With 5 years of experience in various fields of media right from print to digital, Mrunmayi has tried her hands on almost every beat and still searching for new ways to keep up with the changing world. She is also a certified yoga instructor, and you will find her indulged in meditation sessions during her free time.