The actual number of people who have succumbed to the novel coronavirus worldwide exceeds the reported deaths by an estimated 113 percent.

As India’s crematoriums and burial grounds overflow with dead bodies amid a sweeping second wave of coronavirus infections, the mismatched government figures on the death toll are making it apparent that the country is underreporting its COVID-19 fatalities. Now, an analysis by the Institute for Health Metrics and Evaluation (IHME) at the University of Washington School of Medicine has found that this trend is not unique to India. COVID-19 deaths are being significantly played down in almost every country.

The IHME estimates that the actual COVID-19 deaths in India are nearly three times higher than the official figures. The situation is not very different in countries like Mexico and Russia. In Mexico, the death toll is a staggering 180 percent higher than the reported number whereas Russia is suspected to have had 5.5 times more fatalities than reported.

The US and Brazil – the two countries that have been hardest hit right from the beginning – have fared somewhat better, with actual deaths estimated to be about 50 percent more than the reported numbers. Globally, the actual number of people who have succumbed to the novel coronavirus exceeds the reported deaths by an estimated 113 percent. For the official global COVID death toll of 3,499,942 on May 26, 2021, the number of deaths that went unreported stands at approximately 3,954,934.

Related: Treating Your Mask Like A Fashion Accessory Could Be Fatal

The Cause of COVID-related Underreporting

Several factors contribute to underreporting of COVID-related deaths across countries. For starters, there is no standardized procedure for attributing novel coronavirus as a cause of death. The World Health Organization guidelines on the matter are generic at best, stating that COVID-19 is to be listed as the cause of death in probable or confirmed cases “unless there is a clear alternative cause of death that cannot be related”.

As a result, the practices for attributing COVID-19 as the cause of death vary not only from country to country but also across states and cities within each country. In many instances, it comes down to doctors, medical examiners or even coroners to take a call on whether or not COVID should be mentioned as the primary cause on the death certificate.

There is no standardized procedure for attributing COVID-19 as cause of death. The WHO guidelines on the matter are generic at best.

Given the evidence of myriad health complications arising due to contracting the coronavirus, this can be a problematic trend. In India, for instance, there have been clear discrepancies between how state governments and crematoriums classify deaths. And in a majority of cases, the cause of death is not even certified. 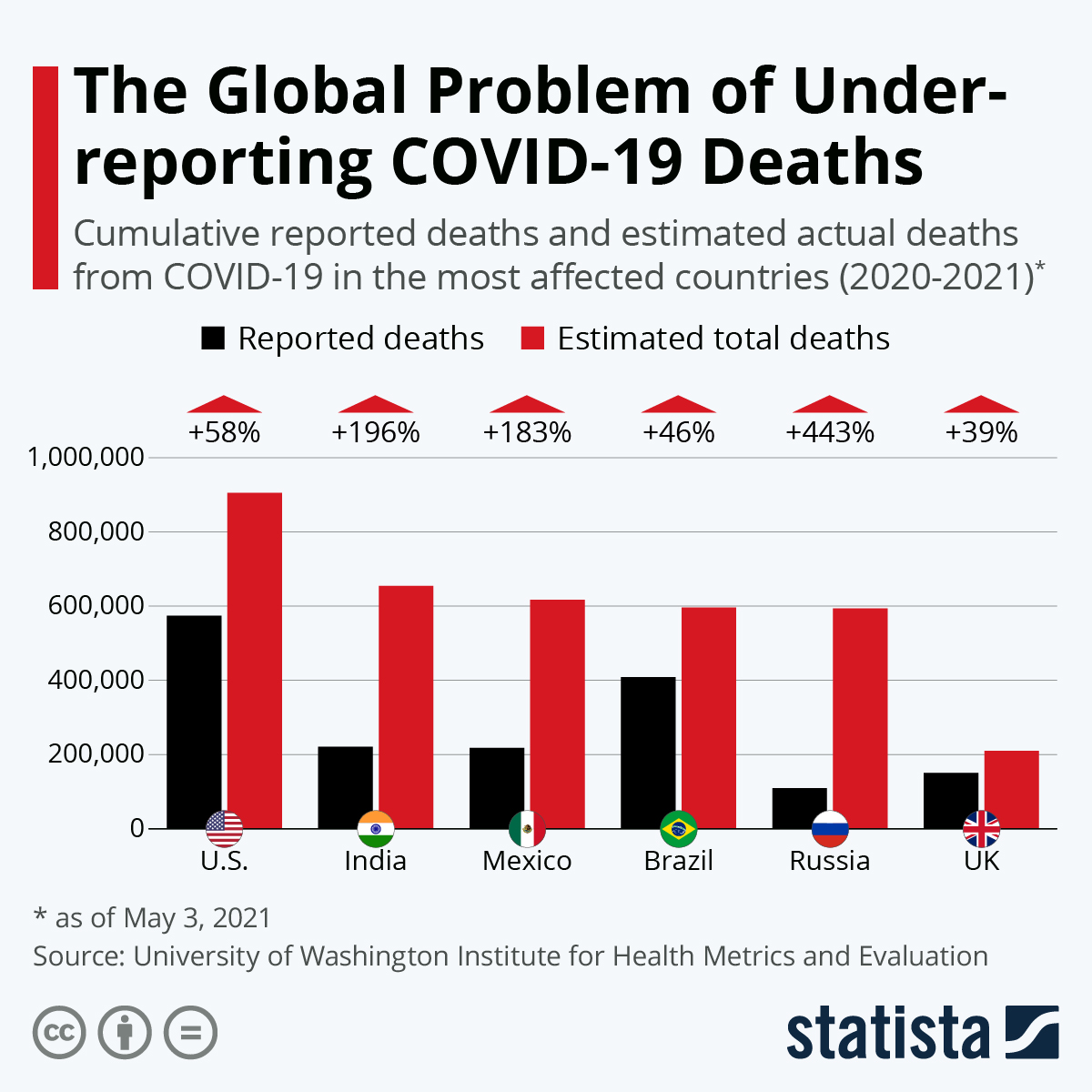 Take, for example, The Hindu report that states 700 bodies were buried or cremated as per COVID protocols across seven cities of Gujarat on April 16 alone whereas the official death figure for the entire state on the day was 78. Similarly, a Times of India report curated from local reports from different parts of the country shows that the actual death toll exceeds the official figures 24 times.

One of the key factors for such discrepancies is that pre-existing comorbidities or cardiac arrest are often listed as the cause of death even for patients who were undergoing treatment in COVID wards. Those who lost their lives awaiting hospitalization during India’s second wave remain as forgotten in death as they were in life. Although, if counted, they’d likely add up to a sizeable number, their deaths do not make government lists or statistics.

On similar lines, the counting method used by the task force in Russia has drawn heavy criticism for including only those cases where COVID-19 was determined to be the primary cause of death, resulting in acute underreporting. Although the CDC in the US has issued guidelines to account for deaths in both probable and confirmed COVID-19 cases, accuracy in counting in practice has been far from streamlined. Florida Governor Ron DeSantis, for example, allegedly pressured the medical examiners in the state to not release exact data on COVID-related deaths whereas New York Governor Andrew Cuomo drew flak for his attempts to obscure COVID deaths among nursing home residents.

Underreporting can also be attributed to the fact that many countries only report deaths that occur in hospitals or patients with a confirmed infection. In many places, the challenge of getting the accurate number of deaths is augmented by factors such as weak health reporting systems, lack of testing in deaths outside hospitals, and low access to healthcare.

Why Underreporting is a Dangerous Trend?

Downplaying the death toll, either by design or due to pure lack of means to assess the real extent of fatalities, can have a direct bearing on a country’s pandemic response and policy. Low death count can be misinterpreted as a relatively low threat indicator, causing laxity both at government and individual levels – from failure to direct requisite resources and funding to lack of adherence to social distancing and mask-wearing. This can drive up caseload exponentially – the seemingly sudden outbreak of the second coronavirus wave in India is a fitting example.

Low death count can be misinterpreted as a relatively low threat indicator, causing laxity both at government and individual level. This can drive up caseload exponentially.

Given the limited testing capacities in many parts of the world, mortality numbers can serve as a better indicator for the extent of COVID-19 spread. Besides, an accurate tally of fatalities can prove critical for scientists to fully understand and analyze the behavior of the virus (that keeps altering with every mutation) and its impact on people’s health.