The U.S. will donate 75% of its vaccine surplus which will be distributed globally to fill the availability gap in second and third world countries.

After successfully vaccinating more than half of the U.S. population, US President Joe Biden is now planning to distribute 80 million doses of COVID-19 vaccines to the rest of the world by the end of June. The decision comes under the purview of the United Nations COVAX program and aims at dispatching doses to countries in Central and South America, Asia, and Africa to help bridge the vaccine shortage outside the United States.

Under the COVAX global vaccine sharing program, President Biden assured that the U.S. will donate 75% of its vaccine surplus which will be distributed globally to fill the vaccine availability gap in the second and third world countries. To date, the UN-backed COVAX program has only shared 76 million doses of vaccine with countries in need. These doses of vaccine said to be distributed by June end, come from the federal stockpile of Pfizer, BioNTech, Moderna, and Johnson & Johnson.

Which countries will benefit from the COVAX Program?

As part of the plan, the U.S. is donating 19 million of its surplus vaccines to the COVAX whose first stage dispatch will amount to 25 million vaccines. Out of these 25 million doses, the largest share is set aside for Asia at 7 million, followed by 6 million doses for Central and South America and 5 million for Africa.

6 million of the remaining doses from the first tranche are set out to be shared with the partners and allies of the U.S. These countries are India, Mexico, Canada, South Korea, West Bank and Gaza, Ukraine, Kosovo, Haiti, Georgia, Egypt, Jordan, Iraq, and Yemen, along with the United Nations frontline workers.

Plenty of countries had requested the U.S. to dispatch vaccine before the announcement came in. However, it was only Canada and Mexico who have received 4.5 million doses in quantity.

Announcement on Thursday also said that the country is lifting restrictions from the export of AstraZeneca, Sanofi and Novavax. The choice of where to export for these companies, will be independent and not determined by the federal government.

The U.S. is committed to delivering 60 million doses of the AstraZeneca vaccine to other nations. AstraZeneca is yet to receive a green signal from medical authorities unlike other most of the countries globally where the vaccine has been approved by regulatory authorities. These 60 million doses are currently held by the Food and Drug Administration for safety review before exporting to different countries.

“As long as this pandemic is raging anywhere in the world, the American people will still be vulnerable,”

President Biden said in a statement. “And the United States is committed to bringing the same urgency to international vaccination efforts that we have demonstrated at home.”

Apart from distributing 80 million doses to the world by end of June, the Biden administration plans to retain 25% of the stock for internal emergencies and to share with allies. In a statement, Jake Sullivan, U.S. National Security Adviser, said that the country will “retain the say” as to which countries will recieve the doses under the COVAX program. 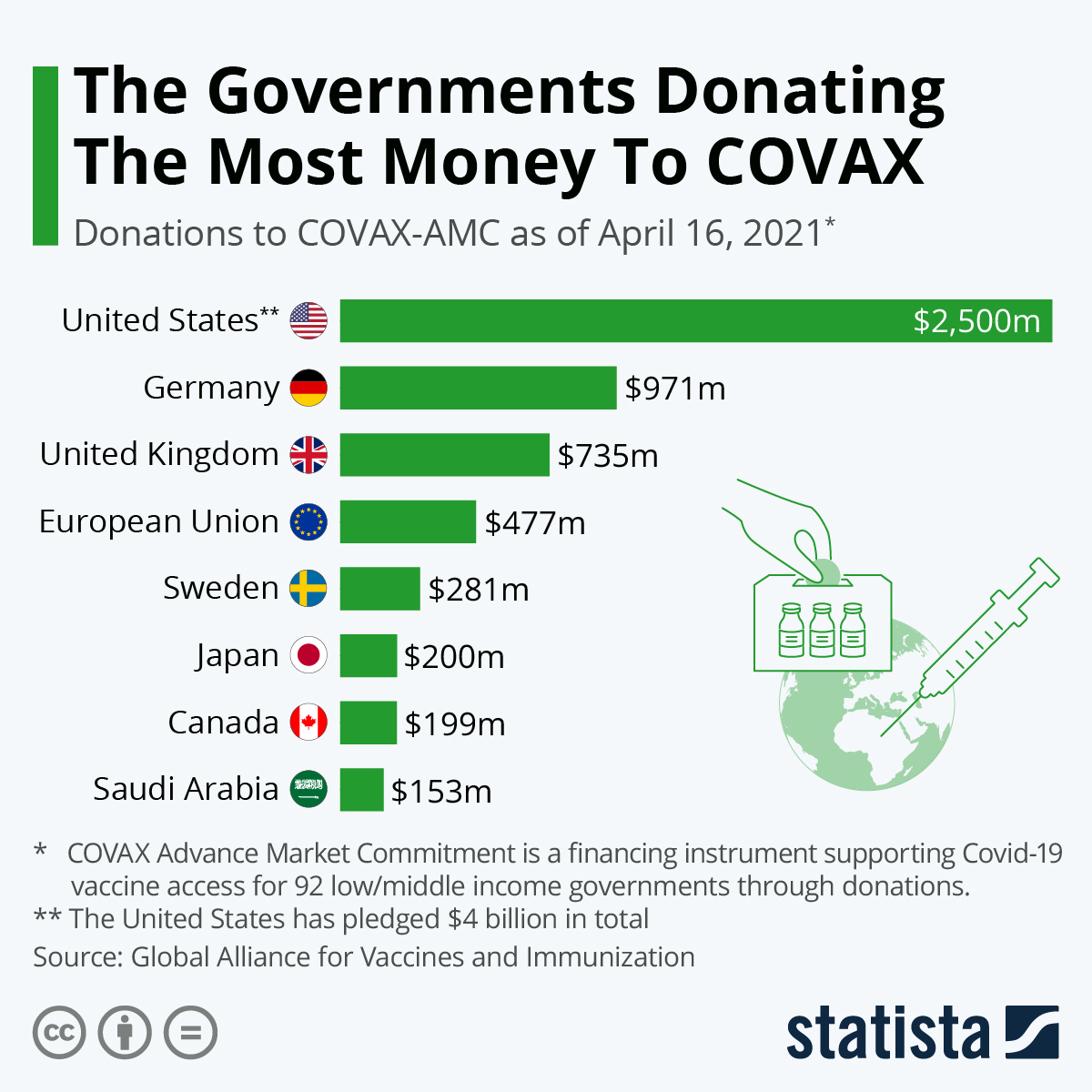 “We’re not seeking to extract concessions, we’re not extorting, we’re not imposing conditions the way that other countries who are providing doses are doing; we’re doing none of those things,” said Sullivan. “These are doses that are being given, donated free and clear to these countries, for the sole purpose of improving the public health situation and helping end the pandemic.”

Biden’s tool to overtake Russia and China in the vaccine diplomacy battle?

The plan of the vaccine distribution by the end of June is yet to be announced. However, U.S. Secretary of State Antony Blinken made it clear that the distribution of vaccines globally will not be influenced by the political gains in the process but the equitable distribution of healthcare.

“Sometime in the next week to two weeks – we will be announcing the process by which we will distribute those vaccines, what the criteria are, how we will do it. We will distribute vaccines without the political requirements of those receiving them,” said Blinken, during his visit to Latin America.

Biden plan to boost the COVAX program is a driving tool by the United States to outperform China and Russia in vaccine diplomacy.

Vaccine diplomacy goes much deeper than China and Russia speak of it. Beijing has already shared more than 240 million doses of COVID-19 vaccines with the world and has further committed to take the number to 500 million, according to Airfinity. These distributions don’t only account for first-world countries, but also the ones who are not in a position to pay China for the massive vaccine supply. So what are they paying in return? Political favors and international cooperation.

In Algeria, the leadership didn’t pay a single penny for the vaccine supply from Beijing, instead, pledged to support the country’s “core interests” and criticize the interference from foreign voices in its “internal affairs”. These affairs can be anything ranging from human rights abuse in Xinjiang to autonomy in Hong Kong.

A similar story unfolds in Russia, where in return for vaccine supplies to countries like Bolivia, Putin is planning nuclear cooperation and mineral mining. To quote Shannon, administrative official to Bush, Obama and Trump administration, and Ambassador to Brazil from 2010-13, on the failure of U.S. to accelerate its vaccine distribution to the world, “the world will realize we’re not a reliable partner, and that would be dangerous for us,” he said. “I believe it’s something that will be remembered.”

However, better late than never, President Biden has realized the need to leverage soft power of vaccine diplomacy, especially due to the increasing reach of adversaries China and Russia. It is now to see how the COVAX program will turn out to be for the “global leader” position of the United States.

Tiger Woods Rehab Update: How Soon Will The GOAT Return To Golf