Biden put a hold on the Trump initiated weapons sale to Saudi Arabia and the UAE after disagreements amongst Democrats vis-à-vis foreign policy approach towards the Middle East and the GCC.

The Biden administration announced on Wednesday January 21, 2020, that it had put a temporary pause on arms sales to the United Arab Emirates (UAE) and Saudi Arabia. The Trump Administration signed an agreement with the UAE to sell 50 F-35 combat jets, 18 armed drones and other defense equipment to the tune of over $20 Billion hours before Joe Biden was sworn in as President. This was the largest defense deal between the US and the UAE and had been announced after the signing of the Abraham Accords through which Bahrain and the UAE had normalized relations with Israel as a result of US mediation.

One of the reasons cited for the sale to the UAE was to counter the threats and aggression from Iran. The agreement drew fervent opposition from both Democrats and Republicans. Senators from both parties had introduced a legislation to block the deal and had accused the Trump administration of ignoring the arms export control act. A New York based think tank has also challenged the deal via a law suit.

Former US President, Donald Trump had lauded the sale ‘beautiful’ American weapons to Saudi Arabia. In fact, Trump had declared a national emergency in 2019 to bypass the need for Constitutional Review before the sale of arms to both GCC countries. The then Secretary of State Mike Pompeo while commenting on the decision of the administration had said, “These sales will support our allies, enhance Middle East stability, and help these nations to deter and defend themselves from the Islamic Republic of Iran.” 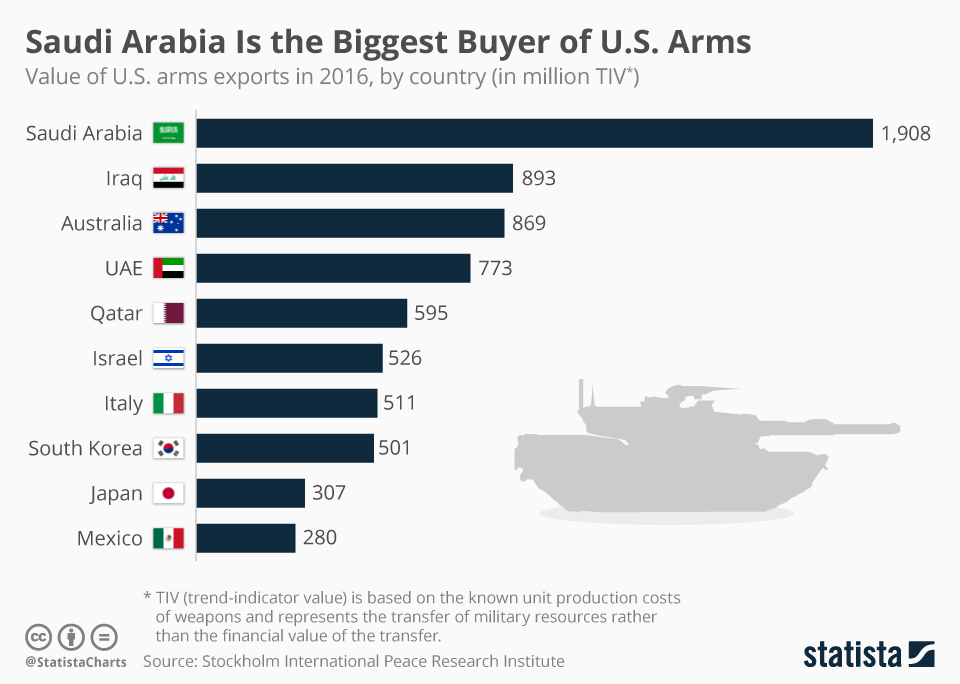 The Trump administration had also approved the sale of precision bombs, estimated at $500 million, manufactured by Raytheon. After the Biden Administration took over, the CEO of Raytheon is understood to have told investors that this deal is likely to be reversed. The firm has removed its $149 million sale of a “precision-guided munition’.

Secretary of State, Anthony Blinken, while commenting on the decision to review arms deals with UAE and Saudi Arabia made the point that, “It is typical at the start of an administration to review any pending sales to make sure that what is being considered is something that advances our strategic objectives and advances our foreign policy, so that’s what we’re doing at this moment.”

The sale of arms to both countries, especially Saudi Arabia, had faced fervent opposition from a number of policy makers due to their role in the Yemen civil war. Ten Democrat Congressmen have already written to Blinken to review the sale of arms to Saudi Arabia, stating that the US policy vis-à-vis Saudi Arabia needed a re-think, and that the former must give precedence to its own interests, and hold Riyadh accountable for actions which are detrimental to US interests and go against the values which the US stands for. In the past, Biden had made it clear that the US would reassess its relations with Saudi Arabia and in the past he had even dubbed it as a ‘pariah state’, saying that Saudis were responsible for the murder of innocent civilians in Yemen.

In a letter, the ten Democrat policymakers have also urged the Biden administration to look at a number of other issues pertaining to Saudi Arabia’s Human Rights record as well as geo-political interests. These include demanding accountability from the Saudis for the murder of journalist Jamal Khashoggi, releasing of an unclassified intelligence agency report which holds the Saudi Government responsible, and the reversal of Trump’s decision to name Houthis as a terrorist group.

Shift in Foreign Policy and the Iranian factor at play

While a number of observers had pointed out that Biden’s approach towards the GCC would be different from Trump’s, it is premature to link the decision of review of arms deals with the UAE and Saudi Arabia as an indicator of a major foreign policy shift. In fact, the UAE was cautious in its reaction to the decision, though it did make it clear that the deal does not benefit only the UAE, but also enables the ‘UAE to take on’ more of the regional burden for collective security, freeing US assets for other global challenges, a long-time bipartisan US priority.”

As far as Saudi Arabia is concerned, the decision to review arms deals cannot be ignored, because Blinken on his first day at work had been categorical in stating that the US would end the support for the military campaign in Yemen. Blinken also referred to Saudi campaign in Yemen dubbing it a major humanitarian crisis. While many may believe that this decision to review sales of arms to two GCC states may be an indirect overture towards Iran, which is at loggerheads with the UAE and Saudi Arabia, Blinken clearly indicated that while the US is keen to return to the Iran Nuclear deal, the gulf state will need to comply with the conditions before sanctions against it could be removed. On the other hand, Tehran has been demanding an unconditional removal of sanctions.

Moreover, this decision is not just important in the context of the US-Saudi bilateral ties but also because it compels American ally the UK to rethink its approach of arms sales towards Saudi Arabia. The UK is the second largest supplier of arms to Saudi Arabia and it may need to do a rethink especially with regard to British equipment tied to American licensing agreements.

The move is significant not just in the context of the US approach vis-à-vis the Middle East, especially the Gulf, but also reiterates the ‘values’ vs ‘interests’ debate in International Relations. Not only is Saudi Arabia strategically relevant for the US, but many American corporates too have significant economic interests in Saudi Arabia. In his bid to woo economic investors, crown prince Mohammad Bin Salman who shared a close rapport with Trump had started the Future Investment Initiative Institute, a Saudi financial forum often dubbed as ‘Davos in the Desert’. This annual investment forum began in 2017 and in the recent FII, big names like David Solomon of Goldman Sachs, Thomas Gottstein of Credit Suisse and James Gorman of Morgan Stanley attended the event virtually.

Given the complex geo-politics of the Middle East, it is tough to make any predictions while the temporary hold on arms sales to UAE and Saudi Arabia cannot be overlooked and is important in terms of symbolism. However, it is the overall politics of the Middle East and mutual interests of Washington and Saudi Arabia and UAE which will ultimately determine the relationship – though it is evident that the US under Biden will be certainly less transactional than Trump.

Early Outlook: What Biden's Presidency Means For The Indian Economy

Biden's Stimulus: What Benefits The Average Joe And What Pretends To