From the look of things, it appears that the time for worker unionization in the United States is well on its way, and is traveling fast, even if it has not arrived quite yet.

The US economy has been doing differently well for different people for a long time now, a trend hardly surprising because prosperity, like misery, is almost never uniform. However, the differential between the rates of growth of incomes between different classes of people has been nothing short of staggering with the income of the bottom half growing by one percent as compared to the 205 percent growth for the top one percent between 1980 and 2014. There are a number of factors that went into the making of that differential, but among the most prominent ones is the policy choices made by the United States to take away from the workers “the power to stand together and bargain for fairer wages,” and as much has been admitted by at least a few sections in the corridors of power together with the fact that the “inequality, stagnation, and instability for so many is not a natural product of a functioning economy.” It is in this broader context that the historic attempt by the workers of Amazon’s warehouse in Bessemer, Alabama to unionize must be seen, for if the vote goes in favor of unionization, it would be the first time that Amazon’s US employees will have unionized.

With the National Labor Relations Board’s rejection of Amazon’s bid to delay the vote to determine whether or not Amazon’s Alabama warehouse, called “BHM1”, would unionize and join Retail, Wholesale and Department Store Union (RWDSU), the final roadblock to the process was removed and the mail-in voting process was greenlighted to begin on February 8, 2021, bringing the workers one step closer to a possible unionization.

Watch: Amazon Alabama workers to vote on Historic Unionization in US

It is not the first time that Amazon’s US workers have tried to unionize. A smaller group of maintenance workers of the Delaware warehouse did manage to push it as far as a union election in 2014, but the effort was successfully fought down by Amazon’s aggressive anti-union campaign with the workers voting against it 21 to 6. It remains to be seen whether BHM1 would do any better than the Delaware warehouse workers at unionization because Jeff Bezos’ Amazon is doing everything it can to eke out the same outcome.

Like in 2014, Amazon is fighting unionization tooth and nail with its “#DoItWithoutDues” campaign together with the compulsory weekly meetings wherein the unionizing initiative is discouraged. The warehouse has anti-union flyers anywhere you look and the workers get bombarded with text messages discouraging them from voting for unionization. The company never fails to emphasize its “high wages” with the minimum hourly wages at $15.30 alongside the health benefits and safe work environment.

In fact, Amazon has been so wary of unionization that it went ahead and tried to hire intelligence analysts to keep close tabs on, among other things, “labor organizing threats against the company.” Although the company claimed that the jobs were advertised “in error”, the claim failed to convince anybody, especially in the light of the digital material left behind by the company on the internet.

Amazon’s spokeswoman Heather Knox claims that the company is educating its employees on what it could mean for them to join a potential union, which, according to Amazon, would cost $500 in dues to a full-time worker, which is what “#DoItWithoutDues” refers to. She told the BBC that the RWDSU does not represent “the majority of our employees’ views”, adding further: “Our employees choose to work at Amazon because we offer some of the best jobs available everywhere we hire, and we encourage anyone to compare our total compensation package, health benefits, and workplace environment to any other company with similar jobs.”

The Flipside – The Workers’ Angst

While Amazon’s claims that employee benefits and the minimum wages at $15 an hour exceed industry averages are true, it’s not higher wages but a more humane, and not just safe, environment that the workers have been demanding. They have long complained of the robotic pace of work that the company expects and demands, and also enforces through its automatically enforced “productivity matrix”, which is a system of tracking that watches and records the work done as well as “time off task”, or “TOT” for short. Everything that a worker does except doing what he is supposed to do on the job like a robot is TOT, including going to the washroom and taking a breather. After a thirty-minute TOT, one gets an automated writeup, and a two-hour TOT gets one automatically fired.

A worker at the BHM1 told The Verge that as a “picker”, the one who takes products off the shelves to scan and send them to be packaged and shipped, he has to scan an item about every ten seconds the entire day like a machine, or be penalized for lapses, which means, to quote him, “you don’t have time to step back.” The attempt to unionize is, to put it simply, driven by the desire to have humane working conditions wherein a worker has the time to stretch a bit and “step back” a little, which is the same as having a healthy and productive work environment. 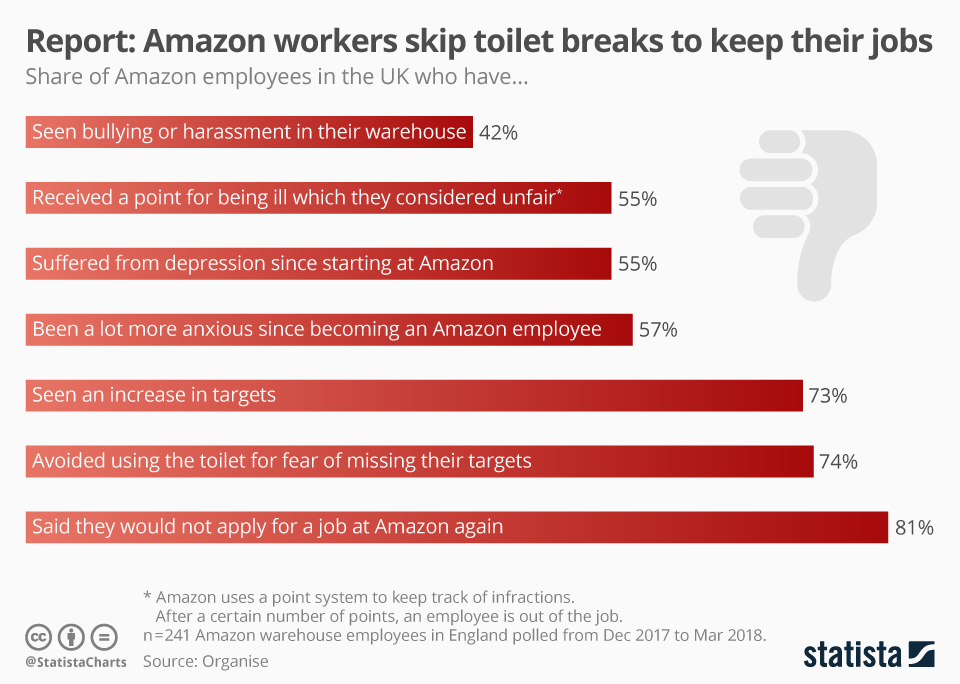 A Reveal investigation published in September 2020 found that the injury rate at Amazon warehouses in 2019 was nearly double the industry average at 7.7 percent, which, together with things like TOT, can well explain the high attrition rate at Amazon warehouses. A 2020 study conducted by the National Employment Law Project found that the attrition rate was 100.9 percent in 2017 in the counties with Amazon warehouses, which is surprising because it means more workers left the warehouses workforce than joined, whereas in 2011 before Amazon opened its warehouses in California, the turnover rate was way down at 38.1 percent. Amazon maintains, without giving any figures to support the claim, that its turnover rate is on a par with the industry average.

In 2017, more workers left the Amazon warehouses workforce than joined.

Can Alabama Do What Delaware Couldn’t?

Yes, it can, for a lot has changed since 2014, especially in the Covid-19 and Black Lives Matter world of today, and also because BHM1 is different from the Delaware facility in many ways. While the pandemic raged and beleaguered the world, Amazon’s profits soared on the wings of increased reliance on e-commerce in the testing times with Amazon’s CEO, Jeff Bezos, adding some $70 billion to his personal fortune in 2020, according to Bloomberg.

The $2-per-hour pay increase for the warehouse workers introduced in March continued only until June 2020, which was just when the number of Covid-19 cases in Alabama began to rise. While the risk heightened, Amazon failed to respond quickly and adequately, resulting in dissatisfaction among the workers and consequent complaints. In Italy and Germany, Amazon faced strikes by the workers, and in France and Spain, the workers unions took it up with the authorities, calling for state intervention.

What could effectively defeat Amazon’s anti-unionization efforts is that the workers at Bessemer, Alabama facility (BHM1) are predominantly black (over 80% of them) with a majority of them being women, which seems to have made the RWDSU position unionization bid in the framework of civil rights. That the union has had Black leadership since its very inception in the 1930s and has been at the forefront of the fight for equal rights for the people of colour did not hurt the cause either. And then the Black Lives Matter protests in the wake of George Floyd’s killing galvanized the workers, fitting well into the civil rights angle RWDSU had given to the unionization bid. Clearly, Amazon is facing a tougher unionization challenge in Alabama than it has faced anywhere in the US ever before, and this time it might be harder to beat it, given the changing circumstances.

What is making Amazon nervous about the BHM1 union vote is the precedent the unionization could set and the consequences of thereof, for studies such as the one conducted at Princeton have found that unions are good for wage boost and “the rise in income inequality between skilled and unskilled workers since the 1970s might be due, at least in part, to a decline in union membership.” In view of such studies, the Protecting the Right to Organize (PRO) Act, which was earlier introduced by the House and Senate Democrats in February 2019, has been reintroduced in February 2021, and this time around it has the support of the President. It has been duly noted that the studies have found that “union members earn on average 19 percent more than those with similar education, occupation, and experience in a non-union workplace.”

While the Bill is still likely to face stiff resistance, it does appear that the time for worker unionization in the US is well on its way, and is traveling fast, even if it has not arrived quite yet.