Acquitted Again, Trump Is Still The Most Powerful Politician In The US

With the impeachment trial over, the biggest hurdle in Trump’s road to White House 2024 has been removed.

Donald Trump once again got a green flag from the Senate for an impeachable offence. With a 57-43 vote in the Senate, the impeachment trial lasted for five days and Trump was finally acquitted after the two-thirds majority fell short of 10 votes. Unlike voting in the House where 10 Republicans voted to convict the President, only 7 came forward this time to convict Trump for the violence that killed 5 people. After the decision came in, the Speaker of the House Nancy Pelosi condemned the result as dishonourable to the nation.

One of the most dishonorable acts in our nation’s history.

The prosecutors, comprising of nine officials of House Democrats called Impeachment Managers, presented video and audio evidences of the insurrection during the trial that continued for two days. Despite creating legitimate anecdotes between the evidences and former president’s role in inciting violence, the committee fell short of 10 votes to bar Donald Trump from holding the Oval Office ever again.

It is not a usual charge against any political official facing impeachment. A president provoking masses to take up arms against the state and thus inciting riots that eventually led to five casualties is a direct strike three. If the man can survive impeachment for that grave an offence, especially in a country felicitated as the watchdog of democracy and leader of the free world, there isn’t much that can unsettle Trump.

Trump remains the most powerful – a truth that can be gauged by the fact that Republican politicians who voted in favor of convicting the former US president as guilty of the insurrection charges are now facing a tough time in their own party. These representatives are facing prospects of censorship from the GOP for voting against Trump in the House.

One of the seven Republicans who voted in favor of impeachment was Senator Richard Burr who is censured by the State Republican leaders in North Carolina. Burr isn’t planning to run for elections again in 2022 and therefore, chose to stand for democratic good instead of abiding by the wrongdoing of his party. Burr said expressing his disappointment after the censure, “My party’s leadership has chosen loyalty to one man over the core principles of the Republican Party and the founders of our great nation.”

Not just Burr, but other Republican Senators as well are being rebuked after the trial for voting against Trump. Republican leaders in Louisiana held voting on Saturday to censure Senator Bill Cassidy for the same reason as Burr. Senator Pat Toomey is facing the same treatment from the Pennsylvanian Republican leaders. Similar voting to censure Senator Susan Collins occurred in Maine to punish her for voting against Trump. Out of all these, Senator Toomey has already been censured by a large number of Republicans nationwide. This happened before the voting took place. But this is not all.

Republican leader Liz Cheney already faced severe backlash for voting against Trump in the House, so much that her colleagues asked for her removal from office. Likewise, Representative Adam Kinzinger of Illinois was rebuked by his own family for being a vocal critic against Trump. In a letter printed by NYT after two days of violence at the Capitol, Kinzinger’s relatives wrote, “Oh, what a disappointment you are to us and to God! … You have embarrassed the Kinzinger family name! … We are thoroughly disgusted with you!! And, oh, by the way, we are calling for your removal from office.”

All this and more only goes to prove that while Trump might not be the president anymore, he still is the most powerful individual politician in the US, both in political and social context.

While a simple and straight answer would lean towards Yes, nothing is so straight and simple about controversies and distrust in politics. Especially the divides that Trump’s presidential term has created among American, and especially among his own party members. After losing the presidential race in 2020, Trump made it clear that he intends to run for the White House again in 2024. In fact, the prospects of support from his own party GOP were quite high, at least till the insurrection at the Capitol took place. A large portion of Trump’s loyalists and fellow Republicans withdrew their support after the insurrection. 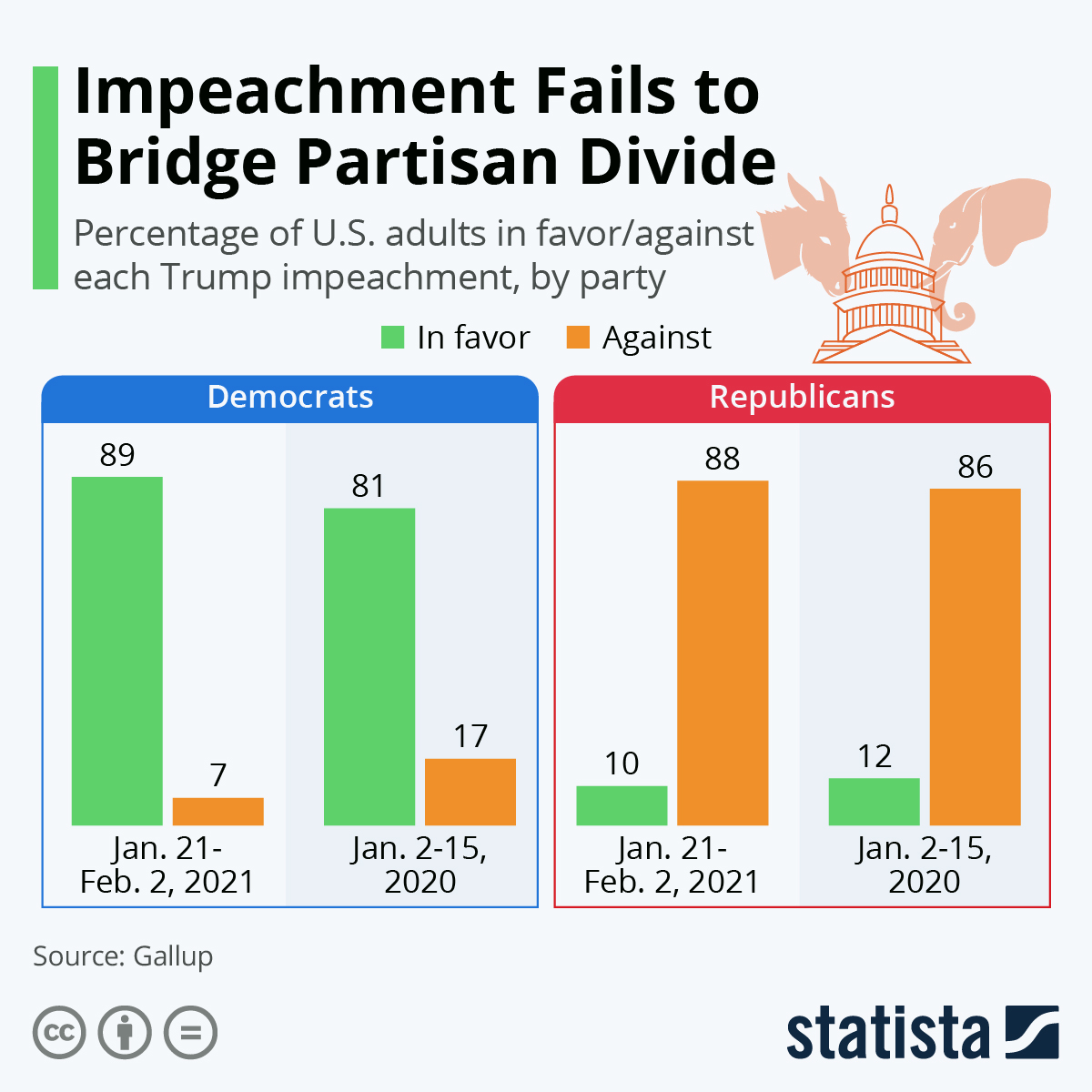 But this does not mean that Trump stands alone. A few weeks ago, Republican leader Kevin McCarthy met Trump to convince him to draw stakes in the interest of Republicans during the midterm election in 2022. Republicans understand that despite the domestic and worldwide condemnation in unison of the Capitol attack, there is still a large population of conservatives who vouch for the former president. Furthermore, Trump had also expressed his wish in January to form an entirely new ‘Patriot’ party if he had to. However, after the reconciliatory meeting with McCarthy, those ambitions have come to a halt as of now.

The road to 2024 might be free from the hurdle of impeachment, but as powerful as Trump might feel, he would still face the challenge of fellow GOP politicians who no longer want to place their loyalty in him. During the impeachment vote in the House of Representatives, as many as 10 Republicans voted to convict Trump as guilty for inciting Capitol riots. This speaks volumes about the divide among Republicans – one that is deep, stark and problematic – if Trump still possesses presidential ambitions. The divide among the Republicans persists with 7 Republicans voting in favor of impeachment yet again. But the censorship of such Republicans only goes to prove that Trump still has a strong hold over the GOP fortunes which might be an indication of a 2024 return. After all, Trump has survived impeachment and remains so powerful a politician to be GOP’s best bet in 2024, and this cannot be good news for the Democrats.

9/11, Flat Earth, Brexit, QAnon: Why We Fall For Conspiracy Theories