9/11, Flat Earth, Brexit, QAnon: Why We Fall For Conspiracy Theories

What are Conspiracy Theories if not an unintended consequence of our ‘Desire to do Good’.

Released in 1999, Boondock Saints is a movie about two brothers who become vigilantes to rid Boston of crime in the name of God. The movie scored a paltry 28% on Rotten Tomatoes, with the consensus among critics being that it is “a juvenile, ugly movie that represents the worst tendencies of directors channelling Tarantino”. But while it did not get much love from critics, it has an audience score of 91% (250,000+ ratings) and a rating of 7.8 on IMDB (227,292 ratings). This disjuncture between the opinions of the connoisseurs and the rest would not matter much to anyone except movie trivia buffs, but for the idea that lies at the heart of its message – “…we must all fear evil men. But there is another kind of evil which we must fear most, and that is the indifference of good men.”

We live in a world today where we are bombarded daily with news of suffering and injustice from across the planet. If such misery is even partly the result of the indifference of good people, then the moral imperative for all us good people must be to stop being indifferent. The boondock saints who shot their targets took their call to action from holy scripture. But for most of us whose actions are limited to tweets, posts and forwards, a belief in our goodness needs only be accompanied by the itch to do something. The brothers in the movie, of course, have it easy – there are a bunch of bad people who do horrible things and eventually, need to be killed. The rest of us rarely have the benefit of such a clear plan of action. The world is a complex place and even if the victims are sometimes easy to identify, the perpetrators may not be. This creates the need for explanations, borne out of a need to understand: who, what, when, how etc. So we trawl the internet, hero-worship journalists, and join fan clubs of podcasters. Sometimes we may even come up with our own but in most cases, we rely on theories that other people come up with and relay it to others that we know. The trouble is that no one has the specific expertise, time or the energy required to distinguish good theories from the bad ones or probe the evidence underlying theories of everything that concerns us.

All of us, well-intentioned, self-styled saints, with (at best) an imperfect understanding of a world we so desperately want to change. What could go wrong?

The leave campaign led by the current UK Prime Minister Boris Johnson had claimed before the Brexit vote that the UK will ‘take back control of roughly GBP 350 million per week once accounts are settled with the EU’. This claim was rubbished by the UK statistics authority, but many still argue that such false claims are the reason why there should be a second Brexit referendum. Claims like these are often used as the prototypical example of fake news and all that is wrong with information dissemination. It is likely that a populace that thought themselves hard done in recent times would buy into the theory that posits the EU as the culprit. But if factual inaccuracies were the only problem we were dealing with, then an updated Britannica encyclopedia would solve all our problems.

If factual inaccuracies were the only problem we were dealing with, then an updated Britannica encyclopedia would solve all our problems.

The Brexit vote may have been swayed by a wide variety of false claims, but the false claims of the leavers had little to do with the opinion polls being so wide off the mark. The claims of all polls, surveys or for that matter almost any forecast are unverifiable ex-ante. But they are often times our only insight into how we can expect others around us to behave and therefore are key determinants of the actions we choose. Claims by newscasters about happenings in faraway lands, by national governments on the number of Covid-19 infections, by purported experts on the state of the planet are all unverifiable by the average individual.

These theories can often be passed off as factual, or at least grounded in facts. They may even have a few numbers as proof of their accuracy, but these numbers are rarely the final word on the matter. Experts in the same field often disagree on what is critical in explaining something, what needs to be measured and how. Truth claims can rarely be made with finality about almost anything and pretending that they can, only makes it easier for us saints to find our next target. For instance, Linus Pauling, a two time (unshared) Nobel prize winner, popularized the idea of vitamin C as a cure for the common cold. The best modern research suggests that it does no such thing. Was Linus Pauling’s work funded by big pharma or maybe, big fruit?

False claims can be countered with by facts. Most unverifiable ones unravel over time, others become irrelevant as more concrete alternatives come up. But those that cannot be proven wrong by design are likely the most insidious. These tend to mimic religions and have some version of ‘God works in mysterious ways’ to fortify themselves against any efforts to disprove them, exhorting belief more than reason. 9/11 as an inside job, Flat earth ruled by ‘Reptiloids’, Pizzagate and QAnon are some examples, though the list is a long one and not all of them are so out there. Many claims about community X owning the media, the ‘true’ fascist nature and beliefs of political parties and even the perceived impact of certain social constructs, are stated in a way such that they are almost impossible to falsify.

But if those who believe in such claims cannot be convinced, there are still who keep trying, then there likely be (1) lots of preaching to the choir and (2) frequent clashes between the two. 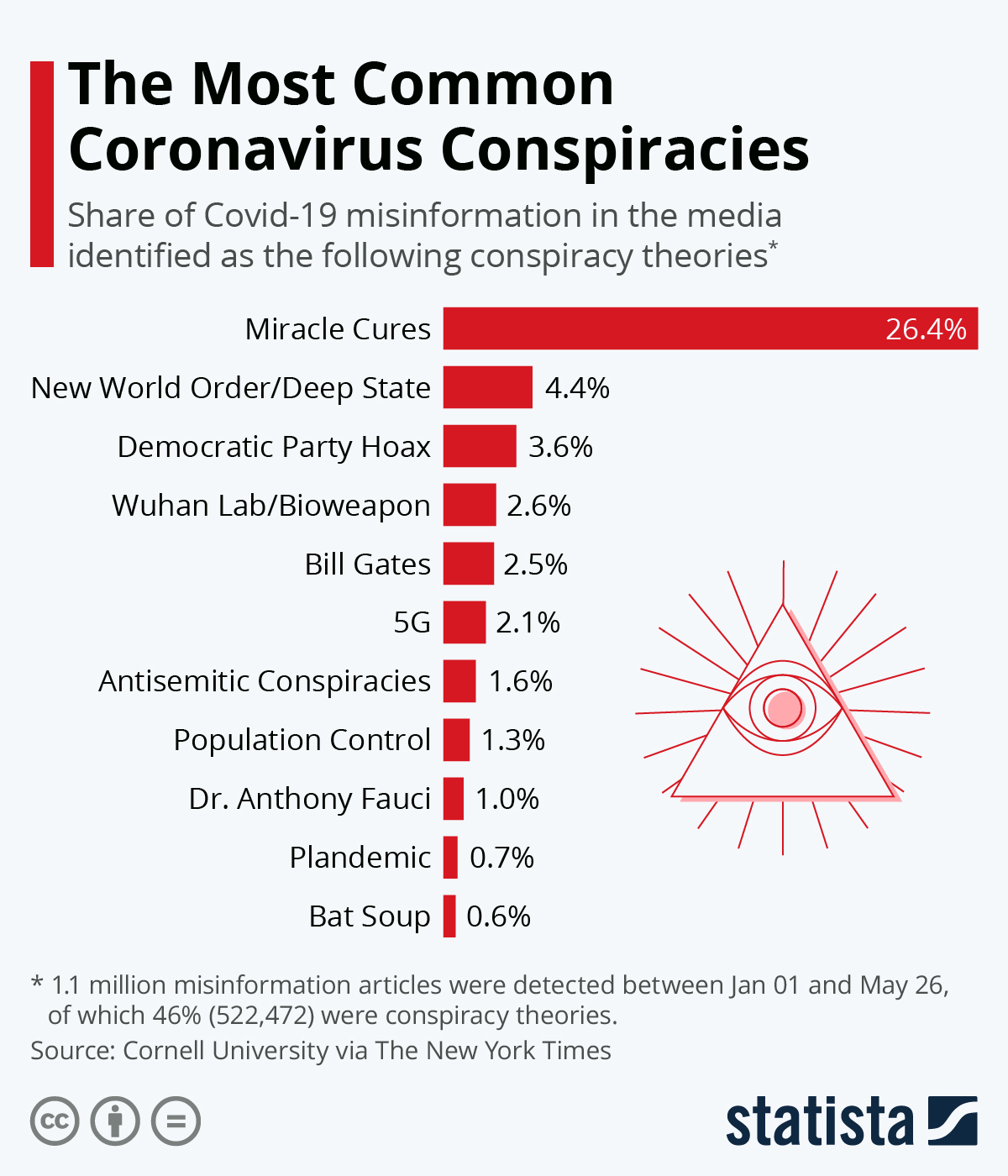 The Conspiracy against Conspiracies

There are a whole host of suggestions about how most of us can try to guard against misinformation and conspiracy theories. Some require educating ourselves in the rules of logic, others prescribe more careful selection of information sources, still, others warn against falling prey to our innate biases. Along with these, an adequate understanding of history to be able to contextualize current events would also be the top of many suggestions. There is no denying that all of these will help, but they require more effort, time and skill than most of us possess or are willing to spare. Perhaps of even greater concern is how teaching intellectual self-defence techniques to young students is increasingly coming up short with an entire generation of students coming to universities to seek vindication of pre-held beliefs, rather than learning how to question them.

Perhaps the situation we have landed in calls for something more drastic, something that addresses the root cause of the problem: stop thinking of ourselves as the boondock saints. If the indifference of good people is evil, too many good people not being indifferent isn’t all sunshine and roses either. There is no all-knowing, all-seeing person and therefore, no one can fix all the bad things they get to know about. In the professional sphere, most of us are rewarded for being highly specialised and consequently, most of us understand some specific things very well. In those specific areas of our competence, we can do our best to ensure that the best possible outcomes transpire. In all the others, being good is simply insufficient to fix any real problems and can create unforeseen issues. Willingness to do something creates the need to know, which feeds our need for explanations and theories that we cannot fully test or understand.

The simplest way to break this cycle is to make our peace with the simple fact that we cannot do much about most of the misery that is inflicted on the people who live in this world.

Acquitted Again, Trump Is Still The Most Powerful Politician In The US