The economy, Covid-19, jobs, immigration, climate change and social justice were the immediate challenges at hand when Biden first entered the oval office.

Joe Biden took office under difficult circumstances. Primarily, the new president was tasked to rein in the economy and the deadly coronavirus, to restore normalcy to American life, to create more jobs, to design a fair and humane U.S. immigration system, and to tackle climate change more aggressively.

In his first 100 days as the U.S. president, Biden has achieved most of his early goals. Some promises have proved to be tougher for him, and are still work-in-progress. On others, he is waiting for the Congress to act. 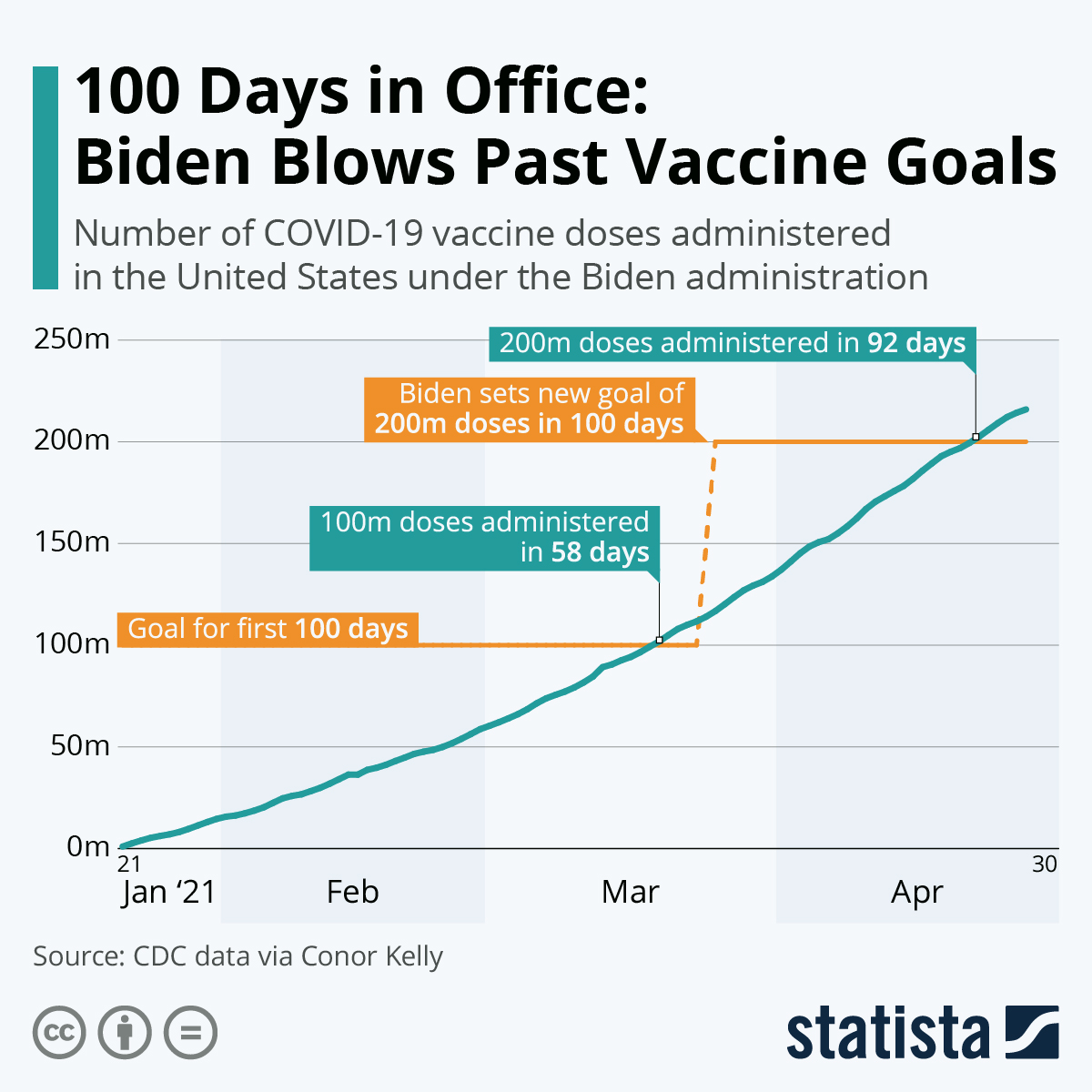 As part of the $1.9 trillion American Rescue Plan Act or the COVID-19 Stimulus Package, the Biden administration sent out over 100 million payments of the $1,400 stimulus checks to qualified Americans’ bank accounts.

“This historic legislation is about rebuilding the backbone of this country and giving people in this nation – working people, middle-class folks, people who built this country – a fighting chance,” said Biden.

Though Biden’s vaccination campaign built on efforts started under Donald Trump (Republicans often accuse Biden of undoing the Trump administration successes), his plan to add mass vaccination sites in order to aid distribution helped about 96 million Americans get fully vaccinated. As per Reuters, over 3,000 Americans were dying per day when Biden took office. Now that figure is under 700 a day.

Over 3,000 Americans were dying per day when Biden took office. Now that figure is under 700 a day.

Once mocked by the Republicans as “Sleepy Joe”, Biden spent much of his first 100 days in office to passing the $1.9 trillion American Rescue Plan. The U.S. economic growth is expected to top 7% this year, the fastest since 1984, thanks to Biden’s $1.9 trillion stimulus package.

According to the Commerce Department, gross domestic product increased at a 6.4% annualized rate last quarter – the second-fastest GDP growth pace since the third quarter of 2003. Incidentally, the COVID-19 Stimulus Package, aimed at limiting the pandemic’s economic fallout, was opposed by the Republicans.

According to the US Bureau of Labor Statistics, the U.S. economy has added 1,384,000 jobs since January 2021 – the most jobs created in the first 100 days of any presidency since records began. Since April’s numbers are yet to be published, number of jobs created in Biden’s first 100 days in office is likely to increase. New York Magazine notes:

“He is relentlessly enacting an ambitious domestic agenda — signing legislation that could cut child poverty by more than half, expanding Obamacare, and injecting the economy with a stimulus more than twice the size of what Obama’s Congress passed in 2009 — while arousing hardly any controversy.”

From scrapping the Keystone XL oil pipeline permit to imposing a “temporary moratorium” on oil and gas leasing activities in the Arctic National Wildlife Refuge, from re-joining the Paris climate agreement to hosting a global climate summit, Biden has delivered on a number of his biggest campaign pledges focused on climate change.

Within days of his presidency, Biden issued an executive order seeking the Senate’s consent to ratify the Kigali Amendment to phase down hydrofluorocarbons (potent greenhouse gases used as refrigerants, solvents, and etching agents in silicon chip manufacturing).  The Kigali Amendment aims to put the climate crisis at the centre of U.S. foreign policy and national security. A statement from the White House said:

“The United States and the world face a profound climate crisis. We have a narrow moment to pursue action at home and abroad in order to avoid the most catastrophic impacts of that crisis and to seize the opportunity that tackling climate change presents. Domestic action must go hand in hand with United States international leadership, aimed at significantly enhancing global action. Together, we must listen to science and meet the moment.”

In mid-April, Biden announced a goal to cut emissions in half from 2005 levels. To meet that goal, he also laid out a $2 trillion infrastructure plan that includes billions in investments in electric vehicles and clean energy.

Biden had promised to raise the refugee cap to 125,000 from the 15,000 set by his predecessor. However, he broke the promise saying he would stick to Trump’s 15,000 cap due to “humanitarian concerns.” After facing a backlash from Democrats, his administration shifted gears and said it would increase the refugee cap in May. 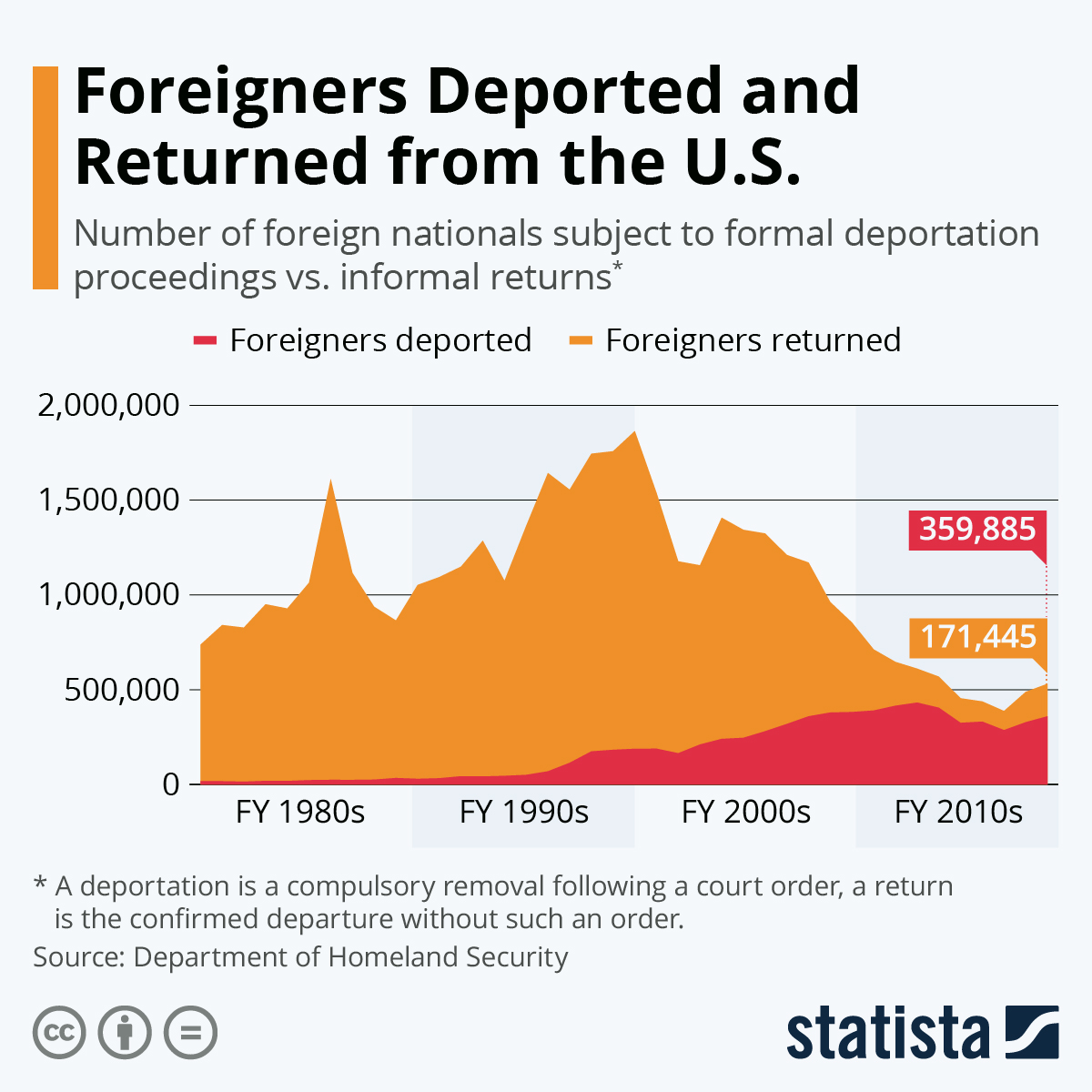 The Biden administration has also struggled to keep up with the influx of migrants coming to the U.S. southern border. Ronna McDaniel, Republican political strategist, observes:

“Republicans’ strong, common sense approach to the border delivered results — in March 2020, only 34,000 migrants attempted to cross the southern border. This March, after undoing common sense policies, Biden has presided over 170,000 migrants crossing the border, including nearly 19,000 unaccompanied kids — all during a global pandemic. Predictably, cartels are making a huge profit off of the human misery that Biden’s policies have created.”

The U.S. legislators are yet to pass Biden’s immigration reform bill. Introduced in the House of Representatives and Senate in February, the plan aims to create an eight-year path to citizenship for millions of unauthorized immigrants in the U.S. as well as provide a fast track to citizenship for immigrants brought to the country illegally as children. 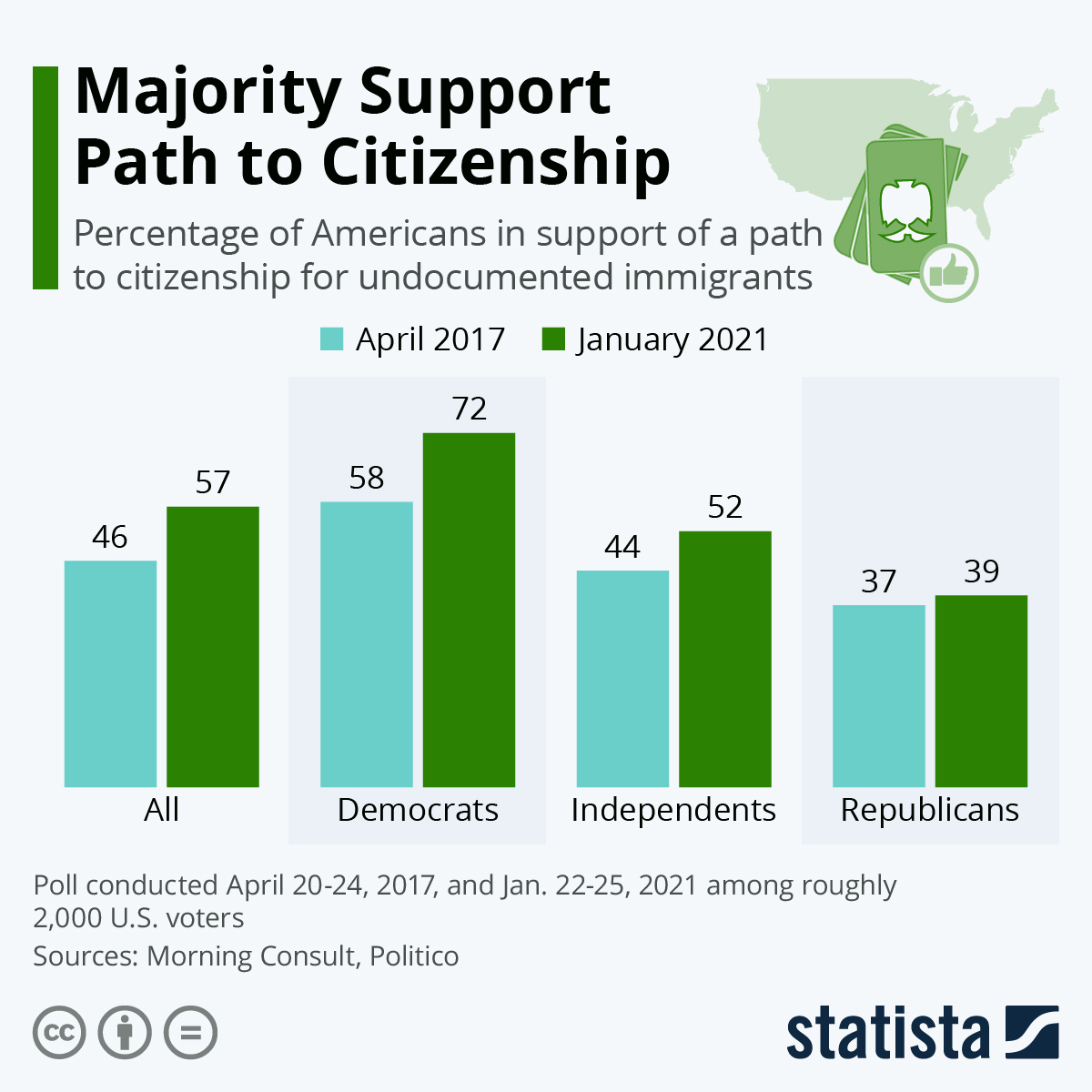 Biden had promised a historically diverse Cabinet. “We’ll have it all out there. You’re going to see significant diversity. I’m not going to tell you now exactly what I’m going to do in any department, but I promise you it will be the single most diverse cabinet based on race, colour, based on gender that ever existed in the United States of America“, said Biden. 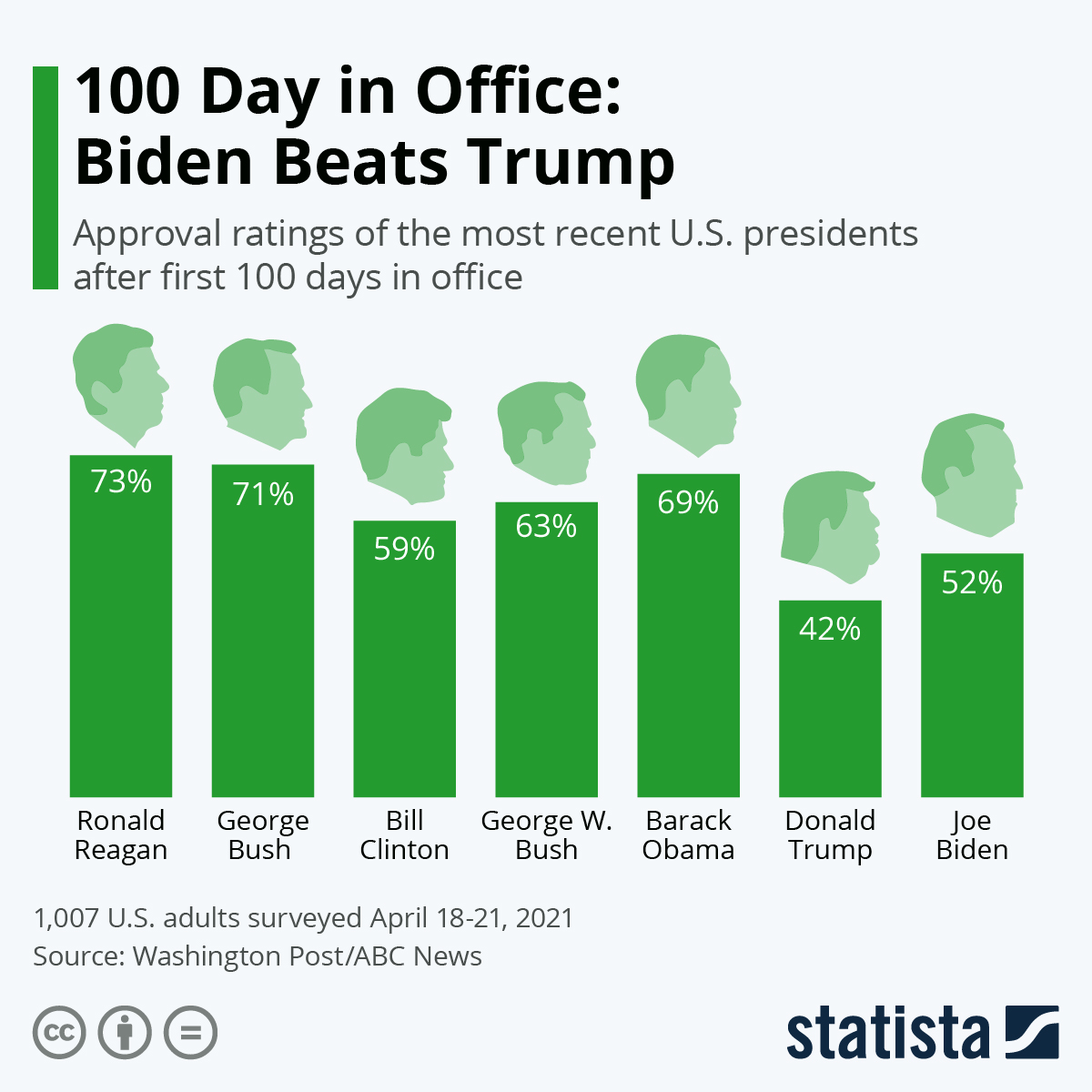 Apart from signing an executive order in January to repeal the Trump-era ban on transgender Americans joining the military, Biden also issued an executive order to combat discrimination based on gender identity or sexual orientation.

Biden also disbanded Donald Trump’s presidential 1776 Commission established to rally support from white voters following a slew of Black Lives Matter demonstrations across the country. “President Biden believes gender identity should not be a bar to military service and that America’s strength is found in its diversity. America is stronger around the world when it is inclusive,” said White House press secretary Jen Psaki.

India's Covid Chaos Too Much To Digest? Wait For Climate Change