India has emerged as the third-largest venue for unicorn and future unicorn startups despite the pandemic.

The pandemic could not dampen the sky-high valuations for Indian startups, with 10 new unicorns or billion dollar companies, being created so far this year, the highest so far. In 2019, nine startups turned unicorns, while there were eight in 2018, according to the latest data from Venture Intelligence. The Indian startup ecosystem saw $10.6 billion of Venture Capital investments in 2020 so far, much behind the $12.5 billion seen in 2019 and also marginally lower than the $10.9 billion and $10.7 billion raised in 2018 and 2017 respectively. 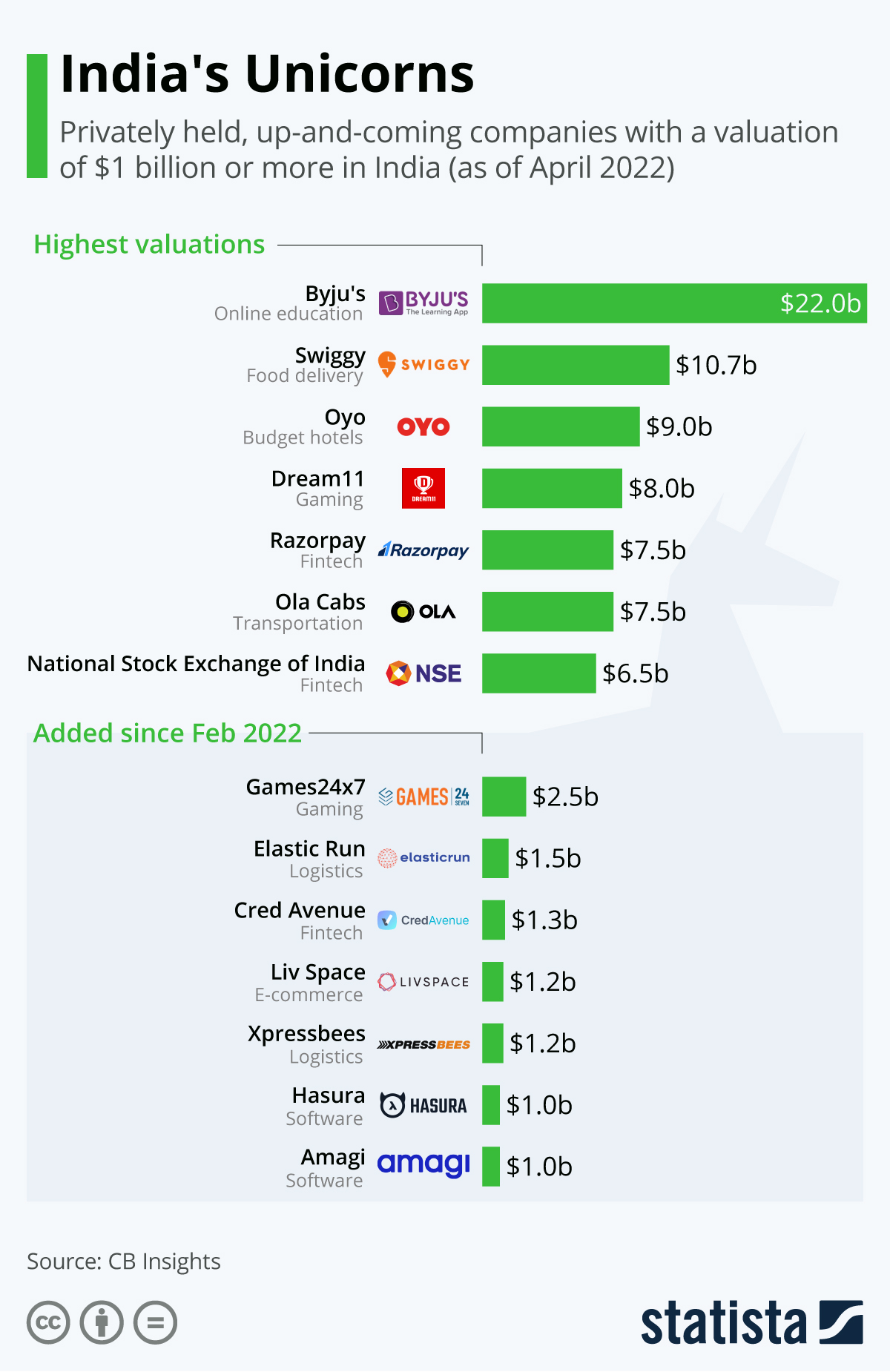 The unicorns of 2020 are Pine Labs, Unacademy, Postman, Nykaa, Dailyhunt, Zenoti, Razorpay, Zerodha and Glance. The outbreak of venture capital funding in the Indian startup ecosystems were led by the ecommerce and edtech sectors, with Byju’s swooshing as much as $1.35 billion in funding this year, followed by Zomato, which raised $660 million.

Related: 11 Startups To Invest In For Blockbuster Gains In 2021

CRED is a credit card payments startup founded by Kunal Shah in 2018. The company is committed to protecting the data and information of its members. CRED works on the guiding principle of opt-in consent and full transparency. The company’s security processes and technology implementations combined with regulatory compliance is how it access, store and use member data. The startup raised $147 million in funding till date from investors like Sequoia Capital, Ribbit Capital, RTP Global, and Morningside Venture Capital. Angel investors like Max Levchin, Jitendra Gupta, Koh Boon Hwe, Mukesh Bansal, Amrish Rau, Gokul Rajaram, Sriram Krishnan and Sriharsha Majety have backed the company.

Vedantu is an online tutoring platform founded by Vamsi Krishna, Pulkit Jain, Saurabh Saxena and Anand Prakash in 2011. The e-learning company features real-time personalized learning. It provides a software platform connecting tutors and student, which provides real-time one to one teaching to students online. The startup has more than 500 teachers and one lakh paid users till date. The Ed-tech startup also hit the milestone of 1 million users who have attended live classes in the last two months. Vedantu has raised $85 million from Tiger Global Management, Accel Partners, Omidyar Network, WestBridge Capital, etc. The startup has raised $100 million in series D funding led by US-based Coatue in July 2020.

Moglix is a B2B ecommerce startup backed by Ratan Tata. This top performing Indian startup in 2020 also featured on the list of 50 future unicorns. Moglix is based in India, which was founded by Rahul Garg in 2015 with the aim of bringing in revolution and exciting solutions to global e-commerce. The company specializes in procurement of industrial products such as MRO, safety, electrical & lighting, cleaning & laundry supplies, office supplies, tools and many more industry essentials. The team brings in experience from large global and e-commerce companies like Google, Amazon and Snapdeal.

Watch: Moglix Founder on the path to Profitability

Nykaa was founded in 2012 by Falguni Nayar and is headquartered in Mumbai, Maharashtra. Nykaa is an e-commerce platform for various beauty and wellness products for men and women. The company offers comprehensive content that includes product reviews, videos on beauty how-to and blogs by experts. Nykaa’s products are authentic and they are sourced directly from different brands and provide a delivery experience to the customers. The startup has entered the unicorn club with its fresh funding of $13 million from its existing backer Steadview Capital. The recent investment funding has taken Nykaa’s valuation over $100 million.

Related: 11 Startups To Invest In For Blockbuster Gains In 2021

Daily Hunt is a software mobile application company, which was founded by Virendra Gupta in 2007. The application provides updates on trending topics. The mobile application company offers news, books and magazines online. The company serves customers in India. The Bengaluru based company becomes a unicorn with $100 million funding from AlphaWave, Google and Microsoft. The new capital raises the company’s value at over $1 billion making it the first unicorn in tech for local languages. The company plans to utilize its new capital to scale up its short video app Josh and expand its local language content in order to leverage artificial intelligence and machine learning in it.

Cars24 is an online platform to buy and sell second hand cars has become India’s latest unicorn by raising $200 million Series E funding round led by DST Global along with other existing investors including Exor Seeds, Moore Strategic Ventures and Unbound. The company was founded by Vikram Chopra in 2015. The online platform facilitates the transaction and has an offline presence. The company’s services also include paperwork like transferring ownership, total end-to end process. The latest funding has taken company’s valuation over $1 billion mark. The investment will be utilized towards innovation of technology and product apart from scaling new business vertical.