5 Jobs That Robots Will Monopolize In The Next Decade

From self-driven cars to robotized fulfillment centers, AI-based robots have been changing human lives one step at a time. Here’s a list of whom Robots will replace first, industry-wise.

There has been tremendous speculation over the fact that robots will replace humans and eventually establish a monopoly in many critical jobs around the world. While this is debatable to a large extent, it is vital to understand that independent robots/ robots performing side by side with humans are not a sight in the near future. Introducing robots for dozens of activities is a welcome change. However, it is vital to consider some of the challenges in reality before making far-fetched assumptions.

AI-based robots may reduce car accidents, keep emergency rooms safer, and much more. It is time to accept the fact that robots are smarter, faster, and better than humans. However, it is also vital to understand that robots are good at different things and can never really replace humans. For robots to perform better, humans must make environmental changes.

AI-based robots have already begun making a difference in human lives. Not startups, but e-commerce biggies like Amazon have started utilizing small and flat robots to make those one-day deliveries happen for their customers. These tiny robots shimmy around and behind enormous shelves at the warehouse. They can do so because there are papers taped in to guide them to avoid collision with each other or humans. The reason for warehouses to use these robots is that they are cheaper when compared to their counterparts, and have more sensors. Even when we use robots with high sensors, it will be a challenge when humans begin working alongside them. While they can be programmed to slow down and halt if a human is in proximity, safety challenges may arise when working together. 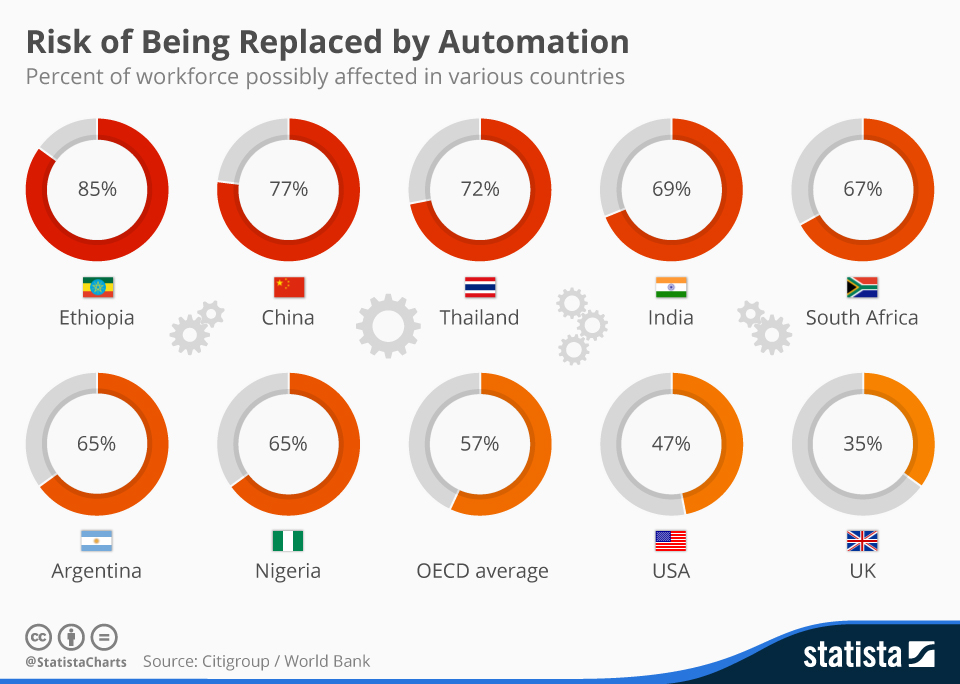 Autonomous cars may require a lot of infrastructure changes. Crosswalks, ramps, orange cones, traffic lights, and speed limit signs are just the tip of the challenges, and there are dozens more to be resolved. Robots can perform the best with their sensory system but, deriving meaning from it and performing accordingly may be another thing.

Nevertheless, robots have successfully passed the test as cost-effective alternatives to humans. More use cases are coming out everyday. While unemployment around the world is at an all-time high amid the Covid-19 pandemic, robotic innovations have helped corporates further experiment with robots for tasks humans used to perform. Gradually, robots are moving towards a monopoly of jobs on a large scale, a paradox we will have to eventually solve.

Some of the industries where robots have begun to take over from humans:

Planes fly in lanes. They follow the virtual trail and stay on them for safety. This navigation system enables pilots and air traffic controllers to track the location of the plane. The Military in the USA is already using autonomous drones for surveillance and may soon replace cargo planes.

Robots are capable of managing prescriptions for their customers. Robotics can manage to work in a smaller space, reduce mistakes, and work faster than their human counterparts. Robots can dispense medicines, meaning they can find the prescription, find the fitting containers, fill them and stack them based on instructions. But pharmacists do much more than dispensing medicines and will not be replaced by robots.

Packaging, stockroom, and warehousing might be the best place to use robots because of the repetitive physical work. Finding the shipment, packaging it, attaching the necessary labels with the required information can all be done by a well-programmed robot and save humans from the mundane job and enable them to perform better at something else.

ATMs have replaced human workers for withdrawal/ deposit, balance check, and many other day-to-day activities. We already find self-checkout lanes at grocery stores, and one person manages these lanes. It means there has been a tremendous cutdown of human hours already. 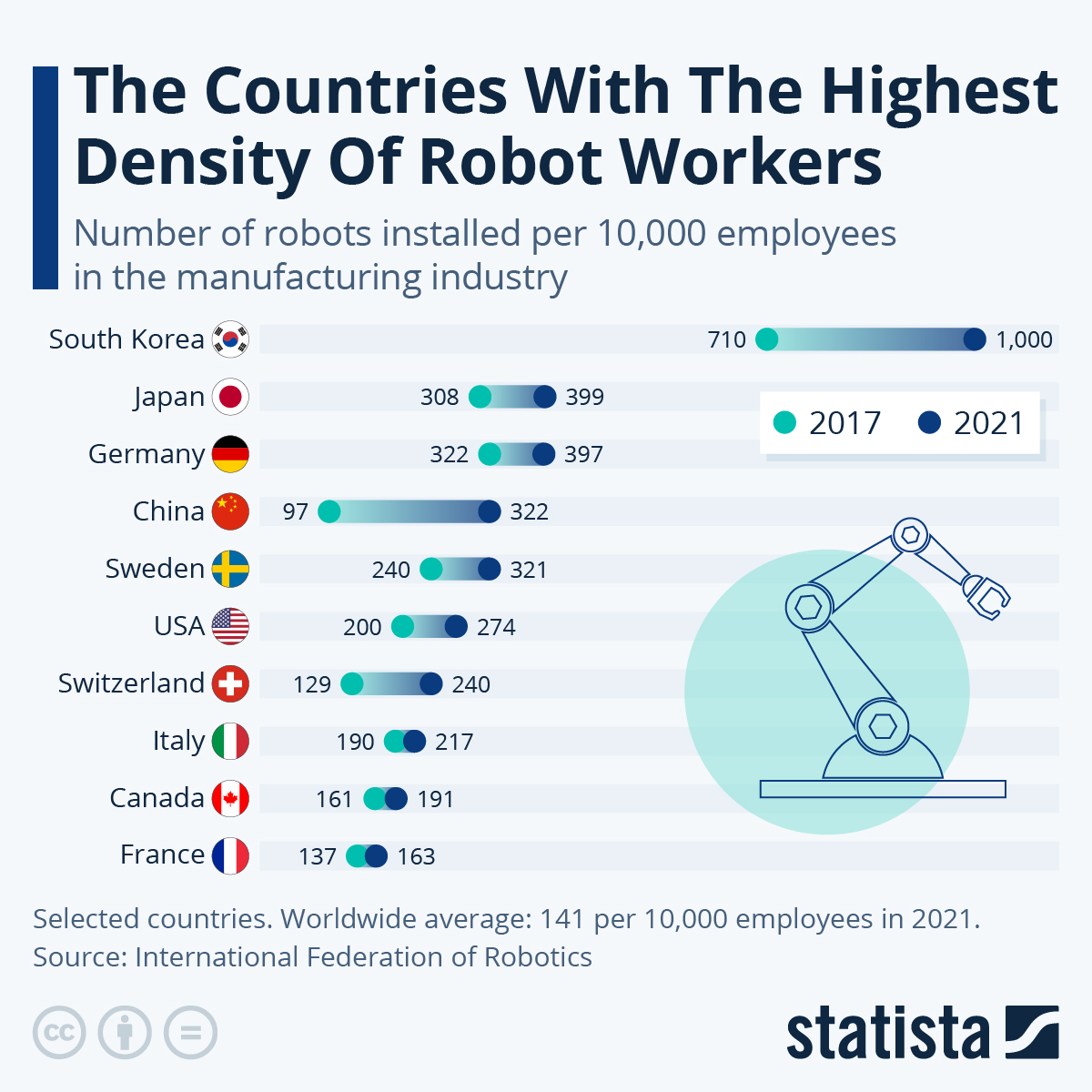 Robots can build the body of the car and participate in car assembling at large manufacturing plants. But seats, installing wires, dashboard elements, and a few other parts may still require humans. Robots are currently working separately in a separate facility. For robots to perform at full capacity alongside their human counterparts, they may have to be freed from their caged facility and this may require a lot more changes both in terms of technology and environment.

Robots have reduced the human workload tremendously and also made it safer for workers in a variety of hazardous working conditions. There is a lot of improvement required to enable a fail-safe technology to enable robots to work alongside human co-workers. Scientists have been making dynamic changes and have been successful in creating virtual fences. In a world where man has to now ensure that machines don’t threaten its monopoly of jobs, value and money, the first human and robot interaction of work side by side to each other can be challenging. However, over time, as both humans and robots become accustomed to working beside each other, shared resources and changes in human environments may make it possible even enjoyable to work amicably.

Education: Masters in Business Administration with Human Resources and Marketing, Visvesvaraya Technological University. Surabhi was a human resource professional for 9 years and is now on a journey of penmanship. She is a freelance writer with over 5 years of experience creating SEO and Creative content in niches like Business, Education, and SaaS on digital platforms like Edinbox, Sprout24, and Pixel Architect. Surabhi enjoys gardening, reading, and following world news when she is not writing.