Having suffered huge losses in market share in 2020, Chinese telecom giants, especially Huawei has been watching with bated breath as to how the new US-China trade terms will pan out under President Joe Biden.

Following a tumultuous relationship with Huawei throughout his term, President Donald Trump’s parting gift was a nail in the coffin for the telecom supplier. On January 18, the Trump administration had notified Huawei suppliers that it is revoking certain licenses to sell to the Chinese company and intends to reject dozens of other applications to supply the telecommunications firm. Already reeling under what PRC mouthpiece Global Times calls “the US’ relentless assault”, Huawei is justified in its worry about the future.

There is no denying that the US-China trade tensions precede Trump’s tenure. However, Trump did cut deep into the conflict by laying extraordinary tariffs and sanctions on Chinese tech firms.

Famously vowing, in his 2016 election year, to very quickly “start reversing” the US goods trade deficit with China, President Trump continued his anti-China rhetoric throughout his Presidency. The rhetoric grew in intensity following the Covid-19 pandemic that the US is still grappling with and has been a major factor in Trump’s loss.

Related: Facebook Joins Google Under The Antitrust Scanner, Big Tech Wakes Up To A New Reality

However, economists play down the consequences of the trade war that was sold as a plan to bring China to its knees. The Trump Administration’s idea was to knock out the ‘Dragon’ in trade deficit by choking off the American market with 25 percent tariffs on Chinese imports and in turn boost American exports. Analysts believe that notwithstanding the heavy sanctions, China emerged strong and continued to grow once China got the virus under control within its borders. Growing demand for medical supplies and work-from-home gear expanded its trade surplus with the U.S. despite the prohibitive tariffs. 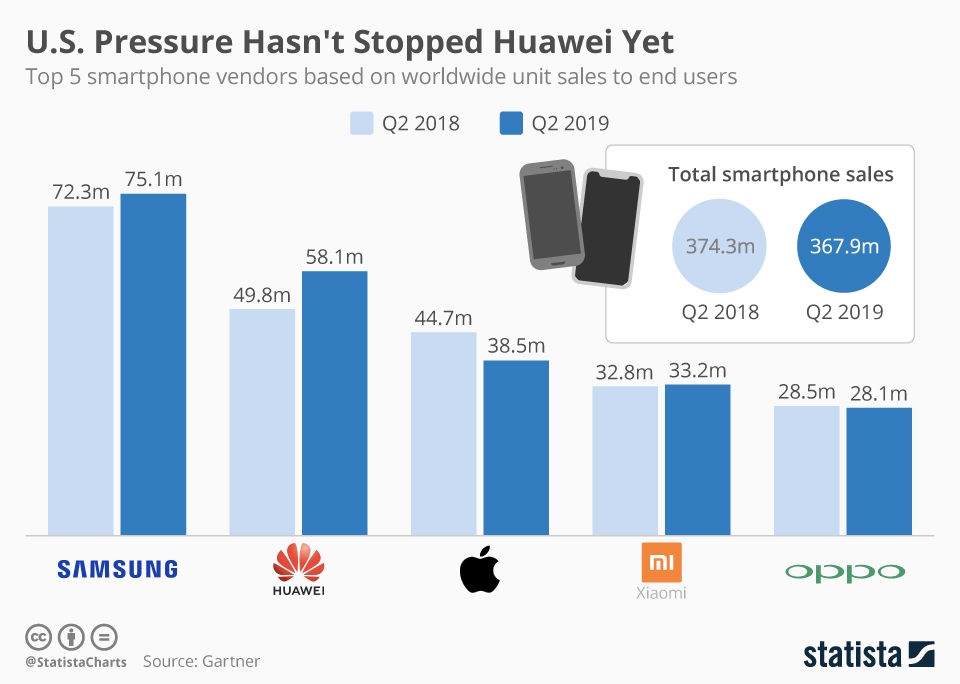 Yet, the mood in China is sombre. Huawei, denying Trump’s charge that their equipment poses a security risk, initially remained largely silent about its prospects under the Biden administration.

Huawei looks to Biden for its re-entry

Following Biden’s inauguration, the company made the firm’s founder Ren Zhengfei’s comments praising US tech public. According to a Reuters report, in a letter to the staff dated June 2020, Ren said that the US remains a “beacon of technology” to be emulated and “China’s Huawei Technology should consider cutting products in the wake of U.S. actions against it.”

Global Times expressed worry about the growing surge in Apple share while reporting a “substantial drop in both smartphone shipments and market share in China market in 2020, following a tough year of US government’s strangle on semiconductors supply allowing US rival Apple to rise to fill up the void.”

Having said that, the report ended with optimism stressing that Apple’s growth pace might be “hard to sustain”, as other Chinese mobile producers such as Xiaomi and Oppo are also targeting the high-end smartphone market.

Watch: How Huawei has been disruptive for US tech market?

Reports of the Brazilian President Jair Bolsonaro backtracking on his opposition to bar Huawei from bidding for cellular networks at auctions in June have also injected fresh hope for the Chinese telecom maker. Quoting a local newspaper, Reuters reported that “financial costs potentially worth billions of dollars and the exit of ally President Donald Trump from the White House” are forcing (Bolsonaro) to retract on earlier position. Like Trump, Bolsonaro opposed Huawei on ‘unproven grounds’ that it shares confidential data with China’s Communist government. However, he has been facing resistance both within and outside his government on this stance given that China is Brazil’s largest trading partner.

Way ahead for Huawei — Ladder or Pit?

What the future holds for Huawei remains to be seen. The Biden administration has already vowed to work to safeguard American telecoms networks from “untrusted vendors” like Huawei that threaten national security. Moreover, there is mounting pressure from the Republicans on Biden to clarify whether he supports keeping Huawei Technologies Co. on a restricted trade list, who see his refusal to commit as “alarming” and “dangerous.”

It is being speculated that Biden too is likely to remain tough on Chinese tech firms like Huawei. Biden strategy is likely to up America’s internal research and development and build an international tech alliance which is spearheaded by the United States. What will become critical in the ensuing months and years is who amongst the world’s two biggest economic powers wins over the developing markets — Africa, Latin America, and Asia.

Education: Jawaharlal Nehru University, New Delhi | Manjari is a senior content communications specialist who has worked extensively across print, broadcast and digital media. She has held key leadership positions in international media and publishing organizations. She writes extensively on sociopolitical and cultural issues.

As Facebook Joins Google Under The Antitrust Scanner, Big Tech Wakes Up To A Harsh New Reality