Lack of jobs in the market has already hit the common man severely. A double-digit contraction rate means India’s poor economy will bounce back at snail’s pace.

The first-quarter results in September exposed the drastic condition of the poor Indian economy. The Gross Domestic Product (GDP) hit an all-time low with a -23.9% contraction of the economy. The economy had hardly started showing signs of a nominal recovery post the Coronavirus induced slowdown when news of a Reuters survey brought back chaos in the market. The survey, conducted among 55 leading economists between October 13-21, shows the majority of them predicting a double-digit contraction for the Indian economy.

A Reuters survey conducted among 55 leading economists shows that majority of them predict double-digit contraction for the Indian economy.

What was even more worrisome — as many as 34 out of 39 economists — who took an extra question, said that the Indian government’s latest stimulus package wasn’t enough to boost the economy. Thirty five of them said that the economy would take at least a year to recover. 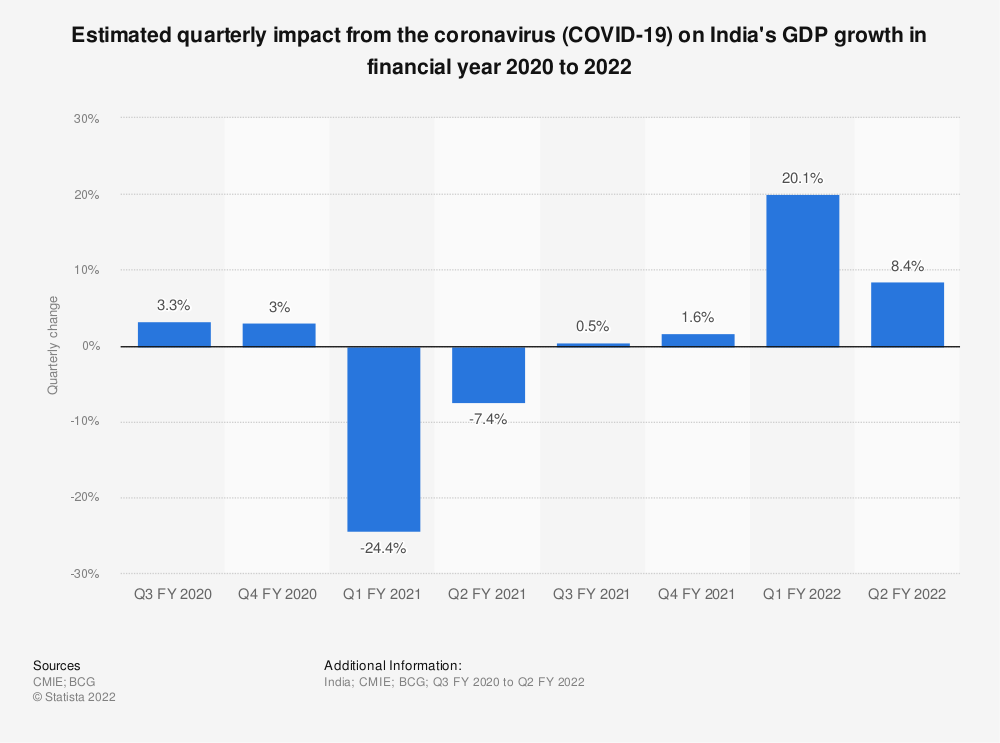 Where The Indian Economy Stands Now?

It needs to be highlighted here that in a recent policy review announcement, the Reserve Bank of India had said that the national economy would contract by 9.5%.for 2020-21. The RBI had also announced last week a fiscal stimulus to boost demand by $10 billion.

Watch: IMF Chief Economist Gita Gopinath on the State of the Indian Economy

It was just last month when the Asian Development Bank (ADB) had predicted that the Indian economy would shrink by 9% this fiscal. The good thing is the ADB had also predicted that the Indian economy would bounce back with 8% growth next year. But that’s a distant future and a lot will depend on how and what kind of policies the government implements to come out of the economic crisis which is exceptionally tough on the poor Indians.

34 out of 39 economists said that the latest stimulus package from the Indian government wasn’t enough to boost the economy.

What is the government doing?

The government has also announced measures to increase capital expenditure, including an additional Rs 25,000 crore package by the government, and long-term 50-year interest-free loans for state governments amounting to Rs 12,000 crore. The centre is reportedly considering an Rs 3 lakh crore package, spreading over six years, to create global supply chains in some sectors, providing tariff protection to key industries, and launching schemes related to urban employment.

How Will The Economic Contraction Affect You?

The government’s corrective measures will surely benefit people, but for a level of recovery institutions like the ADB are predicting, the government has to spend much more aggressively. But the problem is where will this money come from? At a time when medium and small-scale industries are the worst hit, crores of people have lost their jobs, and the tax collection is at a low stage, the government can’t generously open its purse’s strings.

The Indian government needs to spend much more aggressively.

The middle and lower classes are severely hit by the lack of jobs and pathetic new job creation in the market. The Centre for Monitoring Indian Economy came up with the job data for the first three weeks of October which shows a grim picture of employment recovery. The report says the unemployment rate in rural areas is lower than August and September, and much worse than May and June.

Watch: Raghuram Rajan on how the government can fix the Indian economy

The Recovery Until Now

The average rural employment rate for the first three weeks in October is 39.1%, lower than 39.8% in September, which was also the highest level since the March-April lockdown. Just to compare with where India stood a year back, the rural employment rate for FY2019-20 was 40.7%. The employment rate in urban India, however, has shown a minor recovery as it averaged 34.8% for the first three weeks of October, slightly better than 34.4% in September. However, it is still more than 200 basis points lower than the 2019-20 level. “The recovery was smart in May and spectacular in June. It maintained momentum in July, but stalled in August and September. It appears now that the stagnation could extend or worsen in October,” CMIE said in its weekly analysis.

The employment rate in urban India has shown minor recovery averaging 0.4% more in the first three weeks of October than the 34.4% in September.

Recently, an IMF (International Monetary Fund) official, Malhar Shyam Nabar, had said that the Indian government had to make efforts on the fiscal and monetary side, in addition to putting in place structural elements. He had said the government should have focused more on direct spending and tax relief measures and slightly less on liquidity support measures.

Even though the Indian economy made bad news of late, it also had some positive signs last month. Exports returned to 98.4% of normal in September, while imports rose to 73.7% of normal. The sale of automobiles also saw a rise with Maruti Suzuki registering a 34% jump in September. Demand for petrol rose for the first time after the lockdown. The Nikkei Manufacturing Purchasing Managers’ Index for India jumped to 56.8 in September from 52.0 in August. Anything above 50 is considered good.

As per the IMF, the Indian government should have focused more on direct spending and tax relief measures and slightly less on liquidity support.

These are good indicators for an economy on the path to recovery, but their broader impact on the job market is yet to be seen. Also, it is more important that the industry rose at the local level as exports or imports can’t be the only indicators for the recovery of a poor Indian economy.