For Tata-led Air India, Air Asia An Ally But Vistara A Rival

The car-to-coffee conglomerate, Tata Group’s hopes for partnering up with Singapore Airlines (SIA) shattered when the latter decided against investing in the debt-laden national carrier, Air India.

The Tatas stepped into the bidding process for the national carrier at the eleventh- hour and now looks set on acquiring Air India through its other commercial airline ventures or even by going solo. But the process has proved to be a snag with setting in motion a series of challenges. Even if the conglomerate succeeds in its acquisition, it will have to ensure operational synergies between its airline business post-acquisition, which by the looks of it, will not come easy.

Tata Group and SIA share a joint venture Airline, Vistara and it was through this that the salt-to-steel conglomerate had plans to bid for Air India in the coming month. Although, SIA has given their approval and waived their non-compete clause, Tata Sons, the holding company, is in a puddle as it will now have to go for a solo bid.

Tata Sons could however take another route through its Air Asia India unit which is again a joint venture Airline with Malaysia’s AirAsia Bhd. It has been raising its stake significantly, which is up from 51% to 87%, but there happens to be some legal issues with this approach.

The government has set a target of ₹ 2.10 lakh crores from disinvestments in this fiscal year through the sale of shares of central public sector enterprises (CPSEs), public sector banks and financial institutions, including the listing of insurance mammoth LIC.

The strategic disinvestment of Air India is a two-step process which includes, first, the submission for ”Expression of Interest” (EoI), which was completed on December 14, and second, the ”Request for Proposal”. So far, the government has received three EoI’s including the Tata Group and plans to carry forward the process of shortlisting bidders by the end of the month.

The government has also reportedly sweetened the deal which earlier required the bidding company to fully cover the airlines accumulated debt of more than 69,000 crores. Now, the bidder gets to decide how much of the debt he wants to take on. But he will have to pay at least 15 per cent of the quoted enterprise value to the government in cash, while the rest can be taken on as debt.

Tata may reboard the Air India after 67 years in what is dubbed as reunion of sorts after the group had to part ways with Air India shortly after the Independence.

Currently Air India has the third-largest (9.4 per cent) traffic share vis-a-vis domestic market compared to the Tata Group-owned Airlines – Air Asia India and Vistara which stands at fifth (7.1 per cent) and sixth (6.4 per cent) position in terms of market share respectively. Hence, for Tata group the acquisition would mean that the group’s airline business would top at 22.9% in market share, making it the second largest airline group in India, next only to IndiGo, which comfortably sits at 55.5% in market share. Tata hopes to dethrone IndiGo in the future with this acquisition to secure the numero uno position for itself. 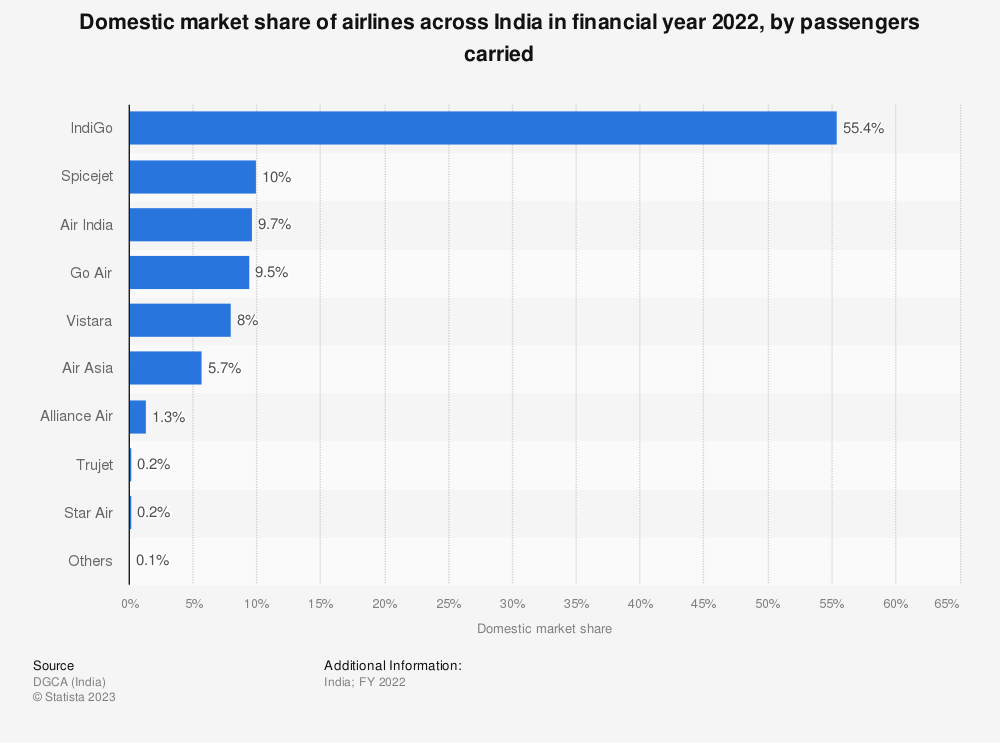 Also, the acquisition would have additional perks of control over prime 4,400 domestic and 1,800 international landing and parking slots, as well as 900 slots at airports overseas. The deal would also include trained and experienced staff and its ground handling services at major Indian airports.

With the events unfolding, the way Tata had not anticipated, Tata, if all goes well will be in total control of Air India and also of Air Asia India as AirAsia Bhd plans to exit its loss-making business in India. This will make Vistara, Air India and Air Asia India, direct competitors in the Aviation industry and may drive a wedge between the Singaporean Airline and the salt-to-steel conglomerate, Tata Group.

Though the Tata Sons hold a marginal majority stake (51%) than SIA (49%) in their joint venture Airline, Vistara. It will be to see how the situation unravels if the bid goes through for Tata, the likelihood of which is overwhelming. The government has extended its full support to the conglomerate post the conclusion of privatisation process, in case Tata wins the bid.

Post-acquisition of Air India, Tata Group intends to merge all its Airline business into one. So, the chances of Tata walking away from Vistara due to possible lack of operational synergy is not off the table.

Air India would need much attention and lots of fuel injection through pumping funds to get the stricken Airline up and flying. This would require crucial channelling of man-hours and funds that would have otherwise gone towards Vistara, but instead will now be loaded in the cargo bay of Air India and Air Asia India.

Education: St. Xavier’s School, Sahibganj | Currently pursuing BA(Hons.) Pol. Sci. (University of Delhi) | Ashutosh has a knack for media writing vis-à-vis Geopolitics, International Relations, Science and Technology, and Latest news. He has plans to pursue his Master's in International Relations and Area Studies. Apart from these, he has a keen interest in Astronomy and the underlying mysteries of the Universe. He can be found playing music in his leisure time and happens to be a movie buff and traveler in spirit. He loves to take on new challenges as he traverses through in his life.